The Relationship Between Boredom and Intelligence

Boredom and intelligence go hand in hand. Continue reading to find out how. 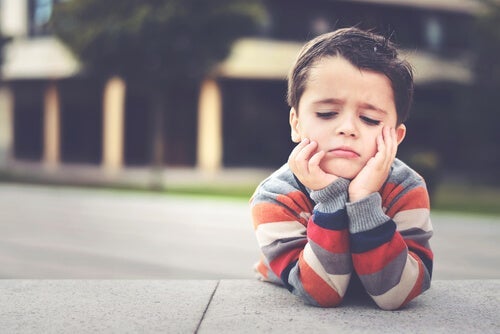 There’s an association between boredom and intelligence, according to several studies. However, the common belief that it equals lack of creativity or capacity for recreation is a mistake. In any case, higher intellectual abilities are definitely indicative of less boredom.

As far as children are concerned, certain parental attitudes can harass, overwhelm, and even saturate them. For example, the common tendency to think that the more extracurricular activities in a child’s schedule (languages, sports, or culture), the better off they’ll be, as they’ll have a more promising future. This is a big mistake.

In this regard, it’s good for the amount of stimulation a child receives not to be below a certain level. It’s also good to nurture multiple personal relationships. However, filling their time with so many activities can lead to over-stimulation and it isn’t healthy at all.

For this reason, the effort that many parents make to direct their children and keep them continuously busy turns against the interest they’re pursuing in many cases. Thus, children must actually be bored sometimes. This is because those are the moments in which they get to exercise their creativity. They’re quite capable of facing a void and figure out how to fill it.

“Never underestimate the determination of a kid who is time-rich and cash-poor.”

The origin of boredom

There are tasks people hold in high esteem because they cause great dissatisfaction. Of course, doing them over and over leads to a deep sense of emptiness and a desire to change and do something different.

This state is a signal, a tool that alerts you of a failure in your motivation when occasional. For example, it may be a signal associated with a decline in interest in the work you’re doing. However, this feeling doesn’t usually paralyze you. Quite the contrary, in fact. It prompts you to look for another activity that’ll entertain you and add more value to your life.

The relationship between boredom and intelligence is highlighted in a study published in the Journal of Health Psychology. It states that people with a high IQ are seldom bored. This is because they spend a good part of their time focused on their thoughts and this entertains, motivates, and stimulates them.

On the contrary, those with lesser abilities need a greater number of activities to somehow guide their attention, “fill” their day, and stimulate their mind, according to the same study. For example, they mention playing sports. You’ve got to be careful generalizing though because this doesn’t mean that highly intelligent people don’t like to socialize or engage in physical activity.

Furthermore, another study conducted by Singapore Management University and the London School of Economics and Political Science follows the same line. It concludes that the most intelligent people prefer to dedicate long hours to their goals and objectives rather than socialize with other people. Isn’t that interesting?

Boredom and intelligence in children with high abilities

The above situation shifts in the case of gifted children, as they’re highly precocious when it comes to learning. These children have a tendency towards boredom unless adults place them in special classrooms suitable for their educational needs.

Their cognitive development is above average in comparison to their peers. Thus, boredom and idleness arise if the pace of the classes is below what they need to keep progressing.

Hence, their attitude in class is one of continuous leisure and they distract easily. They don’t pay attention, don’t do their homework, and feel reluctant before, during, and after school. Also, they’re highly critical of their teachers and often show poor academic performance.

As you can see, boredom and intelligence are closely related. However, you must also take into account that not all children respond the same way. There are, of course, highly capable children who seldom experience boredom. There are also children with below-normal intellectual levels who are bored out of their minds. Individual differences are normal and acceptable, of course.

Boredom in children with high abilities can have serious repercussions on their physical and psychological health. It can even lead to major social, behavioral, and cognitive disorders, such as serious difficulties of adaptation and integration in their peer group and feelings of frustration. These turn into the kind of helplessness that makes them feel incompetent and rather anxious as the years go by.

These alterations aggravate if childhood professionals confuse boredom, given their high intelligence, with other conditions. ADHD, for instance, or learning or personality problems (the main characteristic of them is a lack of concentration in class).

Extreme and habitual boredom in adults can cause serious problems, as James Danckert, one of the leading experts on this subject, points out. He says that the tendency to depression, anxiety, or addictive behaviors increases when you experience it in these terms. In addition, it can be the cause of an obsessive-compulsive disorder or different somatizations. This is because it has a negative effect on physical and psychological health.

Nevertheless, occasional boredom can be healthy. Sometimes, when you’re oversaturated with the rhythm of everyday life, you may miss those little moments of “doing absolutely nothing”. Dedicate such moments to yourself and free your minds from time to time. It’s a great way to pay attention to your inner thoughts, which may also have something to tell you.

Boredom in Children – A Powerful Learning Tool
Today's article is about the power of boredom in children. For starters, you must understand that the human brain is designed for seeking stimulation. Read more »
Link copied!
Interesting Articles
Psychology Today
Coronavirus Panic Buying - What Does Psychology Say about It?

Empty shelves. Long lines with full carts. Nervousness, haste, sharing anxious glances with those around you, and the fear of…