The Psychological Implications of Eternal Unemployment

Do you know the psychological consequences of long-term unemployment? Learn about them with us! 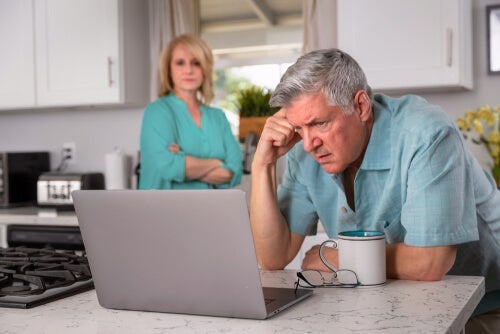 Think about something for a second. What does everyone do from the time they finish school and until retirement? You guessed it, work. And that’s the reality. If you don’t work, you can’t really live properly. Well, for most companies, a person over 50 years old (and even 45) isn’t as valuable as a young person.

Take a look at the different job offers in every single job portal. You’ll see that they always look for young people. Consequently, our “elders” (I’d like to really emphasize the quotation marks) are, on many occasions, and unfortunately, trapped in eternal unemployment.

In this article, you’ll discover all the reasons to reject senior profiles. We’re not going to say that they’re wrong or right. However, we’ll be delving deep into them. Do companies take into account the psychological implications of this eternal unemployment? I guess they’d rather avoid it. Well, that’ll be our topic today.

The first thing I’ll do is ask a series of questions. Are people over 40-50 years less capable of doing a good job? Does their age imply that they’ve lost the ability to work, learn, or improve? Do they have less knowledge of the area they’ve been working at all their lives? Or have they just lost the ability to be effective and efficient? Does this mean they’re no longer responsible individuals?

You’ve probably said “no” to most of the questions. And you’re right. Except for specific cases (certain jobs that require strength and physical agility), 40-50-year-old individuals are perfectly capable of doing a good job.

However, companies seem to have plenty of reasons not to hire them. In the latest Adecco Foundation survey, 200 human resource professionals were asked about the reasons for not hiring older profiles. Let’s see their justifications.

Are these irrational beliefs?

One of the most present cognitive biases in these beliefs is generalization or overgeneralization. Surely, most profiles with 25 years of experience won’t accept the same salary as a person with two years of experience. This makes a lot of sense. However, there’ll be others who, out of desperation or conformism, are willing to accept it. So why not ask before assuming that they’re just going to decline the salary?

The same goes for the out-of-date aspect we mentioned earlier. Many individuals probably didn’t continue studying since they’d learn everything at work. However, many other professionals enjoy taking courses, attending conferences, or even taking other degrees and masters to get new knowledge.

Moreover, all professionals must learn to adapt to changes, especially if the improvement of the company relies on it.

The same goes for thinking that all “older people” have medical problems that interfere with their performance. It’s true that, as the years go by, we all become more vulnerable to diseases. However, young people aren’t exempt from having a condition as well; what about a young smoker or someone with previous or chronic health problems?

Let’s see the “inability to adapt to a young work team” from a different perspective. What about an older person who feels excited about being led by a younger person because, that way, they can take advantage of their “freshness” and learn from them? Remember, we can all learn from each other.

In all honesty, the younger person may end up feeling intimidated. It’s possible that they have thoughts such as “There’s nothing for me to teach them” or “How can I be his boss if they were director of a multinational company two years ago?” These thoughts aren’t unreasonable by any means.

Think about it: “older people” are the living image of professionalism. Don’t all companies want professional individuals? Perhaps all organizations should realize that giving a tolerant company image is more important. Showing that they can combine junior and senior profiles well can be incredibly beneficial.

However, all these beliefs are so ingrained and widespread that CVs are rejected without reading beyond the person’s age. It came to a point where companies don’t even reflect on the benefits that hiring an older and more experienced profile may bring. As a result, the aforementioned eternal unemployment has risen.

Those over 50 years old represent 14.7% of the total number of unemployed people in Spain. The latest data from the EAPS indicates that six out of every 10 unemployed people over 55 have been in this situation for 12 months or longer. Moreover, according to the Adecco Foundation survey, 43% of the unemployed in this age group haven’t had a new job opportunity in over four years.

Put yourself in the shoes of a person who’s been rejected more than 300 times, has been unemployed for four years, and has a family to support (with school or university-age children) and whose partner’s in the same situation as them. It’s basically a recipe for anxiety, isn’t it?

Let’s now talk about the most frequent, and logical, psychological implications of this eternal unemployment.

It’s important to bear something in mind. If these emotional alterations continue for a long time, they’ll begin affecting the person’s daily life. In that case, it’s important for a mental health professional to interfere. They won’t give you a “magic pill” that’ll turn all problems around. However, they’ll guide you into maintaining a healthy routine, ignore those feelings of guilt and helplessness, and face the situation in a healthier way.

This is probably something you ignored until a minute ago, but it’s true. Age discrimination is incredibly common. Maybe we all need to be reminded that “senior talent” is important. After all, they’re the ones who guide and teach young people when they’re fresh in the world of work.

If we saw each person for what they are (an individual) and not a profile full of data, perhaps things would be a bit different. Companies, come to your senses. You’re letting talent go to waste. Let’s put an end to this eternal unemployment issue!

The Wisdom of the Elderly
Elderly people save their stories for those who really want to hear them. Let yourself discover how infinite the wisdom of the elderly is. Learn more here! Read more »
Link copied!
Interesting Articles
Coaching and Leadership
The Advantages of Autocratic Leadership

No doubt you've heard of histamine or antihistamines before. These two substances are directly related to allergies and allergy treatment.…