The Pond, an Ancient Zen Legend

This is an ancient Zen legend that takes place in an enchanted garden where every vice and virtue live in almost total harmony. Fury and sadness, however, tended to make things difficult. 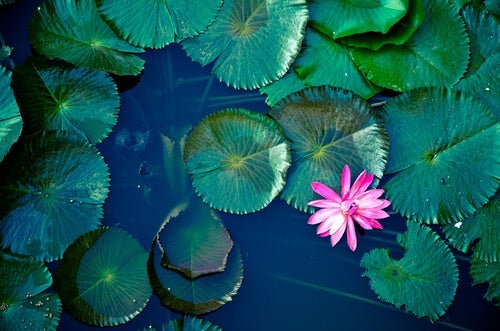 This ancient Zen legend is about an enchanted kingdom where all the vices and virtues lived in relative harmony. They all liked to play in a huge garden that was always full of light and mysterious smells. Sometimes, they talked for a long time. Although they didn’t agree on everything, they rarely fought.

In spite of the beauty and tranquility of the place, two of its residents were always hard to deal with. One was Fury and the other Sadness. They both had a lot of friends. Fury, for example, was always with Envy, Resentment, and Jealousy. Sadness, on the other hand, wasn’t as social but usually hung out with Laziness, Conformism, and Mistrust.

Fury and Sadness were both very sensitive. They had a hard time tolerating the sun and rain during the day or night. Also, they were extremely hard to talk to. As soon as they found something they didn’t like, they started to grow. Sometimes, they grew so much that they didn’t leave room for anyone else. That’s why everyone else walked on eggshells around them and tried to avoid talking to them.

“Sadness is but a wall between two gardens.”

The ancient Zen legend and a competition

Fury and Sadness tended to frequent the same places. They both liked swamps and forests full of weeds. One afternoon, coincidentally, they both decided to walk around a wonderful fish pond that was in the garden. They started to talk. Sadness lazily told Fury that he had heard rumors about a treasure buried near the pond. Illusion swore it was there somewhere and that it was priceless. Pessimism didn’t believe it was true, of course.

Fury, who always reacted without thinking, challenged Sadness. He said he had heard similar rumors, and proposed a competition to make things more interesting. They each had to choose a section to dig at random, and look for the treasure there. The one who found the treasure would get to keep it. Although Sadness thought he might lose, he accepted the challenge. He thought that if he found the treasure, he wouldn’t feel so sad.

They each chose a section and started digging. Fury dug energetically and, in less than three hours, finished her section. He was furious when he realized that the treasure was probably on the other side. This ancient Zen legend tells that Sadness took his time. He dug for a few minutes, and then took time to think and breathe. It took him a week to finish while Fury watched, about to explode. Neither of them found the treasure.

The lesson of the legend

This legend says that both Sadness and Fury realized they’d been deceived. They also realized that they were very dirty. Due to all the digging, they were covered in mud from head to toe. Since the crystalline pond was close by, they decided to rinse off there.

Anger made it to the edge of the pond and took off his clothes. He angrily threw himself into the pond and, after a few minutes, the water became cloudy. Sadness, as usual, thought about it for a while. Then, he got closer to the edge of the pond, thinking that he was going to see beautiful, clear water. But that isn’t what he found. He cried a little, as he realized he didn’t have any other choice but to clean himself in the now murky water. Finally, he took off his clothes and jumped in.

According to the story, Fury splashed around, getting water everywhere. Sadness, on the other hand, stayed in one spot, as he thought that he could get the mud off by staying still. The water became completely cloudy and muddy. The dark liquid got in Fury’s eyes, who angrily got out of the water to put his clothes back on. However, since he couldn’t see very well, he accidentally grabbed Sadness’s clothes and put them on.

When Sadness got out of the water, he found Fury’s clothes and put them on. After all, he didn’t really care about that anyway. From then on, Fury walked around with Sadness’s clothes and Sadness with Fury’s clothes. The storytellers of that kingdom say that neither of them ever felt like their clothes were too big or too small because Fury is just a disguise for Sadness, and Sadness a disguise for Fury.

The Ten Spiritual Realms of Zen Buddhism
There are ten spiritual realms of Buddhism. Four of them are considered to be higher and more evolved states, while the other six are underdeveloped. Read more »
Link copied!
Interesting Articles
Stories and Reflections
Knowing How to Wait Takes Courage