The Effect of Music Therapy on Your Body

Listening to music is a form of therapy that has numerous benefits for your health. In general, it's a channel for emotional expression, relaxation, and a great way to increase your well-being. 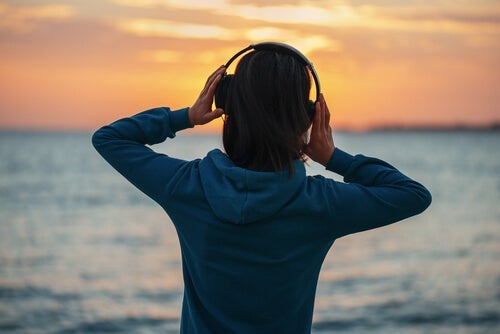 The effect of music therapy is closely linked to the effect that music has on people in general. Think about it. How many important moments in your life are associated with music? How many situations are transformed into something unique and special because of music? Music is a universal form of communication.

The positive effect of music in people’s lives is fairly obvious. Thus, it’s not a stretch to think about using it as a therapeutic tool. Music therapy is just what it sounds like: a type of therapy that uses music to treat patients. In this article, we’re going to delve a little deeper into this concept and describe music therapy’s most important techniques.

Music therapy is a method that uses music and sound to establish the communication and connection necessary to achieve therapeutic goals. The goal of music therapy, as with most therapies, is to improve the patient’s health and quality of life on the physical, emotional, and cognitive levels. People with brain injuries, terminal illnesses, dementia, mental health problems, and autism can especially benefit from the effect of music therapy.

In 1950, Paul Nordoff, a composer and pianist from the U.S. and Clive Robbins, a British special education teacher, started to collaborate on a therapy that used music as the cornerstone. Later, they created the Nordoff-Robbins Center for Music Therapy, dedicated to improving the quality of life for people who need neurological rehabilitation.

They discovered that when their patients had the opportunity to actively create music, they made better progress than anyone expected. As a result, they had empirical evidence for the idea that experimenting with music stimulates the brain on a level that no one knew about before. In other words, their work provided evidence that defended the positive effect of music therapy.

“Nordoff–Robbins music therapy is grounded in the belief that everyone can respond to music, no matter how ill or disabled. It holds that the unique qualities of music as therapy can enhance communication, support change, and enable people to live more resourcefully and creatively.”

What’s the effect of music therapy on the brain?

Music has certain components that have a positive effect on the brain. Music actually stimulates the production of serotonin, the “happiness hormone”. It also facilitates changes in your brain chemistry, generating a sense of well-being.

Scientist Robert Zatorre describes the neuronal mechanisms of musical perception. He says that the music you listened to in the past conditions your brain’s response. That’s because the brain has a database that contains stored information about all the melodies that it has heard before.

Consequently, Zatorre argues that the effect of music therapy on the brain is overwhelmingly positive. What we know for sure is that music can evoke past neural connections, transferring memories into your conscious awareness.

Music therapy also contributes to memory recovery because it stimulates certain cognitive areas, such as language and attention.

According to Spanish musician Javier Alcántara, musical abilities and musical memory are the last to go. That’s why one of the goals of music therapy is to enhance/preserve memory and cognitive abilities. This is especially relevant for people with dementia.

The Nordoff Robbins Musical Therapy method believes that music therapy helps people remember things and express emotions that they wouldn’t be able to do otherwise.

Playing an instrument lets the individual express through music something that they would have trouble talking or writing about. Giving patients the opportunity to make music also helps the therapist understand their patients’ emotional state through the sounds they make and the way they act with the instruments.

This is why experts consider music therapy such a powerful tool for emotional expression. It has a positive effect on self-esteem, motivation, and how patients deal with their emotions.

Music is an avenue to express how you feel inside.

According to a study by researcher John Nida, music can mitigate the effects of stress and improve breathing and relaxation. That’s because it uses pleasant and attractive sounds and stimuli.

These elements also apply to daily life and social relationships. Thus, practicing these things during music therapy will also help the patient out in the world. There’s no doubt that music has the potential to improve your relationship with your surroundings. It helps create and intensify emotional bonds with other people and helps patients develop social skills.

Where can you see the effect of music therapy?

Currently, music therapy is most commonly used for the following:

In conclusion, you can see the effect of music therapy reflected in patients’ quality of life because it provides an alternative avenue for emotional expression. Music therapy’s success has led to its increasing popularity across a variety of fields. There are more and more therapists specializing in music therapy and using its techniques with their patients.

“Music gives a soul to the universe, wings to the mind, flight to the imagination, and life to everything.”