The Pain of Unshed Tears

Unshed tears hurt because they accumulate inside us in the form of distress. That's when helplessness and discouragement can take hold of us. Why can't we cry sometimes? 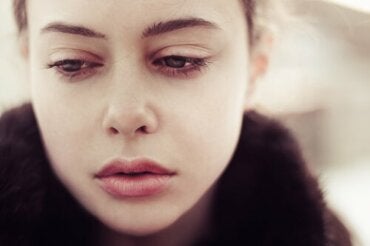 Sometimes, a sort of deep anguish invades you, knots form in your throat, and your mind seems to be blocked. You’re full of sadness, and the helplessness of what’s happened catches up with you. You can’t seem to do anything, no matter how hard you try. Even your tears seem to be locked in. At least you’d be able to find some relief if those tears started to fall. What’s going on? What’s keeping you from crying? In this article, we’ll look at the pain of those unshed tears.

Many people who’ve experienced negative situations that have impacted their lives seem to be unable to release their pain. What happened to them has shaken them so much that they seem to be blocked, locked in suffering that takes away any possibility of them expressing how they feel.

It really is a bitter feeling. They want to cry, but they can’t. They even wish they could express the things they’re feeling, but they can’t do that either. The discomfort becomes greater and greater, and it’s as if, little by little, the unshed tears were suffocating them from within. Let’s have a closer look at this.

Not being able to cry can be associated with several different causes: from illness to emotional blockages. Thus, first of all, it’s important to rule out any cause at a physiological level.

For example, Sjögren’s syndrome is an autoimmune disorder that destroys the glands that produce tears and saliva, but it can also damage other parts of the body. It can cause symptoms such as dry eyes and dry mouth. For this reason, it’s important to go see a doctor, rather than assuming that what’s happened is due to psychological problems, such as depression.

Psychological causes of your unshed tears

Once the physiological causes have been ruled out, it’s time to assess the person’s psychological condition to try to find out more about those unshed tears. Firstly, you need to realize that not all people manage problems in the same way.

Everyone has their own particular way of facing reality, their own reactions, and their own strategies. Some people will be able to release their emotions easily, others will need more time to process what happened, and still others who, for some reason, seem to be emotionally blocked due to shock.

When the problem has a psychological origin, then it’s usually related to poor emotional management. This may be something specific, but the danger here is that it can also lead to depression and other conditions. If a person finds it impossible to cry during the grieving process, and this prolongs over time, then the person could be suffering from pathological grief.

However, we need to take other factors into account. We need to consider what the act of crying means to that person. Many believe, often due to their upbringing, that crying is negative and a sign of weakness.

Because of this, many people tend to repress it out of fear of being considered fragile or vulnerable, and they become almost robotic as far as their emotions are concerned.

Also, they may be afraid to connect and be real with themselves. This isn’t at all conducive to health, and can sometimes facilitate the accumulation of anger, rage, and aggression, or even amortization.

The emotional release of tears

William Frey, a doctor at Saint Paul Ramsey Medical Center, says that tears are as necessary as smiles. While they don’t have the power to resolve what’s happened to us, they do soften tensions and relieve sadness. They also make it easier for people to get to know themselves better and to connect with others.

Tears are part of us. They’re a defense and relief mechanism – a way of releasing accumulated tension, regardless of the situation. That’s why it’s important to allow ourselves to cry. Lauren Bylsman, a researcher at the University of Pittsburgh, says that crying helps the body to return to its state of homeostasis. This means that the body can regain its balance, after having experienced often traumatic changes.

Crying releases adrenaline and noradrenaline, hormones that are secreted in great quantities in stressful situations that could be dangerous. This produces a feeling of calm and relief in the body, and the body is able to relax.

According to a study conducted by biochemist William H. Frey, when tears are shed due to a negative or dramatic situation, then this releases endorphins, prolactin, potassium, and magnesium chloride, as well as adrenocorticotropin and leucine-enkephalin. This brings us considerable physical and emotional comfort, and the emotional outburst brings us relief.

Suppressing tears or being unable to cry leads to an accumulation of distress. It’s like being adrift in an ocean of suffering, with no lifeline or land in sight. Nevertheless, some strategies can help you to release the accumulated tension and finally begin to release those unshed tears:

As you can see, crying is a liberating and healthy act. It can transform the tension you’ve experienced into an expression of your inner world. It helps you release the inner pressure which sometimes holds you captive, facilitating emotional discharge and relaxing you. This way, you’ll start to feel more secure and you’ll be able to see what’s happened from another perspective.

In addition to this, tears can also communicate; they’re a real call for empathy and support from others. They appear when your words can’t express what’s welling up inside you, and when you’re unable to describe how you feel because of its intensity.

Crying isn’t a sign of weakness but of courage. The courage to communicate the depth of your emotions, and to tell others how you’re feeling. As American writer Washington Irving said, “There’s a sacredness in tears. They aren’t a mark of weakness, but of power. They’re the messengers of overwhelming grief and of unspeakable love.”

“Tears are the blood of the soul.”

Emotional Crying: Medicine To “Drain” The Soul
There are those who cry silently, for a brief moment, and in discrete solitude. However, the only way to restart is through emotional crying. Read more »
Link copied! Next
Interesting Articles
Emotions
What You Can Do When Your Emotions Are Taking Over

Emotions
Why Parents Hold their Babies by Their Left Side

A simple, yet enigmatic, fact: many mothers notice that their babies calm down when they hold them by their left…

Emotions
The Story of the Origin of Emotions

There's no consensus on how this wonderful story of the origin of emotions came about. For some unknown reason, people…

Who hasn't experienced shame after expressing an opinion and guilt after something they did and pride after an achievement? Any…