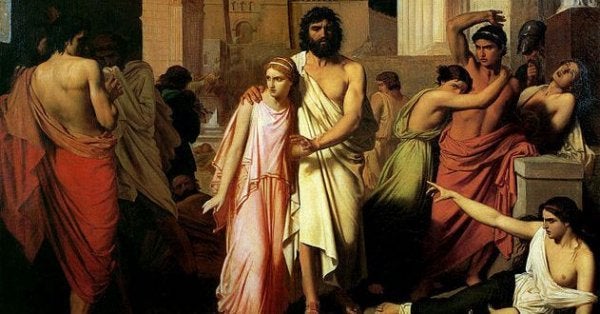 The Oedipus complex is considered the cornerstone of Freudian psychoanalysis. It’s one of the fundamental concepts of psychoanalytic theory. Not only does it explain the formation of personality structure, but it also aids in understanding clinical manifestations.

Regarding the theory, the Oedipus complex represents the central axis of drive theory and Freudian metapsychology. It explains psychic functioning and personality formation. At the time, it was a milestone and a revolution because this new approach was based on the principle of psychic causality. In other words, it used the unconscious mind to explain the formation of personality.

The Oedipus complex and its clinical manifestations are important due to their causality. Depending on its development and resolution, a determined personality structure will develop. In turn, it’ll give way to the generation of symptoms in different structural modalities (psychosis, neurosis, or perversion).

What is the Oedipus complex?

To begin, we must clarify that the technical term -complex- refers to a conflict in psychoanalysis. The meaning of this word is totally different from its use in psychology or in popular slang, where it refers to “being self-conscious” or “having a complex”.

Therefore, the Oedipus complex alludes to a conflict based on an organized set of romantic and hostile desires experienced by a child towards his parents. Freud defines it as the unconscious desire to maintain a sexual relationship (of incestuous nature) with the parent of the opposite sex (the mother) and to eliminate the parent of the same sex (parricide).

“For the first time, the child must exchange pleasure for social dignity.”
-Sigmund Freud-

Freud formally gives the status of a complex to the Oedipus complex in his work titled “Five lectures on Psychoanalysis” (1910). We say formally because he started using this term in 1897. This is when he made reference to Sophocles’ masterpiece called “Oedipus Rex.”

Freud uses the Greek tragedy of Oedipus Rex to illustrate the universality of a child’s ambivalence towards his parents, as well as the development of hetero and homosexual components. This is a subject will be taken back up during adolescence. During this period, the transformation of sexuality and detachment from parental authority take place.

What’s important about the Oedipus complex?

In his work titled “Three Essays on the Theory of Sexuality” (1905), Freud assures that incestuous fantasies of replacing the rival parent are recurrent in children. That means replacing the father for the boys and the mother for the girls. This fantasy makes children feel guilt and fear of punishment at the same time.

“Neurosis is the inability to tolerate ambiguity.”
-Sigmund Freud-

The defense mechanisms used by each person to solve the Oedipus complex will determine the structure of their personality. Therefore, they will also condition how these people face and account for both the external and internal worlds. Jacques Lacan, a French psychoanalyst very attached to Freudian theories, best explains the role played by foreclosure and denial as defense mechanisms.

That said, delving into the role played by the Oedipus complex regarding the feelings of ambivalence that may exist, there’s a function which stands out above all others. This complex allows the child to be introduced to norms -the law – and culture. Freud refers to this in his work “Totem and Taboo”  (1913), when he writes about the primitive horde.

The relationship between Totem and Taboo and the Oedipus complex

In Freud’s work “Totem and Taboo”, a new social order based on exogamy is established after the murder of the totem causes regret and feelings of guilt within the horde. Exogamy means, the prohibition – or taboo – of owning the women of the same clan. At the same time, they paved the way for totemism. This means the killing of the totem is a taboo (where the totem is a figure which symbolizes the father).

The prohibitions of totemism (which include incest and killing the father) represent the two central unconscious desires of the Oedipal conflict. Freud concludes in his work that the Oedipus complex is the central condition of totemism. Therefore, it’s both universal and fundamental in the culture of any human society.

Freud associates the Oedipus complex with the castration complex, which is the reaction to sexual intimidation or the curtailment of sexual practice during early childhood. The castration complex will be the consequence of the establishment of the norm, a prohibition introduced by the father figure.

The threat of castration (in males) or the idea of having been castrated (in females) will lead to the repression of the first sexual experience. Afterward, during adolescence, it will allow for a choice or an exogamic object.

This way, after the act of repression in the neurotic, (which represents the defense mechanism) a very important psychic instance, the Superego, establishes. This instance will produce a psychic structuring through the introduction of the social norm, a norm also attributed to the father figure. This introjection of the law will allow the child to start controlling his internal world, while also taking into account external desires and demands.

Functions of the Oedipus complex

The Oedipus complex is a fundamental pillar of the psychoanalytic theory. Freud also attributed different functions to it:

Thus, for Freud, the Oedipus complex takes place within a triangular relationship. This relationship is formed by the mother, the father, and the child. Also, the resolution of this “triangle” and the introduction to the norm will condition the personality of the child.

“Civilization began the first time an angry person cast a word instead of a rock.”
-Sigmund Freud-

The Electra Complex: What Is It and What Does It Do?
Many of us have heard of Sigmund Freud's theory of the Oedipus Complex, but you may not be as familiar with Carl Jung's Electra Complex. Read more »
Link copied!
Interesting Articles
Social Psychology
Community Psychology - Characteristics and Origin