The Neurological Effects of Coronavirus: the Latest Discoveries

Loss of smell and taste, neuralgia, dizziness, mental confusion, and even occasional cases of encephalopathy. Experts are studying the neurological effects of coronavirus. 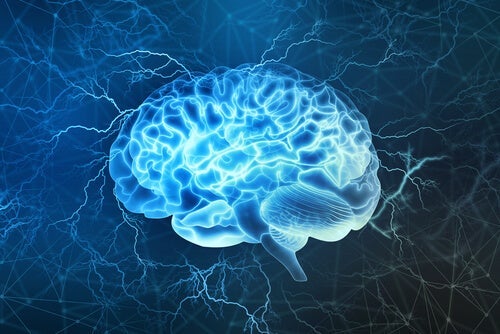 SARS-CoV2 is a challenging biological enigma that scientists are having to decipher little by little. This virus continues to pose more questions than answers. However, as each day goes by, we understand a little more about it, either under the lens of a microscope or by analyzing the symptoms it causes. The latest findings reveal that the coronavirus can also cause neurological effects.

A few months ago, Tsinghua University in Beijing stated that the cells confuse the viral RNA with the genetic material itself, causing us to develop viral proteins ourselves. Also, everyone knows the impact they have on our respiratory system, something that COVID-19 shares with MERS and SARS.

However, the virus that triggered the current pandemic has a higher infectious load. In fact, its viral impact is up to 1000 times greater than other viruses. In this regard, experts state that the entire viral load is found in the throat during the first days, thus favoring the spread of the disease. Approximately at day seven or eight, the lungs will start to have problems.

However, a few weeks ago, the scientific community revealed a new effect that could explain why these respiratory problems occur. The origin of COVID-19 could be, perhaps, in our central nervous system.

The neurological effects of coronavirus

We’ve all heard that the coronavirus can make us lose our sense of smell and taste. Experts such as Dr. Claire Hopkins of King’s College London described this effect.

This condition isn’t an effect of the respiratory system but, rather, of the central nervous system. Moreover, something that many doctors are discovering on a daily basis with affected patients is that they’re showing numerous neurological manifestations.

In some cases, doctors have even detected brain damage. In a study conducted by doctors Yan-Chao Li, Wan-Zhu Bai, and Tsutomu Hashikawa from Peking University, the tomography scans of patients show that the coronavirus can indeed also cause neurological effects.

36.4% of the patients have neurological manifestations

In the University of Siena in Italy, doctors have been analyzing this fact for weeks. Dr. Antonio Federico explained that 36.4 % of the patients showed neurological alterations. The Italian Society of Neurology is trying to further analyze these clinical realities.

They’ve discovered that the symptoms related to the central nervous system are:

Doctors have described very specific cases of patients who have suffered from encephalopathies, such as the case presented by Dr. Gassan Shajin and Dr. Daniel Noujam. Also, there’s another case of a 58-year-old patient who developed a rare neurological disease that altered her mental state.

Another case was described on March 21 by Dr. Asia Filatov of the Charles E. Schmidt College of Medicine in Florida. In this case, a patient with COVID-19 developed another encephalopathy.

This could be the cause of respiratory problems

While the 2002 SARS and MERS had a clear direct impact on the respiratory system, scientists are making somewhat different discoveries about COVID-19.

According to experts, SARS-Cov2 infects the centers of the brain stem that control breathing. Moreover, experts have also seen that this virus infects the entire brain.

Also, the virus affects the cardiorespiratory neurons of the brain to the point of inhibiting spontaneous breathing.

Understanding its mechanism of action is an advantage

We already know that the coronavirus can cause neurological effects. We know that acute pneumonia has been fatal in many patients. Now, we know its origin, mechanism of action, and consequences. All this data is very useful.

Knowing how this imperceptible enemy acts is an advantage. It’s true that we still lack the necessary tools to reduce its viral load in the body. However, as scientists decipher the riddles of its genetic code, we will be able to develop effective ways to fight it.

All we can do right now is continue the confinement in order to flatten the curve, hoping that scientists will manage to find a cure.

How Lockdown Affects the Brain
We each face confinement in different ways. However, our brain can suffer very specific problems. Discover how lockdown affects the brain. Read more »
Link copied!
Interesting Articles
Brain
The Prefrontal Cortex: One of the Most Interesting Parts of the Brain