The Neurobiology of Disappointment: The Longest-Lasting Pain

Disappointment can have a painful impact on your brain. This can be explained by the activity of some neurotransmitters, such as GABA, which change significantly when you experience this emotion. Science explains how these alterations occur. 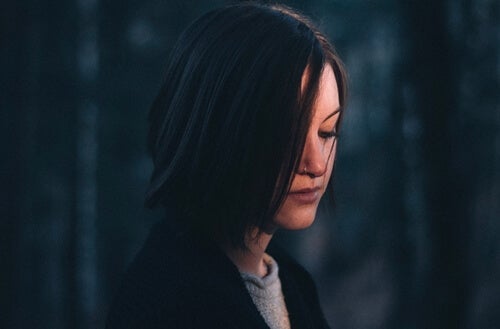 The neurobiology of disappointment shows once again that there are aspects in life that the brain experiences in a particularly painful way. That’s why, due to some unknown reason, a person might suffer for longer when they lose an opportunity or when they lose trust in someone.

Shakespeare used to say that expectations are the root of all heartache, and perhaps he’s right. But it’s also true that you might often need to hold on to certain things in order to find stability and not fall apart when life is uncertain. Therefore, it’s very common to assume that your loved ones won’t ever betray you in any way.

You might also keep some expectations about yourself; you might assume that you won’t fail in those things you usually do so well and think that everything you have today will still be there tomorrow. However, sometimes, everything takes a turn and your bubble bursts. When this happens, you lose some confidence, and your brain interprets it as a warning sign for survival.

When you lose an opportunity you were so excited about, your boss fires you overnight, or a loved one betrays you, you obviously experience a painful situation. It’s somehow a strike to everything that was a meaningful part of you. So, what happens in your brain when this occurs?

“Our experience is composed rather of illusions lost than of wisdom acquired.”

The neurobiology of disappointment

The neurobiology of disappointment arises due to the neuroscience field’s recent interest in it. For many years, psychologists, psychiatrists, and neurologists have wondered why disappointment is so painful. Of course, it’s clear that disappointment is also part of each individual’s personality as well.

Those who have gone through it several times often become distrustful. Disappointment takes away some momentum from the hopes someone may have and it makes a person more cautious with their expectations on people. Either way, something must happen at a brain level in order for its impact to be so evident. Let’s see what science has to say about it.

Neurotransmitters are chemical substances that transmit signals to neurons. Thanks to this neurochemistry, you’re able to feel, think, and behave in certain ways. In fact, it’s worth noting that very specific neurotransmitters completely control your moods, such as dopamine and serotonin.

An interesting study that Dr. Roberto Malinow conducted at the department of neurosciences in the UC San Diego School of Medicine showed that two specific neurotransmitters completely regulate disappointment. These are glutamate and GABA, which operate in the area of the brain called lateral habenula.

The lateral habenula and glutamate and GABA release

The lateral habenula is one of the oldest parts of the brain. That’s how we know, for instance, that it’s part of the emotional processes that facilitate decision-making. However, despite the fact that it mainly works in a positive way by boosting motivation, this area also has a “dark side” to it.

For it to function properly, there must be a balanced and correct release of glutamate and GABA. Thus, the greater the neurotransmitter’s contribution to the habenula, the stronger the feeling of disappointment. On the contrary, the lower the release of GABA and glutamate, the lower the impact of this emotion on the brain.

Depression in relation to the neurobiology of disappointment

Dr. Roberto Malinowski pointed out something important about this topic. There’s proof that the impact of long-lasting disappointment leads, in many cases, to depressive disorders. Meaning that, when the brain intensely releases GABA and glutamate, there’s a higher risk of suffering from this psychological disorder.

Also, that excitation in the habenula caused by the excessive release of said neurotransmitters makes the patient obsess over certain ideas, memories, or past painful experiences. It’s harder to move on, and that’s when emotional stagnation and suffering happens.

But the discovery of the relationship between glutamate-GABA and disappointment and depression opens the door to new treatments as well. Not so long ago, the common belief was that antidepressants and serotonin regulation helped balance the GABA-glutamate ratio. However, now it’s clear that although there’s an improvement, it’s still possible to experience several different side effects.

Therefore, the current challenge is to develop a treatment that acts specifically on some neurotransmitters, and not on others. That way, doctors could give proper answers to those patients who, due to several alterations at a neurochemical level, experience some situations more intensely. As you may have seen, the neurobiology of disappointment is a highly interesting field.

The Neurobiology of Human Attachment
Attachment is a defining characteristic of mammals. So, research about the neurobiology of human attachment is also based on research done on animals. Read more »
Link copied!
Interesting Articles
Behavioural Biology
Causes and Symptoms of Dysarthria