The Mind of a Baby - What's it Like Inside?

New research in recent decades is breaking down all sorts of myths we had about the mind of a baby. In today's article, we're going to tell you about the most outstanding findings, including some interesting facts about how it works. 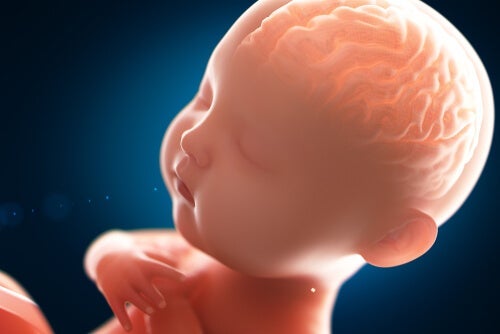 The mind has been described in many ways throughout history. Currently, we know more about it thanks to technological advances that have allowed new scientific research. On this note, do you ever wonder what the mind of a baby is like? Is it the same as the mind of an adult or an older child? Surprisingly, this is a rather fascinating subject that scientists recently began studying.

Over time and after many philosophical, psychological and biological theories, our knowledge and reflection are increasingly more accurate and profound. Thus, in this article, we’ll try to better understand how the mind of a baby works. Also, why and how it differs from the mind of an adult.

“The baby, assailed by eyes, ears, nose, skin, and entrails at once, feels it all as one great blooming, buzzing confusion.”

The mind of a baby according to neuroscience

Current neuroscience has means that allow us to highlight or rule out past hypotheses. We know babies are able to process information in a short time through techniques that measure their brain activity. Thus, they have the power to capture various sensations and give them a specific meaning.

This is how babies can detect unusual stimuli even if they don’t focus on something in particular. This is a wonderful and necessary faculty for learning. In addition, the absence of prejudice leads to a greater creative potential to attribute it to.

Actually, we know that a baby’s brain has many more neurons than an adult brain. A process called neuronal pruning occurs as we develop, eliminating connections and neurons that aren’t useful to us.

Also, after analyzing the connections of the regions of a baby’s cerebral cortex, scientists found that these have better connections than an adult brain — especially in regions dedicated to executive functions. This is rather fascinating as it could be precisely one of the phenomena responsible for humans being able to learn so much in the early stages of life. If this is true, then our internal brain wiring would be a facilitating element.

Similarly, neurotransmitters are also important in a baby’s brain, just as they are in the adult brain. In this regard, their peculiar release would make babies less selective by filtering stimuli.

Myths about the mind of a baby

David Chamberlain, a Californian psychologist, spent a lot of his life studying babies’ minds. In fact, his book, The Mind of Your Newborn Baby, emphasizes the most prominent myths associated with the baby’s mind. Here are a few:

Perinatal psychology showed us the importance of baby relationships for their future development. Meanwhile, behaviorism focuses on how habituation and sensitization work. Thus, thanks to these and other approaches, we now know that a baby has many functions that people believed to be non-existent in the past.

The development of a baby’s mind

Babies change as they grow. We appreciate some changes, while others go unnoticed because they’re either subtle or internal.

For example, a child younger than two years old learns to manipulate objects through their senses. In addition, they can start crawling, have more access to language, and begin to develop attachments. Thus, their mind isn’t going to be the same as a 3-year-old boy’s. But why? Well, it so happens that, a baby’s brain is ever-changing as they interact with the environment. Thus, they establish new connections and discard those that aren’t effective. They do so according to their stage of development.

Then, there are monthly differences at their brain level. Usually, this depends on every child’s biological factors and their degree of interaction with their environment. Thus, each milestone works towards a baby’s development. For example, according to Ana María Caballero, author of the book Teachers Learn How Kids Experience the Arboretum, crawling favors the integration of the corpus callosum, a structure that unites both hemispheres. As a consequence, they develop a crossed pattern, a vestibular and proprioceptive system, visual convergence and eye focus, the sense of touch, future lateralization, and the ability to write in the future.

In short, the mind of a baby is truly fascinating because it establishes connections after each learning experience. One needs the other to enhance optimal development and, given they lack prejudices, it still has the wonderfully creative capacity. There are still many questions to answer and many questions we haven’t even formulated yet.

What’s a Baby’s Smile Telling Us?
One of the most wonderful sights we can experience is a baby's smile. But what are they exactly trying to communicate? Read on and find out. Read more »
Link copied!
Interesting Articles
Brain
The Tip of The Tongue Phenomenon

Brain
The Mystery of Consciousness

What exactly is consciousness? Scientists and philosophers have tried to solve the mystery of consciousness for a long time. Consciousness is everything you experience. The warmth of hugs, the sweetness…