The Man with No Name: The Reinvention of a Genre

Cinema is an integral part of our lives, and it leaves a mark - an immortal and indelible legacy. Despite the passing of time, Sergio Leone's films continue to attract new fans. Clint Eastwood became a household name thanks to these films, embodying the unmistakable "man with no name". 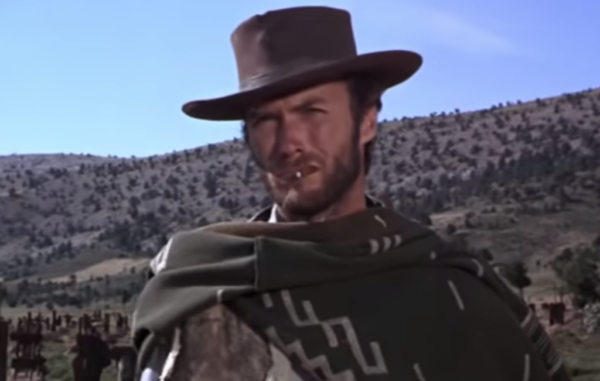 His ragged hat, immortal poncho, eternal cigar, and infamous penetrating look. These are some of the unmistakable characteristics of that mysterious character known as the Man with No Name. He was a man who forever changed the image of the Wild West hero, or antihero in this case. A character brought to life by the inimitable Clint Eastwood.

We got to know him as Joe in A Fistful of Dollars – in American slang this name can be used in the sense of “boy” or “young man”. In For a Few Dollars More, he’s known by the nickname “one-arm”. And, finally, in The Good, the Bad, and the Ugly, they simply call him “blondie”. His name, like his past, is an absolute mystery.

We associate his image with a genre that didn’t last very long but really left its mark in the history of cinema. We’re talking here about Spaghetti Westerns and one of the most important revolutions in the genre: the birth of the Man with No Name.

The American Western presents us with heroes whose values contrasted with the territories they moved through: territories plagued by Native Americans, bandits, and lawless cities.

In Europe, the genre was exciting. It was such an “old” continent that there was nothing left to discover, to come across distant and unexplored territories was fascinating.

An article in the magazine Área Abierta of the Complutense University of Madrid addressed the mythical idea of stereotypes and how the genre captivated Europe. Following the medieval style of films, Westerns captured the archetypical hero by drawing a firm line between good and bad.

In Europe, people no longer believed in fairies or mystical beings. However, they could believe in distant cultures, in those wild “redskin” men. European filmmakers decided to adopt the most typically-American genre that existed. The Germans were the first to try it and, little by little, the wave of the European Westerns swept the rest of the continent.

Between the 60s and 70s, an infinite number of productions began to film. Different European countries participated, among them Spain and Italy. Spain, due to its special landscapes, was the ideal place to recreate the arid North American scenery.

These productions didn’t usually have a large budget and critics mostly rejected them. Because of that, they began to call them Spaghetti Westerns, in a clearly derogatory way. However, one man managed to reinvent the genre: Sergio Leone.

His influence is fundamental and he inspired filmmakers such as Quentin Tarantino, Martin Scorsese, and even George Lucas. But Leone’s work wasn’t always recognized, and, especially in the United States, the vindication of his cinematic work would come later on.

Leone reinvented the genre and gave Clint Eastwood, who was almost unknown at the time, the opportunity to embody one of the most emblematic characters in cinema: the Man with No Name.

He broke the archetype of the American Western hero to give us a mysterious character of dubious morality, who not only shot Native Americans but also anyone who got in his way.

The Man with No Name: breaking the dichotomy between good and evil

In the medieval tradition, they presented the hero using their origins and extolled their virtues. This imprint has survived in our culture, and it’s something we usually see in comic book superheroes.

We get to know everything about the hero and, of course, they embody a morality rooted in the society they live in. They come across as honorable and noble, and sometimes even practically perfect.

The idea of the hero is deeply linked to the times they live in. Thus, in the Western, we see pride in its history and the conquest of the West, and also the values of civilization. However, this isn’t the case in Leone’s Spaghetti Westerns.

In the films that make up the famous Dollar Trilogy, Clint Eastwood brought to life the Man with No Name. He was a character who blurred values and transformed the genre.

The Man with No Name could be cataloged more as an antihero than a hero. We know nothing about his past, he lives for money, and is absolutely cold. His appearance and his clothes invited us to think that he had lived in many different cultures, and yet his origin was uncertain.

Silence as a central part

Silence is a central part of Leone’s movies, and become a characteristic sign of the main character. The characters aren’t at flat. We actually get to know quite a lot about them. A good example would be Tuco in The Good, the Bad, and the Ugly or the dark plot between Indio and Colonel Mortimer in A Few Dollars More.

The Man with No Name contrasts with the rest of the characters whose interests, motivations, and past we know. Is he good or bad? Is he a hero or a villain?

The dichotomy is broken, merged in the Man with No Name, and we see a character who seems to hover around the middle of that fine line. It seems that his only motivation is money and he doesn’t hesitate to use violence in any situation. However, neither can we say that he’s totally bad.

His dirty look, scowl, and cold appearance serve to create that sense of him being a disturbing and totally unpredictable man. This is an archetype that’s repeated throughout the trilogy, and that can be modified, reused, and transferred to other scenarios.

This is what we saw in the film Pale Rider, directed by, and starring, Eastwood. In this movie, we also see an outlaw who moves between good and evil, known simply as “the Preacher”.

Sergio Leone didn’t want to portray noble and kind characters; violence and despair are the prevailing themes in his movies. In its inhospitable places, survival and personal interests rule the day. The Man with No Name doesn’t defend others, shows indifference to injustice, and won’t save anyone if he can’t benefit from it.

Cinema as part of our culture

This coldness we’re talking about is framed by a violent, hostile, and, of course, very unhappy world. To achieve that atmosphere, Leone gave us dirty characters, dusty and worn-out clothes, and disturbing and wrinkled faces.

This way, he managed to bring a greater realism that contrasts greatly with the unpolluted image of the characters of the typical American Western.

The face of the Man with No Name is perfectly recognizable. However, Leone took it upon himself to painstakingly portray all of his characters, even those who only appear for a few minutes on camera.

In fact, he was quite criticized for showing as much ugliness and misery as he did. A misery that you can sense in the atmosphere, and in the faces of the characters, worn by time and waiting for death.

Good and evil are relative

Close-ups of hands, feet, faces, and looks that are almost eternal. Infinite silences and unmistakable music. These are some of the characteristics that sum up Leone’s version of cinema. Cinema in which good and evil are relative, and a style which many people have since imitated.

This genre brought countless people to movie theaters and its success led to an over-exploitation that would make it fall under its own weight.

Part of the magic of these films lies in their soundtracks, composed by Ennio Morricone, composer of many of the most unforgettable soundtracks in cinema. At 90 years old, he’s still active, although this year will be his last outing.

Leone and Morricone formed an unmistakable pairing. They insisted that the music should be written first before the scene was shot. This way, they achieved an exceptional symbiosis that goes beyond the screen.

Stanley Kubrick himself admired Leone’s movie Once Upon a Time in the West and applied the same techniques in his film Barry Lyndon.

The imprint remains indelible to such an extent that, last year, the documentary Sad Hill Unearthed (which was nominated for a Goya) was presented by the association of the same name, which is in charge of restoring the mythical The Good, the Bad, and the Ugly cemetery in the province of Burgos, Spain.

This shows that cinema is art, culture, and, of course, heritage. That’s precisely why we must make sure it doesn’t fall into oblivion.