Funny Games is a Michael Haneke film that confronts the viewer with a new kind of violence. It's a psychological thriller that tells the story of an assault a married couple and their son endured during their stay at an idyllic vacation home. 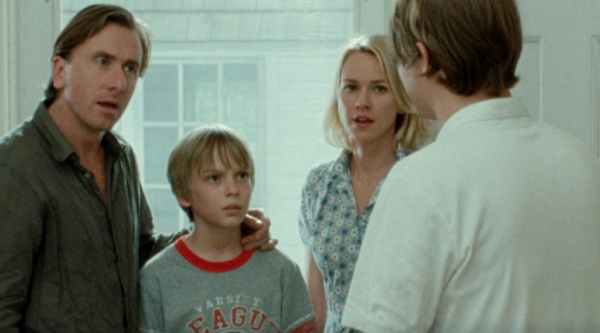 Funny Games, an American film by Michael Haneke, is a shot for shot remake of the 1997 Austrian version of the same title by the same director. The film is about the acts of violence perpetrated by two young men on a family right after they arrive at their lake house.

Although this could be just another a violent thriller, the plot isn’t what makes Funny Games special. In fact, it’s a lesson for the viewers. Also, an attempt to criticize the violent and insipid entertainment of many productions.

Firstly, this film intends to criticize vulgar and violent entertainment and it’s a kind of treatment for an audience obsessed with the casual consumption of harsh images.

Funny Games (both in its Austrian and American versions) aims to explain to what extent viewers are accomplices of the violence they witness. Either in their own environment or just as a cinephile.

The film begins as Ann and George (Naomi Watts and Tim Roth) drive across the country to their summer home with their young son, Georgie (Devon Gearhart). They listen to an opera CD during their journey in their Land Rover. Then, they tow their lovely wooden sailboat upon arrival.

As they settle into their vacation home, two well-spoken but rather odd young men appear on their doorstep. Their impeccable manners and apparent membership in the local rich white club gets them past the door and into the couple’s home. However, this marks the beginning of a nightmare.

The family soon realizes that these two young well-spoken men are bad news. Over the course of the night, they terrorize the family with various acts that involve manners lessons, a golf club, a knife, and a gun.

They constantly change the way they address each other. Sometimes, they’re Paul and Peter; others, they’re Tom and Jerry; and others, they’re even Beavis and Butt-Head. Michael Pitt and Brady Corbet play the roles.

Who are these sociopaths?

Peter and Paul operate without a motive. When George, the father, asks them why they’re being so cruel, one of the men responds with answers that parody the kind of easy story a viewer might expect.

They make allusions to their unhappy childhood, sexual instability, class resentment, and rudeness. Everything is typical, expected, and doesn’t offer any explanations. Haneke merely toys with simple arguments similar to those used by the mass media to explain the psychology of a victimizer.

Peter and Paul wear immaculate white gloves as they perform their terrible deeds. There are times when Paul addresses the audience directly and mocks it for rooting for Anne and George. Thus, the film makes vague allusions to the complicity of the viewer in the violent plot that’s taking place.

There are explicit winks from the actors as they manipulate the victims in a gruesome on-screen game. There’s the recreation of a common scene that takes place in the kitchen, imitating what many people do when they watch violence on a screen. It’s no big deal.

“Why don’t you kill us and get it over with?” expresses the battered character of George at a moment in the film. The psychopath’s response is “You shouldn’t forget the importance of entertainment”. Meanwhile, the audience witnesses a horrible spectacle.

The intention behind Funny Games

Michael Haneke is an Austrian film director known for his unconventional stories. Their entertainment value is about reflecting on his sequences.

Haneke’s violence is neither funny, elegant, sexy, nor even particularly dramatic. It’s simply and relentlessly disgusting. There isn’t even an actual plot development to deflect the agony.

The goal of Funny Games is to confront the viewer with their hypocritical taste for modern Hollywood violence in its various genres. The violence on the screen is something distant; alien to their daily lives.

The film shows that social status won’t save you from a dangerous situation. This is because most people aren’t prepared to react to what they’re otherwise tremendously vulnerable to, other humans. Although you don’t know it yet, this film has nothing to do with Hollywood’s perfect stereotypes.

Haneke wants to expose violence in this film and anticipate the conclusions of your reflections. Also, he wants you to realize that all of your deductions are just one more product of “arduous” years of watching violent films.

This is why the movie fools you, especially through the clues you may consider relevant so the family can “break free”. These clues are taken straight from other violent movies. However, they have little relevance in this film.

The end of myths

The victimizer’s motives aren’t logical or expected. In addition, the gender roles reverse, the escape from the scene isn’t heroic, and the demise of the characters isn’t charged with mystery. The escape scene, which is often part of the development of a plot, happens right at the beginning.

Finally, this is a kind of dry, unadorned violence, devoid of unnecessary screen recreation. Thus, it’s the kind of violence your psyche recreates. Mainly because it challenges it based on what the media taught you.

Don’t miss Funny Games if you want a challenge to your cinephile patterns. But you should avoid it if you just want to watch another violent movie and maintain your role as a mere voyeur.

The Best 21st-Century Psychological Thrillers
This is a small curated selection of psychological thrillers, that focuses on the best films that have premiered recently. Read more »
Link copied!
Interesting Articles
Cinema, Television, and Psychology
Gru: The Redemption of a Villain

Cinema, Television, and Psychology
11 Inspiring Movies That Will Make You Want to Be a Better Person

Some inspiring movies are testaments to the wonders of the human spirit. All of them involve surprising responses to extreme circumstances.…