The Main Lesson from the Orange Metaphor

The orange metaphor states that the worst and best moments usually bring out what you have inside, be it anger, fear, or love. What would come out of you if you were squeezed hard, as if you were an orange someone's trying to juice? 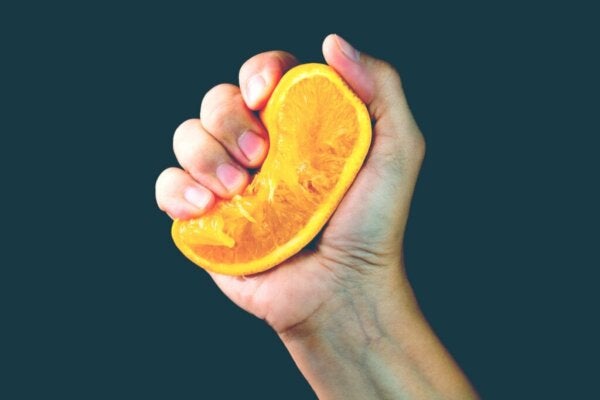 Let’s say someone’s annoying you, teasing you, and, metaphorically, trying to squeeze the life out of you. What would come out of you if they succeeded? Would it be anger, joy, or fury? The orange metaphor, put forward by psychologist, teacher, and writer Wayne Dyer, is a tool to understand why it’s so important to know what you’re made of.

Wayne Dyer is well-known and gained worldwide success after his book Your Erroneous Zones was published. The orange metaphor came up in one of his conferences in Toronto, Canada. An interesting thing about it is that he talked about it the day before his death.

His lecture surprised everyone. Wayne used an orange as a prop. Then, he began a dialogue with a bright boy of about 12 who was sitting in the front row.

“How people treat you is their karma; how you react is yours.”

The dialogue of the orange metaphor

Wayne said to the boy, “If I were to squeeze this orange as hard as I could, what would come out?”

The boy looked at Dyer like he was a little crazy and said, “Juice, of course.”

“Do you think apple juice could come out of it?”

“What about grapefruit juice?”

“What would come out of it?”

“Why? Why does orange juice come out when you squeeze an orange?”

What comes out when life squeezes you?

Dyer nodded and said, “Let’s assume that this orange isn’t an orange, but it’s you. Someone starts squeezing you, pressuring you, saying things you don’t like, and offending you. Due to that, anger, hatred, bitterness, and fear come out of you. Why? The answer, as the tween said, is because that’s what’s inside.”

“This is one of the greatest life lessons. If anger, pain, and fear come out of you when someone offends you, it’s because that’s what’s inside you. It doesn’t matter who does the squeezing—your mother, your brother, your children, your boss, or the government. If someone says something about you that you don’t like, what comes out of you is what’s inside. And what’s inside is up to you, it’s your choice.”

“When someone pressures you and out of you comes anything other than love, it’s because that’s what you’ve allowed to be inside. Once you eliminate all those negative aspects you don’t want in your life and replace them with love, you’ll find yourself living a highly functional life.”

“Thanks, my young friend, and here’s an orange for you!”

The orange metaphor is about resilience

Let’s continue the orange metaphor with another lesson. Surely you’ve heard the phrase “When life gives you lemons, make lemonade”. Have you stopped to think about what it actually means? This phrase, far from being related to conformism, is one of the simplest ways to define resilience.

Resilience stems from the Latin words resilio and resilire, which mean “to bounce back”. When applied to psychology, it refers to the human ability to overcome adversity. Thus, resilient people manage to make lemonade (make the most) out of the lemons (losses and disappointments) they experience in their lives.

Some people believe that resilience is something one’s born with, a genetic trait. However, subsequent research revealed that one can adopt this ability and refine it.

For example, by assuming that change is part of life, trusting yourself, building interpersonal relationships, focusing on the positive, taking challenges as opportunities, and being flexible and realistic in one’s goals.

In conclusion, it’s important to cultivate your inner world. If you fill it with unfertile soil, you’ll only get weeds. But if you use fertile soil and water it frequently, you’ll sow your best life.

The Shift by Wayne Dyer
"The Shift" is a movie directed by Michael A. Goorjian. The main protagonist is Wayne Dyer, author of the famous self-help book "Your Erroneous Zones". Read more »
Link copied!
Interesting Articles
Stories and Reflections
Franco Basaglia: A Groundbreaking Psychiatrist