The Legend of the Astur Wolf and Balance

The story of the Astur wolf is about balance and has its roots in an ancient Inuit legend. These people have always had to face hostile and threatening geographical conditions. 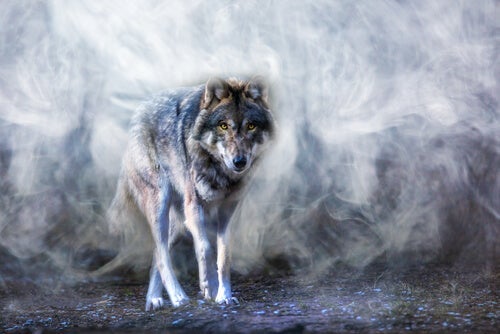 The Astur wolf is an Inuit legend, of the Inuit who live in northern Canada and Greenland. As you may already know, the Arctic region is a rather inhospitable territory. Those who live there bravely challenge nature in order to survive. Thus, this legend is a story about balance. The kind that must exist between humans and the environment in order to survive on the planet.

This story about balance tells that Kaila was the Inuit god of heaven. No one had more power than him. The heavens ruled the waters, the fire, and the Earth. Therefore, Kaila’s kingdom was truly sovereign. This god created a man and a woman at the same time so they could populate the Earth. In principle, both were completely alone, but they were also fully free.

The man and the woman noticed how everything was uninhabited and were puzzled by this realization. Thus, Kaila entrusted the woman with the task of populating the Earth and being the guardian of life. Immediately, he told her to open a hole in the ice. When she did, all kinds of animals began to come out and populate the Earth, along with human beings. The last animal to come out of the hole was a caribou.

–The Origin of Light, an Inuit legend-

The Astur wolf and balance

The legend of the Astur wolf is about balance. It tells that the man and the woman were happy to see the new beings that would share the Earth with them. Then, the god Kaila said something important to the woman. He told her the caribou, the last of the animals to come out, was an important gift from the gods. In addition, he said this animal would provide food for them in the form of their meat and shelter with their fur. “This animal will feed you and your family,” he said.

Since then, the caribou have become the most precious asset for the Inuit. This is because their meat has nurtured them like no other. Similarly, their skin has allowed them to make clothes and tents to protect themselves from the extreme temperature. Also, there were many of these animals around. Thus, they learned to hunt them and their life became much more comfortable with it.

The caribou multiplied endlessly when the woman asked them to. Kaila had granted him that power initially. When the man and the woman had children, they taught them to hunt these animals. The boys always wanted to keep the biggest and fattest specimens. That way, there would be more food and more shelter for everyone. Thus, theirs was a rather harmonious world.

The importance of balance

According to this story about balance, humans hunted so many large and strong caribou that, suddenly, only the worst specimens remained. Only the smallest and weakest survived the hunt, and the man and the woman began to worry.

Soon, they had no other choice but to consume the meat and skin of scrawny specimens. Unfortunately for them, they didn’t taste as good. Also, their skin was barely enough for a garment.

This is how a time of famine ensued. None of the other animals could satisfy the needs of human beings. The children began to lose weight, experiencing something they didn’t know until then: hunger.

This story about balance tells that, in this situation, the woman raised her eyes to heaven and asked Kaila for help. The god was somewhat upset. “I gave you the best gift,” he said. “But you wasted it,” he added. However, he promised to help her.

According to the story, Kaila decided that it would be worth talking to Amarok, owner and lord of the wolves, who were wonderful creatures. Kaila asked him to deliver a group of wolves to humans. Until then, these animals only lived in the kingdom of the gods. However, Amarok understood the situation and gifted a pack of wolves to humans.

They reached the frozen plains and sneaked up to the caribou, who grazed casually. However, as the wolves got closer, the caribou became aware of their presence. The caribou then decided to protect the weakest specimens. The larger ones formed a circle around them, to prevent the wolves from attacking them.

Despite this, the wolves pounced on them and broke the barrier. Thus, the best specimens remained alive and reproduced. Since then, the spirit of the wolf rules in the great kingdom of the north and get to prey on the smallest moose. Thus, Inuit leave wolves alone when they need to eat. They know that everything has a balance and that the Astur wolf is their guardian.