An Eskimo Myth - Sedna, Goddess of the Sea

Sedna's story is an Eskimo myth that explains the fury of the sea. When Eskimo fishermen have a good fishing bounty, they usually take some of the water that comes with the fish and throw it back into the ocean. If you ask them why they do it, they say it's an offering to Sedna, the goddess of the sea. 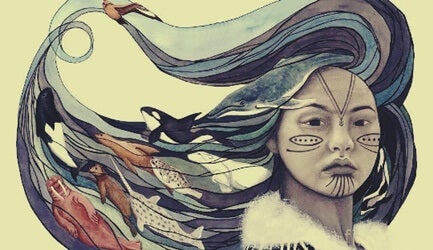 Although there are several versions of this Eskimo myth, this article talks about the most complete one. The legend says that there was a man who lived in the North Pole in ancient times with Sedna, his daughter. She was a very beautiful woman who only wanted to find a man to marry and be happy. However, there weren’t too many men there.

This Eskimo myth says that a very tall and muscular man appeared one day in that remote area. He wore fine skins and beautiful jewels. When Sedna saw him, she couldn’t believe her eyes. Thus, she quickly started combing her long hair to look beautiful for the stranger.

Sedna’s father didn’t really want to separate from his daughter. However, food was scarce. Thus, he decided it would be better to see her leave with a husband instead of allowing her to stay and go hungry.

The strange man wore a long robe so nobody could see his face. Still, Sedna’s father went to meet him and asked if he was looking for a wife. The man nodded affirmatively. Then, the old man told him that he had a beautiful daughter of marriageable age and that, if he wanted to, he could have her as a wife.

The man accepted. Thus, Sedna’s father informed her. She was somewhat surprised that her father had made such a proposal. Shouldn’t they meet first to find out if the stranger would be a good match for her? Despite this, she obeyed her father and got in her new husband’s boat. Then, the two made their way to her new home.

The Eskimo myth says that Sedna was horrified when she arrived at her new home. This is because it was full of animal skins on a cliff. Next to it, was a cluster of bird feathers. All of it was located on the edge of an abyss. Also, the place was cold, dirty, and neglected.

The worst part was when her husband took off his robe. He had no face, and his head seemed like a raven’s. Sedna understood that it was the evil sorcerer she’d heard about. He often traveled the roads alone looking for a wife but no woman had agreed to marry him because he had a reputation for being perverse.

The site was remote and far away from everything she knew. In the mornings, the sorcerer became a crow, went fishing, and came back in the afternoon with food for him and Sedna. Thus, she had to eat raw fish, just like him. Sedna cried and lamented daily. She cried so loudly that, even though she was very far away, her father heard her. Thus, he regretted his decision and went looking for her.

The origin of the Eskimo myth

Sedna’s father found her and rescued her. He climbed into his boat and started going back. However, a black shadow began to fly over them. The sorcerer in his raven form flew above them and quickly flapped its wings to stir up the sea. Suddenly, a great storm formed and the boat began to capsize. The father, fearful of what the sorcerer could do, threw Sedna overboard.

The sea was very cold but Sedna didn’t let go of the ship. However, her father just wanted to get rid of her. So, he took an ax and cut off her fingers. The members fell into the sea and became seals and fish. And, in spite of her injuries, Sedna tried once again to hold on to the boat with the rest of her hand. But her father cut her hands and they fell into the sea and became whales. Finally, Sedna sank.

This Eskimo myth says that Sedna didn’t die. On the contrary, she became a goddess. The legend says that, when her hair tangles, it forms large storms in the Arctic that affect all fishermen. Thus, to keep her calm, shamans must dive and comb it for her. They must also remind everyone to always respect women and the sea.