The Legend of Odysseus, a Resourceful Hero

The legend of Odysseus is one of the most meaningful and interesting in Greek mythology. This character is well-known for his wit, cleverness, and love for his homeland. He represents the exiled longing to go back home. 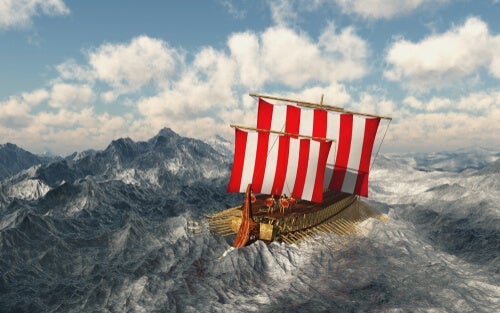 The legend of Odysseus is about the most human of all Greek heroes. Popular for his wit, he’s the protagonist of Homer’s famous book the Odyssey. In it, he goes through countless adventures and is always admired for his cunningness. He was born right after his mother was caught on the road on a rainy day. The word “Odysseus” means “Zeus rained down the road”.

He was born in Ithaca and became a king there. Some say that he was a disciple of Chiron, a centaur. From a very young age, he began to experience a series of adventures. However, the legend of Odysseus becomes important in the wake of the Trojan War, in which he was the protagonist. By the time that war began, he was already married to Penelope and had a son named Telemachus.

He pretended to be crazy in order to avoid going to war but he was discovered and was forced to participate. The legend of Odysseus says that he first accompanied the instigator of the war, named Menelaus, with the purpose of achieving a peaceful settlement. But because he didn’t succeed, he actively participated in the preparations for the battle.

Odysseus lived many adventures during the war and was always noted for his ability to cope with any situation. It was he who invented the ruse of the famous “Trojan horse”, which led his army to victory. However, the legend of Odysseus becomes much more interesting during his return to Ithaca, his homeland, after defeating Troy.

“No man or woman born, cowardly or brave, can shun his destiny.”

The return to Ithaca in the legend of Odysseus

One of the highlights of the legend of Odysseus is the many difficulties he encounters when returning to his homeland. He spent ten years in the war and it took him another ten years to return to Ithaca.

Many consider Odysseus the paragon of exile because his story captures the experience of being away from his birthplace and loved ones, all coupled with the difficulty of returning.

Shortly after undertaking the return trip, Odysseus had a confrontation on the island of the Cicones, from which he didn’t come out in very good shape. The wind began to blow strongly and diverted his ship from its route to Ithaca, so it reached the island of the lotus-eaters, named this way because their main diet consisted of lotus flowers.

That type of food led them to forget the past so they could always live happily and peacefully. Odysseus’s men ate it and forgot everything. Thus, he had to take them forcibly to the ship until the effect wore out. Then, they arrived at the island of the Cyclops or one-eyed beings. There he had to face a giant who was the son of Poseidon. He defeated him by blinding and deceiving him, so the monster cried out for revenge.

According to the legend of Odysseus, he continued to sail with his men. Then, they reached the island of the king of the winds, Aeolus. This king trapped all the winds in a wineskin and gave it to the hero so that he could return to Ithaca. They were already close to the homeland when the sailors opened the skin, thinking it contained a treasure. Thus, a great storm that took them away from their final destination started.

Later, much of the Odysseus crew perished on an island of giant cannibals. They then found Aeaea island, where they mourned their misadventures. There lived the beautiful sorceress Circe who transformed some of the crew into pigs. Odysseus, with the help of Hermes, rescued them and gained the respect of the witch, who housed them all for a year and instructed them to begin their journey once again.

Following Circe’s advice, Odysseus and his men resisted mermaids, erratic rocks, and some monsters called Scylla and Charybdis. His men were punished for eating the cattle of Helios and Ulysses was left all alone, without a boat. Thus, he arrived at the island where the beautiful Calypso resided.

The return to Ithaca

Calypso took care of Odysseus. She comforted and cared for him until he recovered. The island of this goddess was a paradise. However, the hero only dreamed of going home and reuniting with his wife and son. However, due to Poseidon’s revenge for what he had done to his son, Odysseus had to spend eight years on that island.

The goddess Athena, who held Odysseus in high regard, spoke to the other gods so that Calypso would let him go. He cried every afternoon, longing to go home. And even though Calypso didn’t want to, the gods threatened to punish her so she had to release her guest. However, Poseidon continued to punish the hero with hurricanes and storms but Athena helped him once more time and, thus, he reached the island of the Phaeacians.

The king of the Phaeacians, thanks to the intervention of the princess, finally arranged everything for Odysseus to return home. He gave him a ship and crew to take him to Ithaca. Finally, with the help of his son Telemachus, the hero met again with his beloved Penelope, who waited for him for 20 years and never stopped loving him.

Homer’s Sayings: Seven Gems from the Genius of Ancient Poetry
In Homer's sayings we can see a poet who was always looking to capture the deep motivations of heroic acts and to highlight the great collective values. Read more »