Inventor, architect, sculptor. Daedalus is most famous for building the Minotaur's labyrinth. Read all about him here! 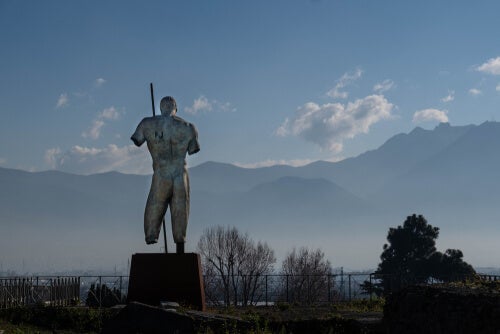 Daedalus was a mythical Greek inventor, architect, and sculptor. Greek mythology tells the story of how he built, among other things, the infamous labyrinth for King Minos of Crete. Daedalus’ name means “skillfully forged”.

Daedalus is a mythical character, but his name served as a front for a huge number of characters. In Daedalus, a variety of Greek authors personified art, sculpture, and architecture developments. This was especially true for the Athenians and Cretans.

They say that he lived during the early Heroic Age. In other words, the era of Minos and Theseus. Despite this claim, Homer only mentioned him once. And experts consider that passage to be quite controversial.

Where Did Daedalus Come From?

Ancient writers usually identify Daedalus as an Athenian descendant from the royal line of the Erechtheidae. Others refer to him as Cretan due to the lengthy period he spent living in Crete.

He worked as a sculptor and contributed a lot to art. He had two sons: Icarus and Iapyx. His nephew, Talos (or Perdix) is also an important figure in his story.

Daedalus was so proud of his accomplishments that he couldn’t stand the idea of having a rival. The architect’s sister gave her son over to her brother so that he could teach the boy the mechanical arts.

The name of this young man was Perdix, although some sources call him Talos or Calos. Perdix proved to be skilled in the ways of art and demonstrated great ingenuity.

According to Greek Mythology, Perdix picked up the spine of a fish while walking by the edge of the sea. Inspired by the shape of the spine, he took a piece of iron and forged it into an imitation of this object. This was the origin of the saw. In another story, Perdix placed two pieces of iron together. He connected them at one end with a rivet and sharpened the other end. This was the first compass.

Daedalus felt so envious of his nephew’s accomplishments that he pushed Perdix from high above so that he would fall from the Acropolis. The goddess Athena turned Perdix into a partridge, which allowed him to land safely. At the same time, she left a partridge-shaped scar on Daedalus’ right shoulder. He was convicted of the crime and he left Athens after staying in hiding for some time.

Crete, a Labyrinth, and a Wooden Cow

Upon his arrival in Crete, the court of King Minos and his wife, Pasiphae, took the inventor in. Unfortunately, he soon saw himself involved in another dangerous situation.

The issue was that Minos had decided to keep a magnificent white bull that Poseidon had gifted him. He did this instead of offering it as a sacrifice to the sea god. In his rage, Poseidon induced sexual desire for the bull in Pasiphae.

Pasiphae asked the inventor to create a wooden cow in which she could hide and mate with the bull. After she had done so, she became pregnant and gave birth to the Minotaur. This was a creature with the body of a human and the head of a bull.

Minos also made use of his services. He had him construct a labyrinth in order to imprison the Minotaur there so it couldn’t escape. This was the famous labyrinth of Greek mythology.

In fulfilling King Minos’ task to construct a prison for the Minotaur, Daedalus built one of the greatest architectural works of all time. The labyrinth had unending corridors and complicated twists and turns. These were meant to confuse anyone who entered so that escape would be practically impossible.

Every seven years, the Athenians were to send seven young men and seven damsels as sacrifices to the Minotaur. This sacrifice was meant to maintain peace between the two parties. This was necessary because one of Minos’ sons, Androgeus, had been unjustly murdered.

Theseus arrived in the second batch of Athenians as a volunteer. When he did, he immediately fell in love with Ariadne, daughter of King Minos. The princess didn’t want to see her newfound love interest die and, as such, asked the sculptor for help.

Daedalus gave Theseus a ball of string. He tied one end of the linen string to the entrance of the labyrinth and would be able to use it to find his way back. Through this, the hero was able to escape once he had killed the beast.

The Flight of Daedalus and Icarus

King Minos was furious when he learned of the treasonous act of having constructed the wooden cow. As a punishment, he jailed Daedalus and his son, Icarus, in the intricate labyrinth.

Daedalus knew a way out of the labyrinth. However, he wouldn’t be able to escape the island because all of the sea routes were constantly being monitored. That’s why he had to use his ingenuity to engineer a different solution and escape. He built two pairs of wings made of wooden sticks. These would support real feathers glued together with wax.

The inventor gave Icarus specific instructions on how to fly. He told Icarus that he shouldn’t fly too low since the water could get into the feathers and weigh them down. At the same time, he couldn’t fly too high because the sun could melt the wax.

They managed to escape and flew toward Sicily. But Icarus soon forgot his father’s instructions and kept flying higher and higher. The sun melted the wax, destroying his wings and causing him to fall into the sea and drown.

Icarus fell into the sea near Samos and his body was washed up on the shore of a nearby island. People then named this island Icaria in his honor. They also christened the sea around the island the Icarian Sea.

A vast trove of anecdotal details shaped his reputation as an innovator in many fields. In Pliny’s natural history, the writer credited him with the invention of carpentry.

Greek mythology tells us that he created masts and sails for boats which would then be used by Minos’ navy. Pausanias attributed the construction of several impressive ancient wooden cult figures throughout Greece to this figure.

Others say he sculpted highly detailed statues. They were so detailed, in fact, that they seemed to be alive. Those statues, the stories say, would have escaped if not for the chains that bound them to walls.

Daedalus came to represent an anonymous Greek artisan. Additionally, they attributed many exquisite Greek gadgets to him.

Meaning of the Legend

You can see images of Daedalus and Icarus on many Greek vases, precious stones, and Pompeian murals. One famous Roman relief shows Daedalus wearing the wings he and his son used to escape Crete.

Diverse artists in later years also paid him homage. Pieter Brueghel drew the fall of Icarus. Anthony van Dyck and Charles le Brun also devoted some of their works to conveying the legends of Daedalus. He has also figured into Brill’s work and sculptures created by Antonio Canova.

The legends of Daedalus also inspired writers such as James Joyce and W.H. Auden. These and countless others have helped to keep the name and legend of this inventor alive well into the 21st century.

Daedalus’ story encourages people to carefully consider the long-term consequences of their inventions. Daedalus serves as a symbol of what could happen when inventions do more harm than good. For example, in the case of the story of Icarus’ wings, Daedalus helped to create something that led to negative consequences.

The same goes for the development of the monstrous, nearly inescapable labyrinth of the Minotaur. The construction of this maze made killing the beast really difficult.

Cronos Syndrome: The Fear of Being Replaced
If you are close to achieving your goals, or you already have, Cronos syndrome will probably make an appearance in your life at some point or another. Read more »
Link copied!
Interesting Articles
Authors
Haruki Murakami: Biography of a Best-Selling Japanese Writer

Personal Development
Stage Fright and the Fear of Failure

Most people have felt stage fright and the fear of failure at some point or another. These are normal sensations…