The Myth of Medusa and Perseus

The myth of Medusa and Perseus put a series of very interesting symbols into play. Medusa represents a woman cornered by the feminine power and Perseus is the symbol of a person who manages to overcome fear by projecting it in a mirror. 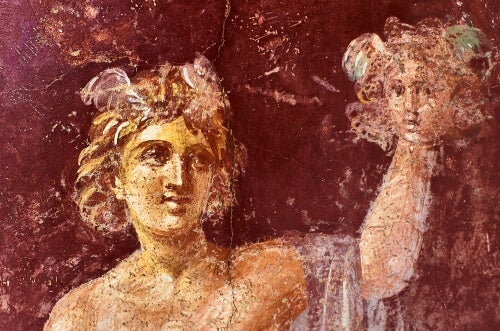 For some people, the myth of Medusa and Perseus is a metaphor for horror and how it’s actually possible to save yourself from it through art. For others, on the other hand, it represents a feminine myth, in which mistreated women become monstrous. This image, without a doubt, terrifies and stuns anyone who stands before it.

There are several versions of the myth of Medusa and Perseus. However, the most classic one tells that both had a tragic background. Medusa was one of the three gorgons, all daughters of Forces and Keto. Out of the three, Medusa was the most beautiful and also the only mortal one. Her beauty sparked admiration between gods and men.

Some say that she captivated Poseidon so strongly that he raped her on the marble in the Athena tempo. Athena, however, didn’t tolerate such desecration and, as a consequence, decided to turn Medusa into a horrible monster, just like her sisters. She gave her metal hands and sharp fangs. Suddenly, Medusa’s beautiful hair turned into snakes.

In addition, she gave her eyes from which a terrible light came out. Since then, everyone who looked at her face would be turned into stone. Lastly, she exposed her to the world of the living. Medusa was pregnant. From that moment on, she became one of the most feared monsters.

The origin of Perseus

The myth of Medusa and Perseus tells that, from an oracle, the king of Argos found out that his daughter’s son would kill him. To avoid having this prophecy come true, he locked his daughter Danae in an airtight bronze chamber that he placed in an underground place. However, Zeus was in love with her. He fertilized it by becoming a shower of gold which penetrated the chamber.

Later on, Perseus was born. His crying alerted the grandfather about what happened. The king then decided to lock Danae and Perseus in a wooden chest and throw it into the sea. The two were rescued on an island. Perseus grew up and became a beautiful young man who wanted to stay with his mother. Then, Perseus promised to kill Medusa as a means to avoid it.

Athena, who kept an old resentment toward Medusa, offered to help him, and so did Hermes. They guided him to go to the Graeaes. These were three prophetic elders, relatives of Medusa, who had only one eye and one tooth. In one moment when they weren’t noticing, Perseus stripped them of their eye and tooth. In exchange for returning them, they had to point the way to the Nymphs.

The myth of Medusa and Perseus tells that when the brave young man got to the nymphs, they gave him winged sandals so that he could fly through the air. They also handed him Hades’s helmet, which was made of dog skin. Whoever carried it would become invisible. Finally, they gave him a saddlebag. Meanwhile, Hermes gave him a sharp sickle and a shining shield.

Perseus was completely armed and ready to go look for the gorgons. On his way, he found many stone statues. Interestingly, they were the bodies of those who had visited the place and looked at Medusa in the face. He knew he had to be cautious, so he decided to wait for the right moment.

Once the gorgons fell asleep, Perseus placed his shining shield in a strategic position so that Medusa’s face would be reflected in it. That way, he could avoid looking her in the face. Once she appeared, he grabbed his sickle and cut off her head with a single cut. The horse Pegasus and the giant Crisaor came out of her body. They were the children she was gestating.

The myth of Medusa and Perseus, a beautiful story

The myth of Medusa and Perseus says that, since then, the young hero used Medusa’s head to defeat his enemies. Surprisingly, and in spite of everything, her head didn’t lose its power whatsoever. He put it in the saddlebag he carried and, thanks to it, he was able to face monsters and enemies. He only took out Medusa’s skull to turn whoever saw him into stone.

It’s said that the myth of Medusa and Perseus is related to art in a symbolic way. In particular, Perseus’ shield represents a way to face horror indirectly, which is basically what art does: it reflects. It allows us to look at horror in the eye, yet, at the same time, it prevents it from paralyzing us.

Likewise, Medusa’s head becomes the main weapon of Perseus. This, as well, can be seen in a symbolic manner. It’s with art that we manage to face those demons and internal enemies that we have inside. Medusa’s head would be the work, the result, the product of creation.

Daedalus: Greek Mythology’s Great Inventor
Daedalus is most famous for building the Minotaur's labyrinth, but he's also the protagonist of many other ancient Greek tales thanks to his talents. Read more »