The Inspiring Parable of the Unscented Flowers 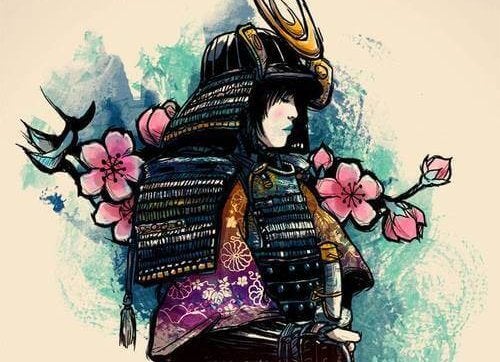 The parable of the unscented flowers tells the story of an old Samurai, a very wise man whom everyone respected. The old man always held meetings in his house to impart his teachings to young men, who listened to him with great interest and attention. They were about to receive an amazing lesson about anger and how to handle it.

His fame spread through all the nearby regions and people from different places began to arrive. The elderly Samurai spoke mainly about the importance of detachment and the importance of knowing how to eradicate the selfish emotions inside us.

“Everything that bothers you about other people is simply a projection of what you have not resolved in your own life”.

His most faithful disciple was a young man called Alino. He wanted to learn everything he could from the teacher and that is why he attended the meetings without fail every day. He also prepared tea for everyone and everyone considered him to be very helpful. The Samurai liked him because of his humility and his interest in other people. He would be the main one who would learn the important lesson of the Parable of the Unscented Flowers.

Anger and the parable of the unscented flowers

One day, in the middle of one of the meetings, one of those present spilled his tea on the clothes of another attendee. The latter didn’t hesitate for a second. He reacted immediately and aggressively pushed the one who had spilled the tea. “What’s the matter with you? You’re so clumsy!” he said. He told him that his clothes were made of Chinese silk and that now they were completely ruined.

The old Samurai remained impassive. He continued as if nothing had happened. Some of the people murmured in a low voice. It seemed unheard of for the teacher to allow such an argument in his own home. Most of them felt that he should intervene and rebuke that man’s arrogance.

Alino was confused. When the meeting ended, he couldn’t stand it any longer, and asked his teacher. “Why do you allow this injustice, knowing that just a word from you would have put that proud man in his place? Why didn’t you expel him from your house? “

The teacher just smiled. “There are some flowers that have no scent and that shouldn’t be in our garden,” he replied to Alino. His reply confused Alino greatly. He didn’t understand the teacher’s message. Then, the old Samurai added: “Anger is an unscented flower that only grows in gardens where there is no freedom.” This was the first lesson of the parable of the unscented flowers.

A few weeks after the incident, something happened that no one could have expected. The aggressive man returned to the master’s house, but from the moment he entered he was very hostile to everyone. He pushed his way through the crowd. He was almost shouting, and ignored the fact that the teacher was speaking.

Suddenly he did something that astonished everyone. He got up, went up to the teacher and, without saying a word, spat in his face. The teacher was silent for a few seconds. Everyone was stunned. At first nobody reacted, but soon angry voices began to be heard.

Alino was on guard. He took one of the sabers that were in the house. He said to the old Samurai: “Allow me, master, to give this man the lesson he deserves!” The teacher remained impassive and simply raised his hand, indicating that he should do nothing. It seemed that Alino had still not understood the parable of the unscented flowers.

The teacher asked for calm. He remained completely at peace. The aggressor was ready to respond to anyone who tried to attack him. There was a smile of satisfaction on his face as he defied the most famous man in the entire region. Suddenly, the old Samurai broke the silence. He looked straight at the man who had spat at him and said “Thank you.”

Nobody could believe what they were hearing. Alino didn’t know what to think. He said to the wise man: “What on earth are you saying teacher? How can you thank this ruffian who has come to your house for the second time to insult and dishonour you? How could you possibly thank him? “

The teacher calmly addressed the aggressor saying:  “Your gesture has allowed me to verify that the anger has disappeared from my heart. I don’t have to pay you back for this. I won’t let the unscented flowers grow in my garden.” Alino felt ashamed.

The teacher had been teaching them for months not to love themselves, and to avoid passions like anger. People who offend, who are aggressive, negative and critical are like flowers without any scent. The only sensible response is to ignore them, and not allow them to destroy our inner garden. That is the inspirational teaching of the parable of the unscented flowers, and now we just need to apply it to our lives.

Why Anger is Poisonous For Our Minds and Bodies
There are many different types of anger, ranging from annoyance to full blown rage. If we don't try to control our anger we could be doing serious damage to our bodies. Read more »
Link copied!
Interesting Articles
Wellness
The Effects of Distrust in Our Relationships

Personal Development
Are You Tied Down to the Familiar in Your Life?

We might all feel attracted to the unknown once in a while. Who doesn't want to learn and discover new…

Unfortunately, human relationships are riddled with manipulation. Usually it's unconscious. We unknowingly learn to be manipulative and unknowingly manipulate people.…