The Inspirational Story of the Circle of 99 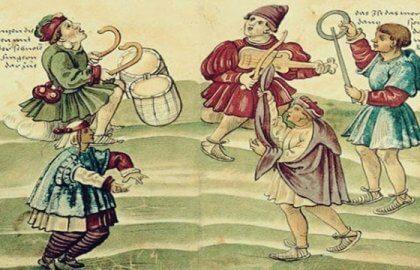 Once upon a time, there was a faraway kingdom with a very sad ruler. He didn’t understand the reason for his melancholy until one of his wise men helped him understand that it had everything to do with the circle of 99. It was a lesson he’d never forget.

It all started one morning when the king, deep in depression, saw one of this servants enter the room. The humble man smiled and happily hummed a tune. The king realized that the servant was always happy and wondered why. How could a servant be so happy, while he, the king, couldn’t find peace?

“True social progress is not about increasing needs, but in voluntarily reducing them. However, that requires humility.”

The king asked the man, “Why are you so happy?”. The servant didn’t know how to answer. “Why shouldn’t I be happy?” he finally answered. “I live in a palace, serving the most powerful person in the kingdom… What else could I want? I don’t see why I shouldn’t be happy with my life…”

This upset the king. He didn’t believe a word. How could a man with a house and a life much more modest than his own be so happy? The king threatened to behead him if he didn’t reveal the secret to his happiness. The servant apologized for offending the king but didn’t know what to say.

Wisdom and the circle of 99

Finally, the king told the servant to leave. He could barely stand the servant’s incessant smile. Even the threat of death didn’t really upset him. After the humble servant left, he immediately called the palace’s wise men. The mystery had to be solved.

When the wise men were all gathered, he ordered them to tell him why the servant was so happy with his miserable life, while he couldn’t stop feeling so sad. One of the wise men stood up and said, “It’s simple. The servant is happy because he hasn’t entered the circle of 99”. The king was intrigued. What on earth was the circle of 99?

The wise man told him that it was useless to explain the circle of 99 with words. He needed to see it with his own eyes. All the king needed was 99 coins of pure gold and he would show him how any happy man, after entering the circle of 99, would become depressed. The king accepted the challenge.

Entering the circle of 99

The king ordered that 99 coins of solid gold be made, the most valuable in the kingdom. He put them in a bag and took them to the servant’s house, accompanied by the wise man. They left the bag at the door with a note: “This is your reward for being a loyal and selfless servant. Enjoy”. Then they hid, to see what would happen.

The servant came home, saw the bag, and was very surprised. He looked around and then went inside the house, intrigued. The king and the wise man watched from outside, still hidden. The humble man took the coins and poured them out on the table.

He couldn’t believe his eyes. He started to count his new fortune, putting the coins into stacks of ten. When he got to the last pile, he thought something was wrong. The last pile had 9 coins, instead of 10.

The trap of the circle of 99

The servant thought a coin had fallen off the table, and looked for it everywhere, but couldn’t find it. He then thought aloud, “Someone saw the bag and stole a coin“. Then he wondered how long it would take him to earn another coin. He did some calculations.

Working normally, it would take five years. But what if he got more work? Maybe he could earn a coin in just two years. What about if he asked his wife to take on more work as well? Then maybe he could reach his goal in just one year…

From that day on, the servant became very distrustful and suspicious. He suspected that someone in the palace took the gold coin that, according to the servant, was missing from his fortune. He also worried about getting robbed again.

The servant never stopped making plans to earn one more gold coin. He was trapped in the circle of 99. From then on, he never thought of the things he had, only those he lacked. The wise man was right all along.

Happiness: A Path To Be Taken
Happiness is something we all search for. That feeling of complete satisfaction, of total contentment that is so difficult to describe. Read more »
Link copied!
Interesting Articles
Culture
Rapunzel Syndrome: Symptoms, Causes, and Treatment

“Dear Green Bathing Suit Girl” is the viral letter that tells us that it does not matter what we are like. It doesn’t make a difference if we are characterized…

Today we're going to talk about a drink that you've surely all heard about at least once. Knowing the scientific…

Culture
6 Teas That Will Help You Relax