The Importance of Accepting a "No"

Learning to accept a "no" is as important as learning to say it. Life is full of situations where you must give up your desires and demands due to the impossibility of making them come true. Accepting this fact will allow you to grow. 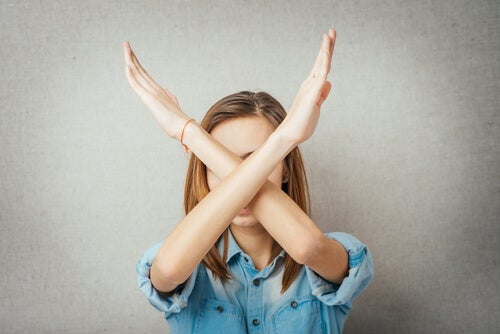 Much is said about the importance of learning to say “no” but people seldom mention the importance of accepting a “no”. Knowing how to say it is as necessary as knowing how to accept it. There are dreams and desires you just can’t bring to fruition and that’s inevitable. Thus, if you find it hard to take a “no” in any situation, life will be very difficult for you.

The stage of life in which it’s harder to hear a “no” is during childhood. This is normal at that age because children are extremely egocentric. The ability to see situations collectively develops over time, provided that their upbringing contributes to the development of this ability.

Accepting a “no” is confronting your limits head-on, even though, in principle, it sounds unpleasant to do so. It’s obvious there’s a desire behind it that collides with the negative response. Therefore, there’s a frustration to a greater or lesser extent. This isn’t bad in itself. It’s only a natural part of life and you should react naturally to it.

Everyone knows there are various forms of saying “no”. Some are temporary, while others are permanent. Likewise, some of them involve giving up something that isn’t so relevant, while others involve giving up something that you value, love, or need a lot. No human being escapes the various experiences of saying or hearing a “no”.

The negative is sometimes direct, like when you ask for something and they just deny it to you. Other times it isn’t the word in and of itself, but the facts that tell you no, that this time you’re going to have to postpone or give up something you want. Likewise, there are implicit “no’s”, which people communicate through a series of gestures that stand for rejection or apprehension.

Of course, it’s easier to hear a “no” when you know it’s a temporary or unimportant denial. Still, it’s difficult for some people to embrace and assimilate even the seemingly inconsequential denials. However, for most people, the difficulty appears with a definitive or relevant “no”. But why is it so important to learn to accept a negative?

Learn to accept to “no” from others

The source of “no” is often someone else. The one who says “you’re not accepted” for the job, or the project, or the university, or the promotion, or whatever. Or perhaps it’s the voice that says “Don’t touch me”, “I don’t want to continue this relationship”, or “I wasn’t invited to the party”.

Those kinds of denials are hard to accept at times. You must accept that others don’t have to take care of your needs, meet your expectations, or give you what you want. Others aren’t there to make your life easier. Everyone has a right to establish boundaries on situations that also involve them.

The difficulty in accepting such “no’s” generally implies that you’re failing to recognize the limits imposed by that “otherness”. To interact with the world is to interact with the difference and the mere fact that you want something from others isn’t enough to obtain it. People evolve a lot when they learn to accept others’ implicit or explicit “no’s”.

The “no’s” of life are much more forceful and unappealable. From the moment you’re born, people give you all sorts of things but they also deny you others. The limitation comes with you into the world when your parents raise you in a way in which you’ll avoid facing those realities because it isn’t helpful.

People don’t become strong when they lack limitations but when they learn to recognize and deal with them. There are many things you’ll have to wait or fight for or that you simply won’t obtain. Despairing or complaining aren’t smart ways to avoid the consequences of what others deny you.

You’re much stronger and happier when you learn to accept the “no’s” in life. Resisting will only increase your frustration and end up distorting or eluding your most authentic desires. In other words, you’ll stop living life because you’re longing for what’s impossible.

Link copied!
Interesting Articles
Cinema, Television, and Psychology
5 Movies That Will Open Your Mind and Soul

Have you ever been told that you're more mature than others your age? Or have you been told the complete opposite? You might have heard talk about "old souls" or…

Norman Bates is the protagonist of one of the most iconic and celebrated films in the history of cinema: Psycho (1960), directed by Alfred Hitchcock. Anthony Perkins brought to life…