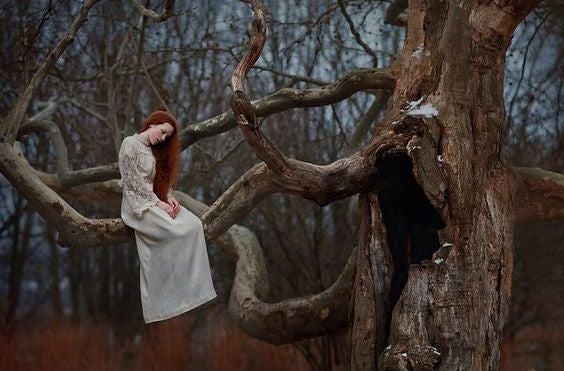 People surrounded by catastrophic thoughts tend to see dreadful consequences in all events. If their stomach hurts, they are afraid to go to the doctor because they suspect it may be a malignant tumor. If they light a fire, the image of a third-degree burn due to some carelessness appears in their head. When they get on a plane, the images of themselves putting on their life jackets runs through their mind.

By nature, we tend to react with a certain amount of fear or apprehension to the new or the uncertain. However, for some people that little cluster of fear becomes alarmism without limit, which besieges them and makes their existence a true hell.

“The sun shines everywhere, but some see only their shadows”

People with catastrophic thoughts are full of bad feelings. The thread of their reasoning is usually constructed from the premise “What if …” That’s why questions like “What if I take the bus and crash?” “What if I present my ideas and everyone makes fun of me?” “What if while crossing the avenue I don’t realize that a car is coming at full speed?” They always imagine the worst of all possibilities in every situation.

The nature of catastrophic thoughts

Catastrophic thoughts are not an independent problem. They are usually associated with much deeper anxiety and/or states of depression. For those who find themselves with a high degree of anxiety, for example, an increase in their heartbeat triggers fears they will suffer a heart attack. Those who suffer from depression visualize themselves in a situation of abandonment or rejection, living under a bridge, begging in a street or dying alone in a charity hospital.

The truth is that we all have catastrophic thoughts at times, but what makes them an important symptom is the regularity of those reasonings and their obstinate character. Of course we can go to the zoo and be attacked by a lion, but the chances of this happening are small. We can also be run over, but there are many more millions of people who do not suffer this type of accident than those who do.

The point is that, for those who have catastrophic thoughts, that tiny probability is oversized. This is because there is a distortion in the thinking and a failure to consider the objective data of probability of occurrence. Instead there’s a focus on the fears caused by the mind itself.

In other words, the idea of such absurd risks is repeated so much that the affected person ends up believing that their occurrence is highly probable. In this over-estimation of probability, other factors influence our own predisposition such as one’s environment or the media.

In the human brain, recurrent thinking influences even the way our neurons connect. The more you think about something, the more it comes back to mind. This is what happens in the case of catastrophic thoughts: since they are repeated so much, they become fixed. And as they are fixed, they are repeated constantly, although they are part of an evident self-deception.

Catastrophes and fear of living

Almost all human beings go through at least one catastrophic situation. Sooner or later we will be faced with the death of someone dear, with some health event that is difficult to manage or simply with the uncertainty of not knowing what to do after some drastic change. However, if these situations were a constant, we would not stand it.

What those who are besieged by catastrophic thoughts do not understand is that all such situations are likely to be addressed and overcome. What they fear deep down is remaining in a situation of extreme vulnerability. Situations that they cannot react to or which leave them, literally, paralyzed and unable to do anything. This supposes that we ignore a fact: we have the resources to offer a response to any situation, however difficult it may be.

What lies behind people with catastrophic thoughts is surely a difficult childhood. They learned as children that the environment is hostile and that dangers lurk. Surely when they were young they did not quite understand where the next risk was coming from and this made them build up an overly defensive thinking mechanism.

To face these types of thoughts we must pause to evaluate them and pass them through a “reality filter”. In addition, it will be good for us to think about the possible responses that can be given to those dangers, starting with prevention.

It’s Not What Happens To You, It’s What You Think

It’s not what happens to you, it’s how you think it about it… so with our thoughts we make the world See more »

Every self-help book talks about the importance of praise during childhood. It's definitely something that increases our self-esteem and shapes our personality. It's really simple: we praise our children when they…

Psychology
Today I Choose to Make My Happiness a Priority

Today I choose to pay a little more attention to myself, to take care of my inner garden of happiness, to…