The Hamilton Anxiety Rating Scale reveals something very important: not everyone experiences anxiety the same way. This state is also made up of psychic states and psychosomatic symptoms. 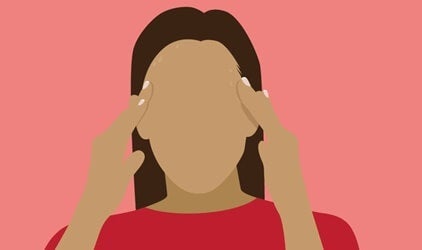 The Hamilton Anxiety Rating Scale is one of the most commonly used psychological questionnaires to clarify the degree of anxiety a person suffers from. Therefore, it isn’t a diagnostic instrument but a useful and highly effective resource for assessing the state of a patient, their psychosomatic symptoms, fears, and cognitive processes.

This scale, designed in 1959 by Max R. Hamilton, a Professor of Psychiatry and later president of the British Psychological Society, is still one of the most commonly used. He believed that not everyone experiences anxiety the same way.

He wasn’t really trying to come up with another instrument for diagnosing a disorder but a highly rigorous resource with which to assess the degree of anxiety in a person. Also, one with which he could differentiate psychic anxiety from somatic anxiety due to its importance in defining the capacity of control that people have over this overly exhausting reality.

Later, in 1969, Dr. Hamilton wanted to delve a little deeper and improve the scale. Thus, he made a distinction between somatic muscle signs and somatic sensory signs from among those items focused on assessing somatic anxiety. Thus, with such a degree of refinement when designing a test as tightly as possible, you can probably intuit the obvious clue in this regard.

Each person experiences anxiety differently. Thus, no two realities are identical. This means that not everyone can use the same therapeutic strategies. Tests such as The Hamilton Anxiety Rating Scale are mainly suitable to maximize treatment based on the particular needs of a patient.

The Hamilton Anxiety Rating Scale is a clinical assessment instrument for measuring a person’s degree of anxiety. It’s useful in both children and adults. Also, it’s an instrument both doctors and psychiatrists can use. But remember that it doesn’t determine the diagnosis of a specific disorder (although it can help all the same).

There’s also a problem that health professionals are already perceiving with this clinical resource. The Hamilton Anxiety Rating Scale is easy to access and anyone can download it or even take the test online. Thus, it’s common for people to consult their doctors claiming they suffer from severe anxiety.

You must know this kind of self-diagnosis isn’t accurate. This is because this type of test, like any other form of clinical evaluation, must be applied by a specialized professional. Moreover, the Hamilton Anxiety Rating Scale has an item where the researcher must assess the state in which a patient performed the test.

Therefore, it’s a rigorous priority in this regard because the interview itself during the test is one of the main keys to a good diagnosis. At least according to studies such as the ones conducted by psychiatrists Katherine Shear and  Joni Vander Bilt on the Hamilton Anxiety Rating Scale.

This test consists of 14 items and each question has five answer options — ranging from not present to very severe. Thus, a score of 17 or less indicates mild anxiety. Furthermore, a score between 18 and 24 points hints to moderate anxiety. Finally, a score between 24 and 30 means a person is experiencing a severe degree of anxiety.

The essential aspect that must be emphasized is that the Hamilton Anxiety Rating Scale is a freely available resource so you can use it at your convenience. However, only a psychiatrist or a psychologist is truly qualified to make assessments and diagnoses.

Based on the results, the professional will propose some kind of strategy. Dr. Hamilton’s purpose back in the 60s was to be able to obtain an accurate and reliable profile in regard to the level of anxiety of each person. Only then will an anxious person be well-adjusted and act in their best interest.

Finally, the questions aren’t the key to proper evaluation. Instead, what’s important is the assessment of the patient’s tone of voice, posture, and understanding — or lack thereof.

Eight Interesting Facts about Anxiety
There's been a lot of research about this mental state. However, in this article, we'll bring you some facts about anxiety you may not know. Read more »
Link copied!
Interesting Articles
Clinical Psychology
Delayed Sleep Phase Syndrome