The Gahuku-Gama: Equality and Solidarity

In 1962, French anthropologist Claude Lévi-Strauss wrote about the practices of the Gahuku-Gama community in New Guinea. For them, games weren't just for fun or entertainment, they were a microcosm for the values of society. 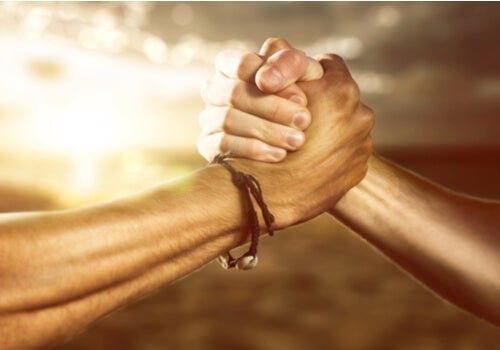 The Gahuku-Gama or Gahuku-Kama people of New Guinea have a very different set of customs and morals to the rest of the Western world, especially when it comes to their views on conflict and competition. This community does everything in its power to maintain peace and harmony.

Their unique practices were described by Claude Lévi-Strauss – the father of modern anthropology – in his book, The Savage Mind. The Gahuku-Gama community was isolated from the Western world until 1930. At that time, they first came into contact with missionaries, who predominantly came from Europe.

Lévi-Strauss explained that the missionaries first taught the Gahuku-Gama to play soccer. They later adapted the sport to match their own values and customs.

Surprisingly, they decided against making soccer a contest between opposing teams. Instead, they would often play for days, playing as many matches as necessary for both teams to tie.

For the Gahuku-Gama, the idea that some people win, while others must inevitably lose, is simply unacceptable. Both conditions are degrading, and compromise the stability of the group as a whole. As a result, they decided to take soccer practice to a whole new level, turning it from a simple game into a sort of ritual.

For this New Guinean community, solidarity is a fundamental value. As a result, they couldn’t accept a game in which the aim was for one team to achieve victory over the other. The Gahuku-Gama place great value on effort and, to them, it seemed deeply unfair that one team would lose, no matter how hard the players tried.

For this same reason, their soccer matches often last several days. Although the goal is for the teams to ultimately tie, that doesn’t mean that one team is allowed to make concessions for the other – this would be considered dishonest. The goal is for both teams to grow and evolve to the point where everyone is on an equal footing. By tying, both teams simultaneously become both winners and losers.

You might think that the Gahuku-Gama are an exception. Many theories of human behavior assert that war, competition, and conflict are an inherent part of human nature. In theory, this may well be the case. However, rather than competition and confrontation, many cultures promote a sense of solidarity.

There’s evidence that some ancient cultures held similar values, back before the time of the Ancient Greeks. In fact, some groups, such as the Inuit peoples of Alaska have never waged a single war in all their long history.

While many of these peoples live in areas where resources are scarce, they have decided that, instead of competing for what little there is, the solution is to remain united for the common good. In a way, this too is a form of draw, with everyone winning and losing simultaneously.

On the other side of the world, in Patagonia, there are other communities with similar customs and values. For example, the Yaghán or Yamana – of whom there are very few left due to the interference of the “white man” – have no record of their people ever fighting in any war or any other kind of physical confrontation with other communities.

What can we learn from the Gahuku-Gama?

We’d save ourselves a whole lot of worry, stress, and anxiety if we were more open to some of the customs and practices seen in these communities. Many of our problems come from our unhealthy obsession with success and failure; from feelings of inferiority and superiority that keep us up at night; from our inability to handle conflict, and the subsequent desire to impose ourselves.

Values such as those seen in the Gahuku-Gama tribe reflect a collective will to grow, demonstrating that individual growth isn’t enough. The work is only complete when we succeed in helping others grow with us.

We all feel more at peace when we achieve a sense of fairness and equality, a principle of universal justice by which we can value others as well as ourselves. That’s exactly what these ancient cultures do by using a mixture of new games and old customs to ensure individual and collective peace.

The Moral Brain: The Neuronal Basis for Ethics and Human Values
Neuroscientists have discovered the brain circuits that make up the moral brain and explain why we carry out altruistic and prosocial behavior. Read more »

Link copied!
Interesting Articles
Social Psychology
The Challenge of Disconnecting in the Era of New Technologies