The Extended Mind: Connecting Beyond Brain and Body

The concept of the extended mind comes from a philosophical theory. The essence of your thoughts, desires, and creativity goes beyond your brain. Read on to learn more! 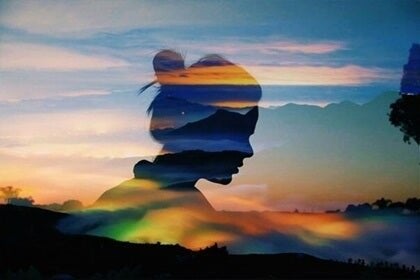 The extended mind comes from a philosophical theory as revealing as it is interesting. According to the principle, your mind doesn’t just live in a universe of neural connections, limited by the brain. Thus, the essence of your thoughts, creativity, emotions, and desires expands to other people, creating social relationships, language, and technology.

The hypothesis of the extended mind may seem radical and even difficult to believe. For almost all psychologists, for example, all cognitive processes are basically a result of biochemical operations. People receive stimuli. Then, they’re processed in the brain. Finally, they respond according to the stimuli.

This focus is materialistic; it’s the idea that the mind doesn’t go beyond limits. Meanwhile, Descartes put forth another idea. The celebrated French philosopher, mathematician, and physicist showed that the body and mind were two different and completely separated dimensions.

These days, this premise has made people reflect on different possibilities. Thus, many philosophers and social psychologists now understand that the mind doesn’t only inhabit this territory of a body and a neurological network.

The mind expands, advances, and connects to share your social world, interactions, and creations.

The extended mind: when your thoughts move beyond your body

The classic form of psychological science presumes that all cognitive processes are inter-cranial. In other words, your mind resides in an internal cubicle while society and the world are simply outside of it. The theory of the extended mind, however, doesn’t see it that way.

It accepts that all thoughts, reflections, desires, creations, and motivations stem from the brain. However, they don’t stay there. The function of the mind is to emerge and to interact with the environment. This helps to both create an environment and make sense of it.

The theory of the extended mind appeared for the first time at the end of the 1990s. Philosopher Susan Hurley postulated it. This University of Bristol professor revolutionized a good part of the academic world with her book Consciousness in Action.

In it, she criticized the classic assumptions of cognitive psychology. According to those assumptions, the mind is the entity that limits itself to processing stimuli (input) and giving responses (output). She didn’t agree.

Later, Andy Clark and David Chalmers from the University of Oxford published studies like the one in the book Supersizing the Mind, published in 2008. This book helped put the theory of the extended mind on the map. These experts believed that scientists had to dispose of the classic idea that the human mind resides only in people’s heads.

Thus, we must go beyond that limit, navigate it, and dare to go further to wide perspectives, as this will help us understand what this world and society are really made of.

Mindware, the mental machinery that goes beyond the brain

Mindware is a new concept within social sciences that’s worth talking about. This term considers the combination of resources that makes up the human mind. These resources include neurological, physical, biochemical, and non-physical processes.

But what exactly do scientists mean by this last idea?

The extended mind and artificial intelligence

A part of the scientific community doesn’t consider the theory of the extended mind positive. They find this cognitive externalism uncomfortable. That’s because it situates the universe of consciousness outside of the body. It puts them outside the limits that everyone thinks they control.

As a result, certain branches of philosophy and neuroscience predict that people could soon have portable consciousnesses. These would be neural implants that could give you certain abilities. In addition, they’d be “mental units”, external programs that can be installed in your mind as part of a software to make it more efficient.

All this dates back to what Donna Haraway, a professor at the University of California, explained in her 1983 essay “A Cyborg Manifesto”. In other words, in the future, scientists could create hybrid organisms where both organic and technological elements could form more advanced humans.

Nowadays, the world’s large technological corporations are already laying the foundations for artificial intelligence. The extended mind and portability are basic resources that could give robots the cognitive capacity to interact in certain environments.

However, as Antonio Damasio says, artificial intelligence could never reach the level of humans. Why? Because it’d be missing an essential, basic, and determining element: emotions.

The Mind of a Baby – What’s it Like Inside?
Do you ever wonder what the mind of a baby is like? Is it the same as that of an adult or an older child? Actually, this is a rather fascinating subject. Read more »
Link copied!
Interesting Articles
Theories
Locus of Control: Is Yours Internal or External?