The Dilemma of Conflicting Messages

The most likely result of sending conflicting messages is neither the sender nor the receiver feels good about it. Continue reading to learn more about the double bind! 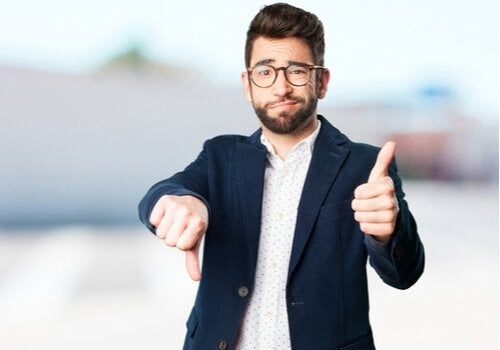 Have you ever thought about the difference between what you do and say? Why would someone make a statement that’s the opposite of how they really feel? Conflicting messages are confusing. Today’s article is about them from a psychological perspective.

What’s a contradictory message? Continue reading to discover some of the keys to understanding this type of communication, including examples. In addition, you’ll learn about some of the current research, especially the studies by Gregory Bateson, a social scientist.

“Language commonly stresses only one side of any interaction.”

What are conflicting messages about?

Contradictory messages are those that transmit dissonant information from the same source. Therefore, they’re paradoxical in nature. There have been reviews from:

Gregory Bateson, an anthropologist and linguist, spoke of conflicting messages. He mainly focused on the systemic model. He mentioned the double bond theory, emphasizing the association between members of a system. Also, he developed it to explain the psychological causes of schizophrenia. A condition associated with communication patterns.

Dual links are communication dilemmas that originate from the antagonism between the content of different messages with the same source. Thus, they produce confusion in those who receive them.

However, this theory has been already revised and expanded, pushing the limits of schizophrenia. Also, they applied it in other contexts and suggested that, for example, double bonds be used by some as a means of control or manipulation.

When it comes to conflicting messages, the sender may say there’ll be bad consequences if the receiver doesn’t observe certain behavior. Also, it gives abstract orders that contradict this mandate. Here are some other characteristics of this type of messages:

There are researchers who even claim these are present at the origin of some pathologies. This doesn’t mean they’re the cause, but rather one of the factors that promote or spark them (triggers).

Currently, there are various investigations in this framework. For example, the article by Leonardo Gabriel and Paula Gabriela Rodríguez-Zoya published in the journal Palabra Clave (In English: Key Word) show how communication and social interaction processes can distort or hinder social representations and social communication in the dual-link theory

Also, there are other types of explorations. For example, those focused on proposals for intervention in dual-link situations in teacher-student interactions. This idea is presented by García-Castro, Saneleuterio, and García Ramos in the journal Psicología y Educación: Presente y Futuro (In English: Psychology and Education: Present and Future).

Anyone can receive toxic contradictory messages. Keep in mind that they can be recurring and have implicit contents that confuse, block, and can lead to:

People who generate these types of messages are also affected, neither are their desires satisfied nor their needs met. Similarly, for the dual-link to happen, a relationship must be significant. This is because the disappointment of failed expectations may be deeper.

One example of this type of message happens when a mother communicates love to her offspring while rejecting them somehow. Another example is when one partner says something along the lines of “Do whatever you want” or “Fine” to their significant other. Also, when you say you trust someone and, yet, maintain a vigilant attitude at all times.

In short, the very demand that’s manifested in the message makes it impossible to know which way to go in these situations. Thus, the conflicting messages will cause discomfort to both parties, but particularly in the person who sends the messages. This is because it’ll be very difficult for them to get the response they want. The receiver just won’t know what to do.

Assertive Communication with Your Family
Communication is the basis for a good relationship with your family. But how can we get them to listen to us? It seems difficult, right? Read more »

What exactly is the narcissistic supply? Before defining it, let's first analyze the concept of narcissism: what does it mean…