The Cow and the Ravine: A Moral Story to Make You Think

This story is about a Zen master and a disciple who are eager to learn the secrets of life. Thus, the two embark on an aimless journey. Read on to discover it! 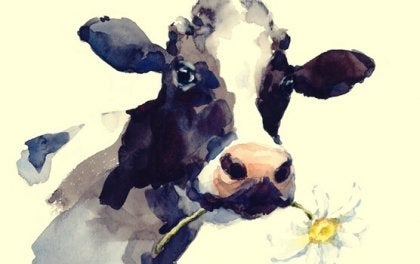 This moral story began in a faraway Buddhist monastery. A restless young man arrived there one day, wanting to learn from the teachers. His desire was to become wise and to understand how they lived. The priests and teachers were pleased to receive him.

The young man spent some time working there and helping them in many ways. He cleaned the stables, served the food, and dusted everywhere. He also fed the animals and looked after them. After some time, the wisest people in the monastery realized that he was a humble and obedient young man. They decided that the time had come to promote him.

The story tells us that he was assigned to one of the wisest priests who would take care of his training. The disciple was happy. The teacher told him that they would need to leave the monastery and travel the world to discover the great secrets of life. They prepared a few provisions and some clothes and left very early in the morning with an uncertain destiny.

“We can’t become what we want to be by remaining what we are today.”

An encounter that left its mark

The days passed. They had few clothes and were starting to get tired. One day, when the night was closing in, they saw a house in the distance and went there to ask for food and shelter. However, it seemed that the inhabitants of that humble house had little to offer them. The walls were barely standing and the fields around them were deserted. Nevertheless, the master told the disciple to knock on that door and ask for help. The young man did so.

The family welcomed them with open arms. They warned them that they were very poor, but that they would make a place for them to sleep anyway. They also shared their dinner with them.

When everyone was at the table, the teacher asked them how they made their living. They answered that they had a cow, who gave them milk. With the milk, they made cheese and butter. They sold these products in the village to earn enough money to live.

The teacher was silent. Then, he informed them that he, along with his disciple, would leave very early in the morning. He thanked them for their kindness, for the dinner, and for the shelter. Then, he went to sleep. At dawn, the master and his pupil got up and set out on their journey.

As soon as they left the humble house, the teacher said to his disciple, “It’s time for you to learn your first great lesson”. He asked him to go to the stable, untie the cow, and to take it with them. The disciple hesitated. How could his teacher ask him to do something like that? What kind of lesson would he learn from stealing from a humble family? Yet, as he had always done, he obeyed.

The two of them continued along the road, leading the cow with them. When they had walked a couple of miles, they reached an area full of cliffs with a ravine. Then, the master told the disciple to throw the cow down the ravine. Again, the disciple hesitated. Was his master totally evil? What was he going to gain by hurting that family so badly? He didn’t understand the meaning of this moral story.

The young man did what his teacher asked him to do. He took the cow, which resisted greatly. However, with a great deal of effort, he carried out his master’s orders. The cow fell down the ravine, and the two of them continued on their way. The master smiled, but the disciple didn’t know why. Neither did he understand what kind of lesson he was giving him.

The meaning of the moral story

The master and the disciple continued visiting many different places. In each of them, the young student learned many lessons about the secrets of life. Several years went by, and the wise man decided that the young man’s training was over. They both returned to the monastery.

The young man felt very peaceful and happy. He felt different. However, he was tormented by the memory of that humble family that had been deprived of their livelihood. No matter how much he thought about it, he couldn’t find the meaning of that lesson. Thus, as soon as he had the opportunity, he returned to the place where it had all happened. He wanted to apologize.

When he arrived, the place bore little resemblance to the place he remembered. Instead of the humble house that was there before, there was now a beautiful dwelling. The abandoned fields of the past were now fertile and full of life. Stealthily, the young man knocked on the door and the couple opened the door, with happiness etched on their faces.

They were happy to see him. They told him that the cow had disappeared, just after he had stayed there with the teacher. Necessity had forced them to work the fields, sow, and find new ways of doing business. Everything went well, and they progressed.

The young man finally understood the lesson. What about you? Maybe you can learn from this moral story too!

A Short Story about Prejudice: “The Cookie Thief”
In this short story about prejudice, you'll learn that no matter what happens in life, you should keep your heart open for love and kindness. Read more »
Link copied!
Interesting Articles
Culture
What Happens After Quarantine Ends?

Psychology Today
The Proliferation of Pseudoscience

Sometimes we get so carried away with our to-do's that we forget why we're even here. Or we depend on others…

Interesting Articles
Educational Psychology
The Differences Between Genius and Gifted