Group Cohesion: The Relationship Between Cohesion and Performance

Group cohesion is one of the most important elements to understand how a group can come to be, how it influences its members, and the consequences of this membership in different variables (such as performance). The present article shows studies, such as the minimum group paradigm, to explain what cohesion is and how it relates to the overall performance of a group. 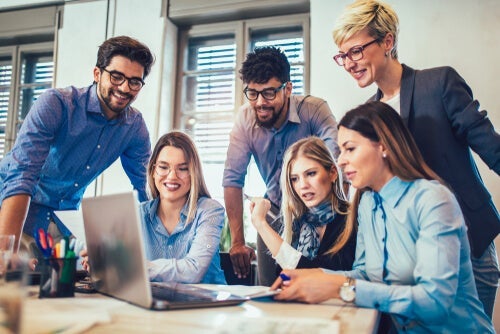 Many elements characterize the structure of a group, such as order, hierarchical distribution, influence, prestige, and differentiation. Although most people know this, the truth is that the operation of a group is based on the distribution and configuration of some elements, such as roles, norms, and group cohesion. All these elements act like a “glue” that turns ordinary people into a group.

That way, people can come together and call themselves a group. However, that wouldn’t necessarily make it a group per se. Groups require a shared identity, a structure, and interdependence. Based on these variables, it’s safe to say that group cohesion is different.

Therefore, cohesion is the “glue” of a group. Now, several types of cohesion can manifest in a group. Let’s see what they are.

The paradigms of group cohesion

The world is a very globalized place with large companies being developed in the blink of an eye. However, sometimes people don’t consider important elements of individual and group psychology in favor of greater benefits.

The managers of a company seek the best possible performance from the workers, but sometimes they do it through the use of unnecessary tools or in scenarios that don’t work. In a way, they don’t finish refining or incorporating the elements that need enhancement. This could be the case of group cohesion.

Haste and poor organization can help a conglomerate of people work together to obtain the best results. Although incentives can be offered to make it that way, it seems a wise solution to study the relationship between group cohesion and performance in order to know if this independent variable would modify the dependent one.

To do this, we’re going to talk about group cohesion based on interdependence, shared identity, and structure. Some paradigms shape the idea of ​​group cohesion, which explain it through experiments. Now, said experiments helped researchers conclude that cohesion is very relevant when it comes to predicting people’s behavior and performance.

What’s the minimum condition for a group of isolated individuals to be considered a group?

The people were divided into two groups: the Klee group and the Kandinsky group, without knowing each other previously. Through this experiment, the researchers wanted to see if each individual would raise their social identity within the group and favor it despite not knowing anyone there.

The answer was yes. 77 percent of people chose the option that benefited their group against the other. 15 percent acted with equity. However, they observed that the general tendency was to systematically favor everyone in the group regardless of whether one individual was harmed.

Through the minimal group paradigm, we can explain cohesion based on a social category. In this sense, the fact that several people can become actual group members seems to be enough of a differentiating element for a group to come together.

Theory of social identity: self-concept as a regulator

Once again, Tajfel studies group cohesion by analyzing self concept, an important variable in personal psychology. Basically, self-concept refers to the image every individual has of themselves. Now, there are two important aspects to consider in self-concept.

In order to truly belong to a group, it’s important to know yourself first. Moreover, something crucial that defines group membership is each member’s search for positive aspects of their identity. Some aspects of the group may be beneficial to some of its members and detrimental to others.

From this theory, group cohesion emanates from the need to maintain self-concept. Those who join a group are looking to nurture their self-concept in a positive way.

The relationship between group cohesion and performance

From the studies and experiments conducted by social psychology, and knowing the reason for group cohesion in certain groups, we’ve come to some conclusions about the relationship between cohesion and group performance.

According to the satisfaction of needs model, group cohesion isn’t previous to the performance in the work carried out by the group. Actually, it seems to work the other way around. Performance favors cohesion. If a political party wins the elections in a country, cohesion in that group is likely to increase as a consequence of the good results.

Is there a relationship between the two?

The data suggest the following conclusions:

The greater the cohesion, the greater the pressure or influence of the group on its members, both in socio-emotional aspects and in those related to the tasks. On the other hand, the attraction that gives rise to cohesion and, consequently, to the ability to influence, can be an attraction fueled by the personal characteristics of the members and the group’s goals.

Social Identity: Why We Feel The Need to Belong
Social identity is the measure of how we identify with a group or a movement. But it is also a lot more than that. Read on to learn more about social identity. Read more »
Link copied!
Interesting Articles
Social Psychology
Dutton and Aron and the Misattribution of Arousal Theory