The Cherokee Legend of the Two Wolves, or Our Inner Forces 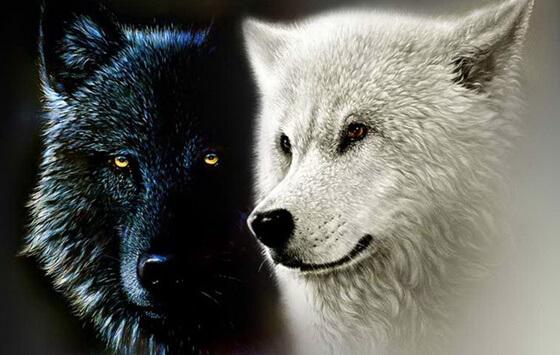 The Cherokee legend of the two wolves tells of a continuous battle between two forces inside us. It is a conflict between our darker side (the black wolf) with our more luminous and noble side (the white wolf). That duality between good and evil, between joy and pride, guilt and humility, defines much of who we are.

Maybe you’ve heard this story before. While there is some doubt about whether this is really a Cherokee legend,  there are certain references included in the oral tradition of small social groups of the Southern Appalachians.

Read on for the story — and an interesting variation…

The Cherokee legend of the two wolves: the conflict of internal forces

The Cherokee were one of the so-called “Five Civilized Tribes”. Known for their cultural wealth, language and traditions, they are undoubtedly one of the native cultures that has had the greatest impact on Western society. We know of many of their stories, rituals and their mysticism. They were collected in interesting books such as Cherokee Clans by Professor Panther-Yates.

As part of their immense legacy, the Cherokee legend of the two wolves is one of the most popular. The story is told as a wise lesson from an old man to his grandson. He explains that a terrible battle between two wolves is unleashed every day inside the hearts of all men.

These two animals symbolize two opposing forces. One is evil, the old man tells his grandson. It is anger. It is envy, greed, arrogance and even sadness. It’s the feeling of inferiority and the ego. The other force is kindness, joy, love, hope, serenity, humility, compassion, and of course, peace.

When the young Cherokee asked his grandfather which wolf is going to win that battle, in most versions, he responds: the one you choose to feed will win. But there is another version, perhaps much more interesting as well.

It is where the old Cherokee warrior tells his grandson that both must actually win. Because the battle is not a matter of strength, but of balance. We have to feed the two wolves because we need both. We must guide them both along the right path…

Do not feed only one wolf: they must both be present

Life can be happy or sad, benevolent or brutal. Humans weave complex stories of love and hate, of serenity and loss. We are aware that, effectively, inside us there are always two opposing forces that we’re not completely able to control. They fight fierce battles inside us.

This Cherokee legend of the two wolves explains that it’s not about feeding a single wolf and starving the other. Humans are essentially made of a ying and a yang. It’s a duality where, far from discarding or hiding a part of us, we must take it into account, make it visible and control it in order to live in balance.

The old warrior tells his grandson that if he chooses to only feed the white wolf, the black wolf will hide in every corner and stalk him whenever he sees him weak or off guard. The old warrior says we should not belittle that animal that is dark as night.

Because whether we believe it or not, the black wolf also has many good qualities: determination, tenacity, courage, strategic thinking… Some are virtues that the white wolf lacks. Feeding both lets us take advantage of the best of each. It enhances their best version, identifies their needs and trains us to live in harmony.

As we can see, the Cherokee legend of the two wolves teaches a valuable lesson about balance and emotional management. We learn that distributing forces intelligently, feeding both wolves, will give us a better life.

Everyone Has Their Own Inner Struggles
All of us are fighting our own inner battle. For some of us, it's like World War III in there. And we don't always know the details of people's inner struggles. Read more »
Link copied!
Interesting Articles
Culture
7 Signs to Detect a Toxic Marriage

In today's world, we have broken many barriers of hardship to create a common culture of making things easy. The…