My Grandfather's Legacy: An Eternal Bond 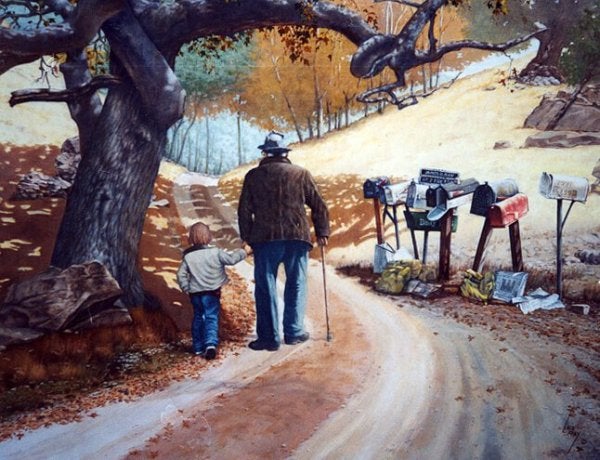 The legacy my grandfather left me can’t be measured in material goods, old stopped watches or black and white photos.

The true gift he left me was the time we shared together. The slow strolls through fall leaves on the way home from school, the taste of the chocolate he kept in his pocket, or the hours during the summer that we spent by the sea… of which he knew a thousand tales. An endless number of epic tales that swayed between truth and fiction.

Grandparents offer us those intense bonds that tie generations together. They’re in charge of passing along values and educating us through emotions and experience. They are playmates, confidants and counselors. A grandparent’s role has many facets.

While a grandparent’s job is also to teach, their mission is not exactly the same as that of our parents. A grandfather, a grandmother, they’ve already lived through their stage of parenthood. Now it’s their time to portray a different role and even to relive their childhood.

They are trees of life where we can shelter new generations.

We’ll never know if our grandparents chose to be grandparents. Grandchildren come into the world waiting to be loved, cared for and pushed towards the world with trust and confidence. Every child needs to establish strong bonds with those around them. If parents are important, so are grandparents.

We carry a bit of their blood and in some way we extend their legacy into our generation. Nevertheless, there are many other aspects that nurture this relationship which go beyond a common genetic code.

Have you noticed this ability in most grandparents? When you came home from school and your grandfather picked you up, you knew the afternoon would play out in a slow more relaxed way. We will also never know if our grandparents asked to relive their childhood through us. But, in some way, they were almost doomed to do so.

They shared our games, our puzzles. Nowadays, they’re even quite handy with technology. They share laughter and secrets with their grandchildren. They create moments with intense emotional loads, different than the ones you share with your parents.

Grandparents almost never reprimand you. They’re a bit more liberal, and also, they know how to listen. They have time to spare. Better yet they make time stop for their grandchildren.

This fact is as interesting as it is true. According to many studies on gerontology and family psychology, the role our grandfathers portray is different from the one portrayed by our grandmothers.

Grandmothers are full of dedication, care and attention. They’re the ones who worry about our nutrition and well-being. In a way, they’re more grounded to reality in order to be useful. Grandfathers, on the other hand, provide wisdom from the past and a personal legacy that’s passed onto their grandchildren through thousands of stories. Tales that children listen to with wide eyes and racing hearts.

Children love to hear stories, know where they come from, and see the world through the wise eyes of their grandparents. It’s a unique wisdom that’s passed on generation to generation, never to be forgotten.

They’re our allies in moments of crisis

Grandparents are trees of life where you can shelter the whole family during times of harmony, but also through stormy weather. Teenagers, for example, tend to find a certain peace in this bond with their grandparents, who can also serve as mediators with the parents.

Grandparents are often criticized for giving in too much, for not being able to say something negative and being a bit biased towards grandchildren, rather than their own kids. Grandparents find themselves at a point in their lives where they leave aside conflicts and prioritize the emotional value and closeness to their own kin above all things.

My grandfather wasn’t just a storyteller. He was a man who couldn’t stand the silence of an empty house or the noise of a room filled with arguments and fights. My grandfather was an ocean of tranquility that provided a serene breeze during family crises. Nobody ever knew how he did it. But, thanks to him, I had a safe and happy childhood.

A childhood full, very full, of personal legacies more valuable than the treasure in the pirate stories he told me as a child.

Remember that person who stood out from the others? The one that always seemed to want attention? No doubt that they…

Wellness
Everything Will Fall into Place

How excessively do we worry? When are we not thinking about how we will do in our new job, how our child will…

Wellness
Compassion is the New Therapy - be Gentle on Yourself

The term compassion has been undervalued. Currently, it is usually associated with charity and pity. The same thing happens to…

Why live more like a Zen monk? Because everyone can use a little more concentration, tranquility, and mindfulness in their…