When you read the word "surprise", you probably think of something positive, presents, or surprise parties. Your brain loves this effect as well- Keep reading to find out why! 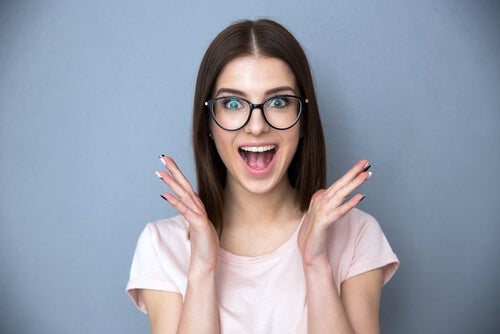 Why does the brain love surprises? Surprise is a basic emotion caused by an unforeseen stimulus. When the surprise isn’t pleasant, it becomes a negative emotion such as fear, rage, or sadness.

But when the surprise is positive, the result is pleasurable and it triggers an intense activation in certain areas of the brain. These areas are responsible for other emotions, such as contentment.

Thus, we could say that there’s physiological evidence that the brain loves surprises.

Involved areas of the brain

The nucleus accumbens, which is part of the basal ganglia, plays an important role in the processing of surprises.

Apparently, it activates when you’re in an unpredictable situation. This happens because the brain, unconsciously, expects a reward.

Like in other emotions, the amygdala also has an important role in surprise. It helps you decide if what you discovered is good for you or not. In this regard, two different groups of neurons activate:

Negative surprises usually demand a fast reaction from you, while positive ones lead to calmness and happiness.

Numerous researchers have dedicated their efforts to knowing why this occurs and if surprise can be used to apply some kind of positive intervention for therapeutic purposes. Along this line, some American scientists showed that the nucleus accumbens activates when an unexpected stimulus manifests.

Curiously, the nucleus accumbens is an extremely important area of pleasure in the brain. This is probably the reason why the brain loves surprises. It doesn’t matter if the surprise is good or bad, as this region lights up every time, activating pleasure mechanisms.

A perfect example is the fact that many people love going to haunted houses. They find many “surprises” that at first glance should be negative and lead to emotion such as fear or disgust.

Effect on learning and memory

Learning is one of the most studied cognitive processes in psychology and neuroscience. Over the past 50 years, scientists have identified the factors that influence or produce learning that people don’t forget, and surprise is one of them.

According to some authors, the strength with which one element is associated with another gets stronger and stronger until it ceases to become surprising. In other words, if you present Stimulus A with Stimulus B (unpredictable) several times, a person will expect Stimulus B. But once they realize that they’re always connected, their reaction will be less intense. As a result, scientists have proposed that, when a stimulus is surprising, it’s more likely to stay in your memory.

This relationship between learning and surprises in the brain has been proven in recent neuroimaging studies.

In 2001, a group of British and Australian researchers observed what happened to the brain if a surprise was included while they were learning something. They concluded that the nucleus accumbens activated less and less as participants became familiar with the presentation of the stimuli. However, when they saw another surprise, it re-activated.

Studies also showed that, when situations happen around the same time as a surprise, they stay in a person’s memory for longer. This might be because surprises initiate a series of cholinomimetic and dopaminergic mechanisms that increase attention and motivation.

Life Surprises You When You Least Expect It
And without knowing how or why, life always ends up surprising you when you least expect it. Is it that maybe we don't have any control over our destiny? Read more »
Link copied!
Interesting Articles
Basic Psychological Processes
The Wandering Mind: Why You Should Know What it Is