The Assassination of Gianni Versace: American Crime Story is the tragic true story of Andrew Cunanan, the man who murdered the iconic Italian designer as well as five other victims. 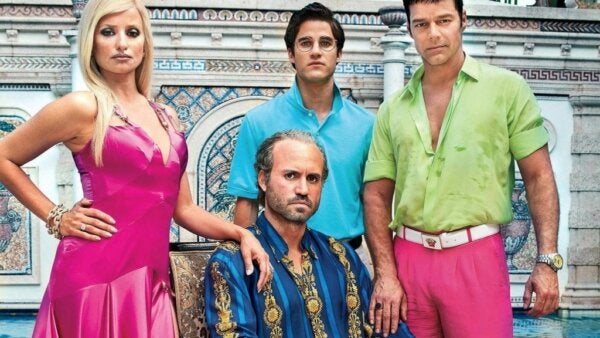 From the makers of American Horror Story comes a second crime series, American Crime Story. This time, however, the series doesn’t deal with the supernatural. The horror in this series is real. Its second season, The Assassination of Gianni Versace, generated a lot of discussion, which isn’t surprising considering the plotline. Exploring the murder of one of the most important fashion designers in the world is bound to cause some controversy.

Ryan Murphy, one of the creators of the series, developed an interest in anthologies and famous true stories, as we saw in FEUD: Bette and Joan. However, this work didn’t receive many positive reviews. Versace’s family apparently wasn’t very happy with the series and labeled it pure fiction.

The series, however, doesn’t focus on Versace himself. The main plotline is about his murderer, Andrew Cunanan. The show constantly reminds viewers that Versace wasn’t his only victim. There were four others, but since they didn’t enjoy the Italian designer’s fame, their names have been lost to the annals of time.

When something is “based on a true story”, it’s important to highlight the words “based on”. In other words, the creator includes facts, but will always take some creative license with the truth.

The series is aesthetically pleasing. The creative team designed the set perfectly, so you have the sense that you’re seeing Gianni Versace’s real world.

It’s a homage to 90s fashion and revives some of his most famous designs. You’ll enjoy the colorful luxury of his signature style.

The structure of the series is possibly its most interesting element. It moves back and forth in time, slowing unpacking the complexity of Andrew Cunanan.

The Assassination of Gianni Versace starts in media res, that is, in the middle of the plot. It opens a few hours after the murder of Versace. The murders appear in reverse order. The show starts with the last murder and ends with the root of the tragedy: Cunanan’s childhood.

“In the past, people were born royal. Nowadays, royalty comes from what people do.”

We’re not going to get into the discussion about what’s true and what’s fiction. The series is based on true research and events, but that’s just a starting point. What it becomes is something completely independent from the “real” story.

In the show, we meet Andrew Cunanan, a young man in denial about his money problems. Cunanan is a fascinating character, and the show reveals information about his life and personality one tantalizing bit at a time.

His past largely remains a mystery almost until the end of the series. By then, you already hate him so much that it seems there’s absolutely no justification for his atrocious behavior.

There’s no doubt he was guilty, and there’s no excuse for what he did. Understanding his past, however, does help explain why he did what he did. Cunanan’s father was an ambitious man, hungry for power and money, and he’d do anything to make his American dream come too. As an immigrant, he saw humanity’s darkest side and wanted to show the world that he could be somebody.

His mother, on the other hand, was basically worthless, as were Andrew’s brothers. Cunanan’s father placed all his hope in his youngest son and raised him to be a ruthless shark whose ambition would take him places.

His plans were cut short, however, when he was caught scamming and the FBI put out a warrant for his arrest. He fled to the Philippines, leaving his entire family behind. Young Andrew, however, couldn’t accept this difficult new life. Hard work and struggle just weren’t for him.

Cunanan had known a life with success and money and he wasn’t willing to give it up. Thus, he became a soulless monster who was willing to tell any lies to get what he wanted.

His web of lies became so big and so complicated that he resorted to murder to keep everything from falling down around him. He eliminated his rivals without a second thought. Drugs, prostitution, and luxury became a way of life.

A very disturbing scene in the series subtly but convincingly suggests that Cunanan’s father sexually abused him.

Cunanan grew up believing he was special and different from other people. He was envious of anyone who was “above” him or questioned his claims. His trauma and jealousy led him to end the lives of Jeffrey Trail, David J. Madson, Lee Miglin, William Reese, and Gianni Versace.

Cunanan murdered these men in cold blood. He knew Trail, Madson, and Miglin prior to killing them, but killed Reese because he wanted to steal his car. Versace, obviously, was a gay icon of the 90s. Hate, envy, and an insatiable desire to be the center of everything turned Cunanan into a ruthless killer.

Cunanan was gay but he seemed to hate – or envy – successful gay men. The difference between Cunanan and those men wasn’t just their fame, but also work and sacrifice. Over the course of the show, all the successful men that our protagonist meets tell him that their achievements are the fruit of hard work, a fact that doesn’t interest Andrew in the least.

The series is a pretty faithful portrayal of what it was like to be gay in the 90s. While the 90s don’t seem that long ago, the world has changed a lot since then.

In most countries, gay marriage was illegal. While that’s still the case in many countries, humanity has made some progress on that particular issue.

Homophobia is still a problem, but those kinds of attitudes are becoming less and less socially acceptable. In the 90s, unless you were a powerful man like Versace, being gay was extremely difficult. You can clearly see that in the series, especially during the interrogation of one of the last men to be seen with Cunanan.

During the interrogation, the questions perfectly illustrate the invisibility of the LGBTQ community. “Let’s imagine what it would be like to have so much money and power that it didn’t matter if you were gay. The other cops didn’t look hard enough for him, right? Why would that be? Because he killed some gay nobodies?”

Cunanan was one of the FBI’s most wanted for a long time, but it wasn’t until the murder of Versace that he became a household name. Finally, he had achieved the fame he so desperately wanted, though not in the way he had imagined.

The death of the Italian designer rocked the fashion world and public opinion, but Cunanan’s other murders were largely forgotten.

The reality of being gay in the 90s

The Assassination of Gianni Versace immerses viewers in the world of 90s gay culture. Because society largely excluded them, gay people at the time were forced underground with little opportunity to express their true selves.

Versace was a true revolutionary in the world of fashion and one of the first to come out and live openly as a gay man. Unfortunately, homosexuality was, until very recently, a label that meant you couldn’t live a normal life, even if you had power and money.

The way the series deals with the Cunanan’s other murders drives that criticism home. The murder of any human being is a tragedy and should be treated as such, no matter if they’re rich or poor, famous or not, gay or straight. Unfortunately, these inequalities also manifest themselves in death.

The Assassination of Gianni Versace: American Crime Story ends with an image of Donatella standing in front of her brother’s elaborate and opulent grave. At the same time, you see an image of Cunanan’s plain, small gravestone.

You don’t see the graves of the other victims, but they’re probably nothing like Versace’s or any other grave depicted in the series. These were ordinary people, remembered by their families and loved ones and forgotten by society.

The series won two Golden Globes. One for Best Miniseries, and another for Best Supporting Actor (Darren Criss, who played Andrew Cunanan).

The Assassination of Gianni Versace should maybe have another title. After all, it goes beyond the death of the designer and explores the tragedy of Cunanan’s life and crimes and the five families he destroyed.

“Don’t be into trends. Don’t make fashion own you, but you decide what you are, what you want to express by the way you dress and the way to live.”

What Happened to Baby Jane? When Hate Turns into Art
Bette Davis and Joan Crawford were two talented, famous actresses who had a lifelong feud. The movie Baby Jane used this feud and become a true work of art. Read more »
Link copied!
Interesting Articles
Cinema, Television, and Psychology
The Man with No Name: The Reinvention of a Genre