The Amygdala and Anxiety: What's the Link?

Neuroscientists call the neurological structures that mediate anxiety disorders the "web of fear". Out of all these areas, the most relevant is the brain's amygdala: a region as small as a marble. 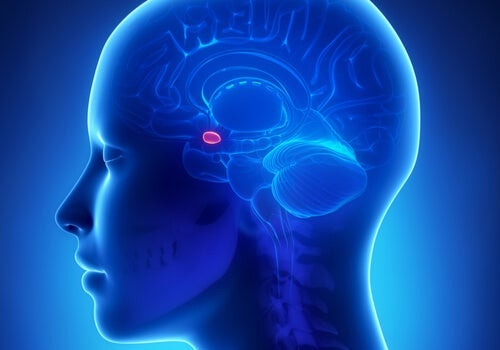 There’s a direct relationship between the amygdala and anxiety disorders. This is a fact that’s been known for a long time. However, in addition to this fact, there’s another that’s as curious as it is striking. Neuroscientists have discovered that some people have a larger amygdala and that this increases the risk of mood disorders.

Is this perhaps a coincidence? Can one really be born with such a neurological disorder? Research is showing us that, in reality, this peculiarity is due, above all, to a very specific factor. This factor is none other than the suffering caused by a difficult childhood, subject to constant stress, whether due to mistreatment, physical abandonment, or emotional neglect.

In other words, your previous experiences, and how they affected you, model your brain’s architecture. Moreover, it does so in a very unique way: if you suffer stress in childhood, it alters all that neurobiology related to what scientists call the “web of fear”.

Regions such as the amygdala, the hippocampus, or the anterior dorsal cingulate cortex suffer small alterations that will increase the risk of suffering anxiety disorders in adulthood.

The amygdala and anxiety: what’s the connection?

We all experience anxiety throughout our lives, with varying degrees of intensity. Stressful situations that you go through, such as facing a job interview, exams, or a conference that you have to speak at, put you through the mill. They create fear, uncertainty, or anxiety about what’s going to happen and whether you’re going to do well.

These experiences, however complex they may seem to you, are completely normal. However, it isn’t normal to suffer constant anxiety.

Sometimes, there’s no specific trigger. You can feel a permanent sense of anxiety that you can’t explain, and that alters your entire reality, both physically and psychologically. This anxiety is pathological and acts like a poison that affects your health and potential.

Psychological conditions such as phobias, post-traumatic stress disorder, and generalized anxiety disorder, can affect you and are linked to anxiety. Because of this, neuroscientists have wondered for decades what actually happens in the human brain and what brain structures cause this anxiety.

The “web of fear” and the amygdala

Anxiety isn’t the result of the activity of just one brain structure. In fact, it’s the result of a complex combination of several areas of the brain. This makes up what scientists refer to as the “web of fear”. The name alone is scary enough, but what is it exactly?

To understand it better, we’ll start by explaining that the human brain is both emotional and rational. It has some very old areas that articulate and dominate the processes that are linked to your sensations, emotions, and feelings. Specifically, the frontal areas of the cerebral cortex control the cognitive and more reflexive processes.

When someone experiences an anxiety disorder, their brain is taken over by fear. We could say that the brain is “hijacked” by a series of structures that limit its more logical and reflective thinking.

Moreover, the part of your brain that orchestrates this control is the amygdala. This fact was discovered in the 90s, thanks to a study conducted at Yale University by Dr. Michael Davies.

Alterations in the amygdala due to a stressful childhood

In 2013, Stanford University made a great discovery. Professor of Psychiatry Dr. Vinod Menon discovered through MRI scans that some people had a larger than average amygdala. These people also had other correlating factors.

The first was that many of them suffered from anxiety disorders. The second was that they had experienced a traumatic or, at least, stressful childhood due to factors such as abandonment or emotional neglect, among others.

Therefore, it seems that having a larger amygdala causes alterations in the connections between other regions of the brain responsible for the perception and regulation of emotions.

This creates hyperactivity, and the cerebral amygdala becomes more sensitive and finds it more difficult to regulate fear, anguish, anxiety, and the feeling of threat, among others. However, Dr. Menon insists on one fact: experiencing a difficult childhood won’t necessarily mean that a person will suffer from mood disorders in adulthood. However, there’s a risk and a greater probability.

Knowing this, science is focusing on regulating the activity of the amygdala. Something like this could give us new and valuable tools to help us treat anxiety, a condition that, as you well know, is very common nowadays.

Brain delta waves are mysterious and fascinating. Grey Walter discovered they existed back in the early 20th century. These waves…