The 8 Life Stages According to Erikson

Erikson was a pioneer in considering that the development of the self is a lifelong process. He understood our development as a succession of eight life stages that manifest themselves throughout the life cycle. 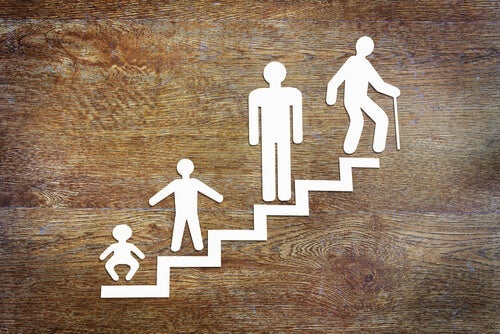 Within the psychoanalytic field, we can find authors who follow the assumptions of Freud’s psychoanalysis in an orthodox way and others who modify these postulates in some way. Erik H. Erikson was one of the latter, as he expanded and modified Freudian theory. He emphasized the influence of society on the developing personality and didn’t consider the family environment as responsible in a unitary way. Also, he put forward eight life stages, which we’ll talk about in this article.

In his genetic model, Freud considered a succession of stages through which each person would pass from birth to adulthood. He called this succession of stages “phases of psychosexual development“. For psychoanalysis, sexuality is a dimension of utmost importance, as it constitutes one of the main sources of vital energy that influences human behavior.

Freud called this vital energy libido, which had to be repressed and removed from consciousness in order not to provoke any conflict.

Erikson, for his part, doesn’t attach the same importance to psychosexual development as his predecessor did. He focused more on the role of social influence in explaining the evolution of the human psyche. Because of this, he developed phases of psychosocial development.

At each vital stage, a crisis manifests that the person must overcome in order to move on to the next stage.

Erikson was a pioneer in considering that the development of the self is a lifelong process. He understood development as a succession of eight stages that manifest themselves throughout the human life cycle. At each stage, the individual has to:

If the person doesn’t resolve the crises, then they won’t develop successfully. So, according to Erikson, it’s necessary to successfully complete one stage in order to correctly move on to the next one. These are Erikson’s eight stages:

The strength of the ego

As we’ve just seen, Erikson proposes that we need to resolve every crisis that arises in the different life stages of our development. By resolving each conflict, the person will grow emotionally and psychologically. However, not only is it important to resolve the conflicts that arise, but it’s also essential to acquire the skills that will help us deal with these conflicts.

If we acquire these skills, thanks to our social agents, and are able to solve all the crises that arise, then we should be free of any psychopathologies. However, it’s important to remember that, if we don’t succeed, then we may get stuck in some of them and won’t be able to develop correctly.

When we acquire the necessary skills, we’ll experience a rewarding sense of mastery, called ego strength.

Erik Erikson, A Different Kind of Psychoanalyst
Erik Erikson was a German psychoanalyst who made important contributions to our understanding of the human mind. Read on to find out more! Read more »

Link copied!
Interesting Articles
Theories
Is Consciousness a Product of the Brain?