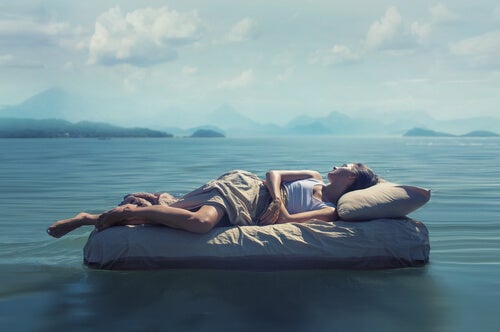 Why do we sleep? Why do we spend at least a third of our lives doing something that happens so quickly? Many studies on sleep stages have been done to shed light on these two questions.

Sleep is a very important behavior in our life. We have an urgent need to sleep that forces us to look for a quiet, warm and comfortable place to be for several hours. Its function seems to be very important. Because if we don’t sleep, our body begins to insist that we sleep.

Studies show us that if we do a lot of physical exercise, our sleep doesn’t change. But after intense mental activity, our body needs more sleep. This is because sleep’s main function is to allow the brain to rest and recover from mental activity during the day.

It is so important that the brain gets rest that if this process does not take place, we know from studies with animals that we would die. Now, sleep is structured in a series of phases that we will explain next. Let’s delve into the five sleep stages.

Sleep is divided into five phases written as I to IV, as well as REM sleep. They go in order until reaching the REM phase. Later, during the night, periods of non-REM sleep alternate with periods of REM sleep. Each of these cycles lasts approximately 90 minutes. Therefore, we complete about four or five cycles in an eight-hour sleep period.

The sleep stages were discovered through the numerous studies in sleep laboratories. They can be distinguished by the mental activity recorded in an EEG (electroencephalography) and by various physical measurements. Below, we will talk in detail about what happens in each of these sleep stages.

Phase I of sleep

This is when a person closes their eyes and notices that feeling of falling asleep. Here, a person is conscious and capable of reacting to stimuli in their environment. It is actually a transition phase between wakefulness and sleep.

Physiologically, this stage has theta brain waves. This means that EEG activity begins to be synchronized. Although it is still irregular, it is not as irregular as brain activity during wakefulness. If we observe a person’s eyes in this phase, we can see how they open and close from time to time, and how they move up and down.

After 10 minutes in phase I, the sleeping person enters phase II. They are now deeply asleep. But if a person is awakened in this phase, they will not remember having slept. They will insist that they have been awake that whole time. It is a preparatory phase for the true restorative sleep of phases III and IV.

Physiologically, there is an irregular EEG with episodes of theta waves. If you hear something in this phase, a brain wave called the K complex appears. This wave may inhibit the sound, keeping the person from waking up.

After 15 minutes in phase II, the individual begins phase III. This is the state where restorative rest really occurs. Phase III and IV are quite similar; there is simply a change in the depth of sleep and its effectiveness.

In this phase, we find a slow wave EEG. This means that brain activity is highly synchronized and relaxed. There is a lot of inhibitory neuronal activity, which are to prevent the subject from waking up. This stage is also very important for consolidation processes of memory and learning.

The REM phase comes after about 45 min in slow wave sleep. It is the opposite of the other phases, in that it is a vigilant state. Brain activity is desynchronized and accelerated. Despite being difficult to wake a person up in this phase, significant stimulus (such as saying their name) will awaken them. It is far less deep than the slow wave sleep.

In this phase, we find that a person’s eyes move quickly in all directions (hence its name). And there is a marked loss of muscle tone; the person is paralyzed. This paralysis is due to the fact that we dream during the REM phase. The muscles disconnect to avoid acting out the dream.

Another curious fact about the REM phase is that genital activity appears in the form of vaginal lubrication in women and erection of the penis in men, without sexual arousal. This characteristic of REM sleep has been used in the clinical field to distinguish whether the causes of a sexual impotence are psychological or physiological.

The function of the REM phase is not yet clear. It is an important stage, because when we prevent a person from going through this phase, the body tries to compensate for it in future sleep. Studies point to it being related to the consolidation of memory and learning. But even so, there is still much to discover about this paradoxical sleep phase.

How much Time Can a Person Go without Sleep?
Sleeping is not only a pleasure, but also a necessity. Both the act of falling asleep and of dreaming have been mysteries for human beings for as long as we have existed. None of our functions stop sleeping, except our consciousness. The rest of the body is still active, as well as the mind. Read more »

All of Milan Kundera's quotes are works of art. Most of them are part of his wonderful and extensive literary…

Culture
The Smartphone Zombie: Staring at Your Phone While You Walk

A smartphone zombie is someone who stares at their phone while they're walking down a street. Focusing entirely on your…