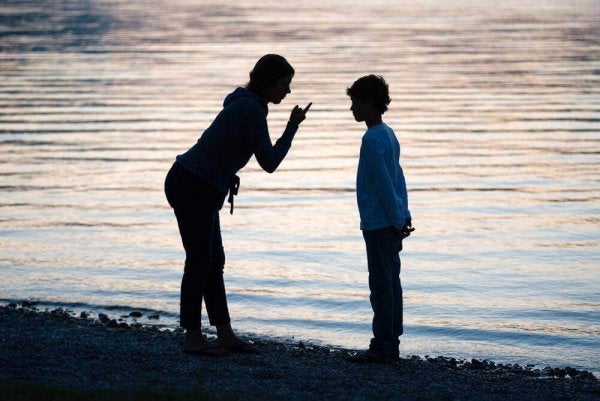 The double bind theory was developed by anthropologist Gregory Bateson and his research team in Palo Alto, California (1956). It’s framed through a systemic perspective and it talks about all the situations where you communicate with someone and receive conflicting messages.

They came up with this theory to try to explain the psychological roots of schizophrenia, leaving aside theories related to brain dysfunction and the body itself. The sad truth is that schizophrenia is still one of the most puzzling mental illnesses out there. In fact, there are plenty of theories about how it originates. Some of them are biological, and others say it has social roots. Now we’re going to delve deeper and give you a better idea of what the double bind theory is.

A short biography of Gregory Bateson

Gregory Bateson was born in Grantchester, England on May 9th, 1904. He was an anthropologist, social scientist, linguist, and cyberneticist who had an impact on a lot of other intellectual fields. Some of his most notable ideas show up in his books Steps to an Ecology of Mind (1972), Mind and Nature: A Necessary Unity (1979), and Angels Fear: Towards an Epistemology of the Sacred (1987).

Bateson and his collaborators, people like Jay Haley, Donald Jackson, and John Weakland, were pioneers in developing the systemic perspective. Certain academic circles see him as a cult figure, fascinating due to his dark, eccentric personality and the many things he accomplished. But the growing interest in holism, systems, and cybernetics has also lead to a natural push for educators and students to publish his work.

To Bateson, communication was what made human relationships possible. In other words, it acted like a support beam. In his view, that included every single process in which one person influences another. When you look at it this way, the media sticks out as a major component of our social structure, one we definitely need to analyze.

Bateson said that we have to get rid of the double bind that occasionally comes up in communication. He also said that you constantly see it happening on TV. For example, one show will praise a certain moral value, and then another will go against it. What this does is create conflicts in the viewer’s mind. This is even truer if they’re children or people without a developed capacity for critical thinking.

What is a double bind?

According to Bateson, a double bind is a communication dilemma that comes from a conflict between two or more messages. So it doesn’t matter what you do, because any choice you make will be wrong. This is a situation in which communication only causes suffering and can even lead to psychological disorders.

We’re going to try to explain it better with an example. A child tries to interact with their mother, who has trouble being affectionate. She shows how much she loves her child, but only with her body language. The child only sees signs of rejection. The verbal message the mother sends to her child doesn’t line up with the message her body sends. In the end, the child finds themselves trapped in a conflict between affection and rejection.

The double bind theory is based on an analysis of communication, more specifically on Russell’s theory of logical types. Using that theory and their observations of schizophrenic patients, they came to the idea of the “double bind”. As you’ve seen, no matter what you do in a double bind situation, you just can’t win.

Bateson said that a person wh0’s constantly in a double bind can end up developing schizophrenic symptoms. The central idea of the double bind theory is that there’s a gap between one group and its members because the group can’t be a member of itself. The members can’t be part of the group either, because the word they use for it only exists on an abstract level.

When it comes to real communication, the gap (or breakdown) is constantly, unavoidably present. Along those lines, this also happens in the human body when the communication gap is between mother and child. This can sometimes lead to what we now call schizophrenia, a very serious psychotic mental disorder. One of its main characteristics is that it can change the way you think and use language.

The necessary ingredients for a double bind to appear

Here are the ingredients that have to be present for a double bind scenario to appear:

According to the double bind theory, this group of ingredients stops being necessary once the victim has learned to see the universe through the lens of the double bind. Just about any part of the sequence above could be enough to lead to a panic attack or an outburst of anger.

The effect of a double bind

The double bind’s effect shows up in a collapse of the victim’s ability to differentiate between logical types and ways of communication. This happens any time they feel like they’re in a double bind situation. Here are a few general characteristics that can make this happen:

Bateson, Gregory (1972). Steps to an Ecology of Mind: Collected Essays in Anthropology, Psychiatry, Evolution, and Epistemology.

Paranoid Schizophrenia: Definition, Causes and Treatment
Surely on more than one occasion you've heard someone say "they're paranoid". It is not uncommon for us to use the term "paranoid" for someone who things someone is following them, who wants to hurt them, who makes fun of them or who is against them. Read more »
Link copied!
Interesting Articles
Psychology
Hippocrates and the Theory of the Four Humors

Interesting Articles
Educational Psychology
Why is Scaffolding in Education Important?