Test anxiety is quite common among students. Read on to learn all about it! 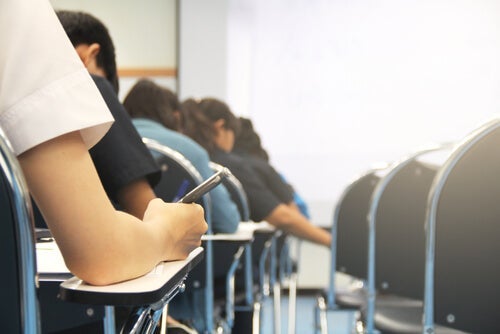 Test anxiety is an irrational, persistent and very intense fear of exams. Do you have this problem? Do you know someone who does? If so, you should definitely read this article, as we’ll tell you all about this phobia. Once you’re done, you’ll be able to recognize its symptoms and the most frequent treatments.

This is a specific phobia without a clinical category of its own. Nevertheless, it’s still important. This is because it makes it hard for a person to advance in their personal life and professional career. Although it usually manifests at the beginning of adulthood, it also affects children.

Furthermore, it doesn’t only affect students. Thus, it also affects other people, such as athletes in competitions, people trying to get a driver’s license, actors, and professionals who must teach a class or give a lecture, among others. In other words, it can affect anyone who anticipates an external evaluation. Continue reading to find out how to deal with this phobia.

The reaction that triggers previously or at the time of the evaluation is basically an anxiety attack, which can even be severe. Thus, the symptoms of test anxiety can even trigger a panic attack. This is because the sympathetic nervous system activates and leads to involuntary motor reactions.

The most common and characteristic symptoms are dizziness, tachycardia, sweating, choking sensation, palpitations, increased blood pressure, gastrointestinal problems, and severe discomfort that can make a person believe they’re having a stroke or a heart attack. Even worse, they often feel like they’re about to die.

These symptoms aren’t only triggered at the test site. In fact, any aspect that’s related to the evaluation can trigger them, such as the library where they studied for the test, the proctor, and the materials to be used, among others.

A phobia is an intense fear in response to the anticipation of danger, even if it’s unlikely or negligible in objective terms. In this case, failure in similar assessment situations can enhance the person’s fear. Also, the sufferer may be afraid of failure or the expectations in their environment are very high.

This phobia usually manifests at the adult stage, even if it derives from childhood.

There’s a treatment for phobias. It’s comprised of various strategies that help a person reduce the fear, anxiety, and discomfort that trigger their anxiety each time they have to face the situation that causes it.

The most widely used method of exposure is repeatedly confronting the feared stimulus, in a controlled manner, until the intensity of their fear decreases and they can control it.

Normally, the exposure is gradual and seeks to break the associations that are at the root of fear. One of these stimuli could be, for example, the classroom where they’re going to take the exam or simple exam sheets.

Anxiety also plays an important role. Therefore, if you learn to relax, you’ll be able to focus on the test. However, it’s also a good idea to incorporate tools that’ll help you work with elements associated with your phobia.

Taking a Test: Keys that Will Help You Prepare
Taking a test, in many cases, is a stressful experience. Discover some keys that may help you prepare for it in this article! Read more »
Link copied!
Interesting Articles
Clinical Psychology
Klüver–Bucy Syndrome: The Loss of Fear