Teenagers and Sleep: Why Do They Need so Much of It?

Just as some people can't help but get up early in the morning, others can sleep for most of the day. This happens a lot in adolescence. But why? 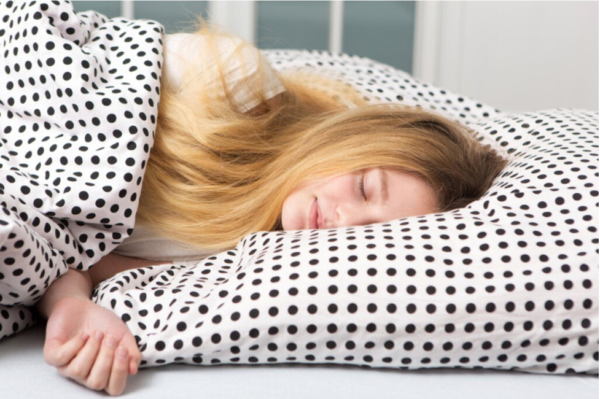 For many parents, sleeping until midday equals laziness and sloppiness. They wonder why teenagers sleep so much; they think it means they have no ambitions and are throwing their life away. Furthermore, it’s often linked with other behavior that young people display. For example, not tidying up their room.

Laziness is something that can make parents pretty angry. Even more so when their children moan if they try to get them up before noon. With their hair uncombed and pillow marks still on their face, teenagers slouch over the table to eat with their family and are moody and irritable.

What many parents don’t know is that sleeping more than usual is absolutely normal in teenagers. Documentation proves that it forms part of a series of imbalances in this particular period of life.

Hormonal increases alter the sleep cycle in the adolescent male, among other changes. Their brain is reprogrammed at approximately age 11 or 12, and the testosterone receptors modify their circadian rhythm. This makes the teenager go to bed later and get up later. Thus, sleeping until noon isn’t a matter of rebellion or even choice but of the body’s hormonal activity.

As well as hormones, another contributor to the alteration of the circadian rhythm is the use and abuse of technology. There are already numerous studies on the use of cyber technology regarding computer and console games. Teens spend a lot of time playing on them. Furthermore, these games are known to cause conditions that can range from addiction to attention deficit disorders.

After school and homework, teenagers often stay up late into the night in their cyberspace world. And in some schools, pupils have to start early in the morning. Thus, this means they’re only getting a few hours of sleep a night (about six hours). However, at this stage of their growth, they require at least ten hours.

This would suggest that, since teenagers tend to get up later (due to their chronobiology, not their computer usage), schools should start classes later to make learning more effective.

Computer games are exciting and competitive with lots of color and action. They encourage the teenager to continue on and on until they either defeat their opponent or pass levels. In a nutshell, this kind of technology accelerates adrenaline, cortisol, and dopamine. Together, they provide a shot of power, energy, and pleasure.

Adrenaline accelerates your reflexes and allows rapid reactions. Cortisol keeps you awake and active. And dopamine affects the way in which you seek pleasure and rewards.

These computer games are played under artificial light. This decreases the amount of melatonin, which is essential for inducing sleep. Therefore, this is why teenagers don’t feel the need to go to sleep when they should.

As well as all of this, there’s something else to remember. Teenagers, regardless of gender, don’t know their own boundaries. Thus, it’s quite common for them not to realize when they should stop playing or surf the internet to take a rest.

Parents should set their children boundaries and guidelines. Furthermore, they should tell their children how video-game consoles and computers can be safely used.

Just like testosterone in boys, estrogen in girls shakes up their emotions, cognition, and body in various ways, including their sleep. Estrogen receptors are activated in brain cells, acting on the suprachiasmatic nucleus. These receptors organize the rhythms of hormones, mood, sleep, and temperature.

Estrogen not only influences the brain cells that control breathing. It also activates the rhythm of sleep and growth hormones in females. Girls begin to change their sleep patterns between the ages of eight and ten.

Sleep regulation and the pineal gland

The suprachiasmatic nucleus is the center that regulates the circadian rhythm with melatonin via the pineal gland. The pineal gland is a group of neurons from the medial hypothalamus.

The suprachiasmatic nucleus forms your inner or endogenous clock. This receives information about ambient light through the eyes, more specifically the retina. The retina contains photoreceptors that distinguish shapes and colors. It also contains ganglion cells, which contain a pigment called melanopsin. And these carry information to the suprachiasmatic nucleus through the retinohypothalamic tract.

The suprachiasmatic nucleus takes this information about the external light-dark cycle. It then interprets it and sends it to the upper cervical ganglion. From there, the signal is redirected to the pineal gland that secretes the hormone melatonin in response. Melatonin secretion is low during the day and increases at night.

Serotonin is the precursor hormone of melatonin. Serotonin is a neurohormone of well-being and relaxation. Thus, if you’re relaxed and happy at the end of the evening, the melatonin will be given a better reception.

On the other hand, if you’re in a stressful situation, cortisol will make it difficult for you to go to sleep. This is because cortisol has the opposite effect of serotonin and will slow the production of melatonin. Therefore, when teenagers get excited about their video games, cortisol stops them from sleeping.

Brain waves and sleep between childhood and adolescence

Research shows that, at age nine, girls’ and boys’ brainwaves are identical during sleep. However, by the age of 12, girls have changed their sleep brainwaves by 37% in comparison to boys (Brizendine, 2006).

Scientists concluded that girls’ brains evolve faster than boys’ brains. Campbell points out that the extra synapses in the girls’ brains are reduced earlier than in boys. This makes their brain circuits mature faster.

Another important detail is what sleep specialists call circadian rhythms. They’re connected with the effect of cortisol in the body.

Sleeping until noon or later isn’t always due to laziness

Taking this into account, you can see that not always laziness makes teenagers sleep until midday or later. Indeed, there are biological issues at play here that can’t be avoided.

However, leaving aside the owls and larks issue, obviously, some teenagers are simply lazy and irresponsible. Consequently, not everything can be attributed to hormonal interference, owl rhythms, or late-night technology usage.

Therefore, it’s really important to consider each situation individually. Depending on the cause, the parents can decide whether or not to set limits on the child’s use of technology.

Sleeping until noon isn’t a teenage crime, even less so if it only happens occasionally. However, if it happens continuously, you have to find out the cause and take the appropriate steps to resolve it.

Lack of Sleep and its Consequences
Lack of sleep is common in teenagers and adults. In a world saturated by instant gratification, basic needs such as sleeping are often on a second plane. Read more »
Link copied!
Interesting Articles
Behavioural Biology
The Neuroscience of Revenge