Teenagers and Risky Behavior: Why They Do It

French anthropologist David Le Breton says that roughly 15% of teenagers engage in risky behavior. One interesting thing about that number is that it's the same all over the world. 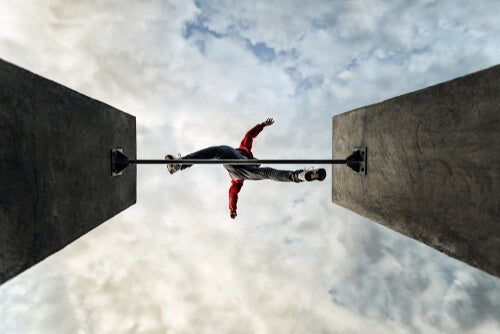 French anthropologist David Le Breton has spent a long time studying teenagers and risky behavior. He’s done it through a humanist lens, taking into account factors such as emptiness and social pressure in the modern world.

Risky behaviors are essentially when a person voluntarily and repeatedly puts themselves in a dangerous situation. When we say dangerous, we mean that it could jeopardize their physical or mental health or even their life.

Adolescence seems to be an especially common time for this. Teenagers engage in many forms of risky behavior. To give just a few examples, there’s unprotected sex, “extreme sports”, dares, and many forms of suicidal behavior such as driving at extremely high speeds, going to dangerous places, or hanging out with dangerous people.

“The young always have the same problem- how to rebel and conform at the same time. They have now solved this by defying their parents and copying one another.”

Many teenagers who engage in risky behavior say that they’re looking for experiences that will give them adrenaline and allow them to experience intense emotions. The idea here is that it makes them feel more alive. To them, this is what it means to “live life intensely”.

There are countless news stories every year about teenagers who died due to risky behaviors. We’re talking about things such as drinking a bottle of tequila really fast or jumping into a pool from a roof. Some teenagers may even join gangs or hang out with people who do illegal things “for the experience”.

The evolution of risky behavior

Just a few decades ago, young people tended to channel that desire in another way. Like most things, risky behavior is also susceptible to current trends. According to anthropologist David Le Breton, this kind of behavior actually started to become more popular in the 1970s.

He considers drug addiction the first manifestation of risky behavior in that time period. Starting in the 1960s, young adults started to consume drugs. By the 1970s, they’d already become common practice. He also believes that the anorexia “epidemic” began towards the end of the 20th century.

In the 1990s, we started to see the first teenage mass shooters. Gang mentalities started to take deeper hold around this time as well. “Scarification”, or making incisions in your skin, also become popular in the 1990s. Tattoos and piercings were a painful but tolerated fashion trend.

There have been other risky behavior trends in recent years. For example, the sinister challenges people do on social media or people who contact and later join radical groups.

What’s going on with teenagers nowadays?

Le Breton says that we’re seeing more and riskier behaviors in teenagers for one fundamental reason: everyone is ultimately fighting for themselves. There’s a widespread decay of old institutions in our society. One of the main ones is family.

Similar things are happening with larger social institutions such as churches, schools, and political power. These social powers are no longer a reference point for younger generations.

Teenagers engage in risky behaviors to discover their limits and the boundary between what they find tolerable and intolerable. The problem is that they don’t always find that boundary.

When a young person doesn’t have models to follow, their relationship with the world has a very fragile foundation. They’ll begin a long quest in search of meaning, which frequently leads to these dangerous explorations.

Nowadays, although many young people grow up in the same home as their parents, they’re a world apart from them. Sure, parents don’t need to be by their side at all times but they do need to be in their children’s lives. Unfortunately, this isn’t always the case.

Adolescence – 7 Tips for Parents with Rebellious Teenagers
Adolescence is a difficult time, both for the teen and the parents. Read on to find some helpful advice to get you through these tricky years. Read more »
Link copied!
Interesting Articles
Educational Psychology
Sternberg's Triarchic Theory of Intelligence

Educational Psychology
Why Are Children Fascinated by Dinosaurs?

From diplodocus and triceratops to tyrannosaurus rex and velociraptors. Whatever the species, dinosaurs capture the imagination of children around the…

Many learning centers have abandoned the lecture format. Instead, they want students to leave the classroom with more than just theoretical knowledge. We're talking about places that teach children critical…