Teenage aggression is common and happens for many reasons. Today, we'll talk about how it relates to coping mechanisms and some strategies on how to prevent it. 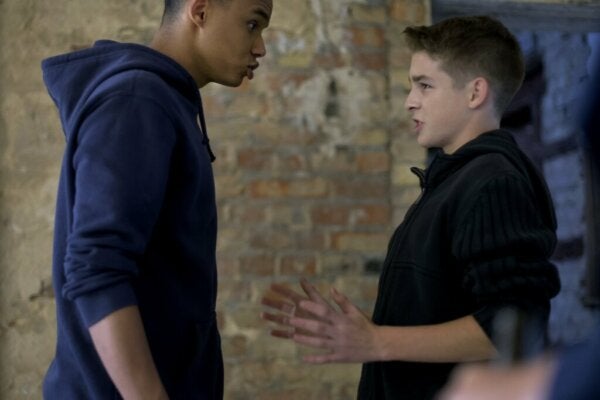 According to a study by Solis and Vidal (2006), which was published in the Hermilio Valdizan Psychiatry and Mental Health Journal, adolescence is a challenging stage of life that can trigger a lot of stress, whether from school issues, uncertainty about the future, and social pressure, among other issues. Consequently, teenage aggression is something that many parents and educators have to deal with every day.

There are many ways to be aggressive, and many are associated to each individual’s coping mechanisms. In this article, we’ll talk about the definition of aggression, focusing on adolescence as the critical period during which individuals develop their personality and acquire certain habits.

Osorio (2013) described aggression as one of the tactics of social competition, one of the normal skills in the human behavioral repertoire that are directed towards gaining the upper hand in conflict situations (in other words, wins/losses, victories/defeats).

Where do you draw the line between aggression and violence? Osorio argues that physical harm is what distinguishes the two. Behaving in an aggressive way doesn’t have to involve physical harm.

A study by Mestre et al. (2012) analyzed the relationship between adolescent coping mechanisms and emotions to determine how these processes relate to aggression.

Thus, teenage aggression and aggression during other stages of life are associated with an individual’s coping styles. Coping mechanisms are the strategies that you use when dealing with problems and adversity. A more aggressive individual is more likely to use maladaptive strategies.

Frydenberg, a specialist in coping mechanisms, focused on adolescence to develop her theory, which includes 18 different coping strategies. These are grouped into three coping styles:

Frydenberg (1997) argues that many of the risky behaviors that adolescents engage in, such as drug use, sexual promiscuity, violence, and aggression, is a result of their inability to deal with certain challenges or problems.

One important tool in preventing this kind of behavior is early emotional education. A democratic, positive, and respectful parenting style is also very beneficial.

A study by Del Barrio et al. (2009) attempted to lay the foundation for preventing aggression in children and teens through the information we have about the connection between child-rearing habits and aggression.

The study found that certain aspects of parenting are especially important for preventing aggressiveness in teens. They are:

As you can see, working on communication is essential to prevent teenage aggression. The same goes for younger children. Fostering assertive and open communication styles can prevent aggressiveness.

Remember that, in communication, aggression is one extreme, just like passivity. Being in the center is the very best option and that’s where assertiveness resides.

Aggression is very tempting for teens. The root causes are varied and include personality, an inability to appropriately deal with problems (a coping mechanism deficiency), family problems, conflict with peers, low frustration tolerance, an underdeveloped prefrontal cortex, etc.

The intensity and the way that aggression manifests itself can also vary. It can manifest as physical violence, verbal expression, aggressive communication, etc. As always, the best tool to fight aggression is prevention.

Accompanying teens at school, at home, or where they hang out and providing tools for them to work on their self-control and emotional regulation as some of the best strategies to avoid this behavior.

In conclusion, the most important thing is to offer them alternative coping strategies. For example, dialogue, reflection, breathing, and putting things into perspective. There are many ways for teens to redirect their emotions and avoid turning to aggression.

Putting People Down: A Subtle Form of Aggression
Putting people down is a form of symbolic elimination. Its victims can be an individual person, or an entire social group. Read more »
Link copied!
Interesting Articles
Psychology
There Are Years to Ask Questions and Years to Find Answers

Are you free to do what you wish? Do you feel like you need permission to have the life you…

Psychology
Balanced Thinking: a Perspective in Harmony with the World