Always connected, always available, always in multi-tasking mode. These attitudes can make you feel overwhelmed and stressed. This is what some experts are referring to as "technostress". In severe cases, it can even become an addiction. 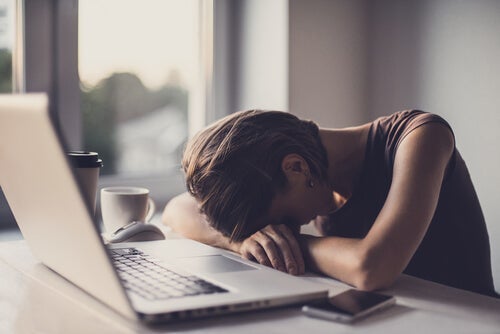 New technologies are resulting in changes at every level of society. These include not only social changes but also cultural and economic ones. There’s no doubt that they do provide a lot of benefits in terms of relationships and the spread of information. They also make your life much easier in general. However, the abuse of new technologies can sometimes lead to “technostress”.

Poorly managing the use of technology and losing track of the time you spend using it can cause a lot of problems. Some of these are nomophobia, the “FOMO” syndrome, and technostress. In this article, we’ll be talking about technostress.

“It has become appallingly obvious that our technology has exceeded our humanity.”

In 1984, Craig Brod defined this phenomenon for the first time. He said it was “a modern disease of adaptation caused by an inability to cope with the new computer technologies in a healthy manner”.

In 1997, Larry Rosen and Michele Well popularized the term through their book Technostress: Coping with Technology @Work @Home @Play. In this book, the authors explain that technostress is one of the negative impacts of technology. It could have this effect directly or indirectly in an individual’s attitudes, thoughts, physiology, or behavior.

As you can see, technostress is a negative psychological state related to the use of technology. In fact, according to psychologist Marisa Salanova, it occurs due to the perception of a lack of balance between the demands and the resources of the use of technology. In turn, this leads to a feeling of discomfort, as well as negative attitudes and high levels of psycho-physiological activation.

Thus, technostress is the product of poor technology management, along with other factors such as poor self-control levels and low frustration tolerance.

The causes of this condition

In general, the causes of technostress are related to the age and the generation to which the person in question belongs to. Some of them are:

Nevertheless, being physiologically and sensorially active for long periods of time can lead to harmful physical and mental health consequences. It’s no surprise that these consequences may interfere with a person’s normal functioning.

So how does this addiction develop?

Why are new technologies so attractive?

According to many opinions, this attraction is based on the way in which these technologies present us with stimulation. The fast gratification and the overloading of stimulation that constantly changes can activate the brain’s reward centers.

As such, this constant stimulation can, at least at first, provide you with pleasure and take complete hold of your attention. That’s why technology is so attractive to people in general. It’s also what makes it difficult to cut them out of your life.

In particularly serious cases, the best thing is to seek out the help of a psychotherapist. In particular, exposure with response prevention – a behavioral strategy that tends to be beneficial for treating addictions – may be especially useful. Aside from that, experts generally recommend the following for less severe cases:

It’s evident that, in some ways, new technologies have been good for human beings. Rather than condemning them, we can congratulate ourselves on our progress. It’s also worth mentioning that they’ve opened the world up.

Nevertheless, it’s extremely important to behave rationally in your use of these technologies. Also, you should never place the use of technology above human interaction.

Have You Heard of Snoezelen Multi-Sensory Stimulation Rooms?
You might've heard about Snoezelen rooms before. They're based on a concept of multi-sensory stimulation are part of a revolutionary new form of therapy. Read more »
Link copied!
Interesting Articles
Treatments
How Do Opioid Analgesics Work?

Esketamine is an innovative drug with decent prospects in the treatment of depression, especially in those cases that are unresponsive…