Human beings are social creatures, there's no doubt about that. Sociologist Randall Collins says we engage in social behavior so that we can get emotional energy, which then fuels us for further interaction. But what do those interaction rituals look like? Keep reading to find out more. 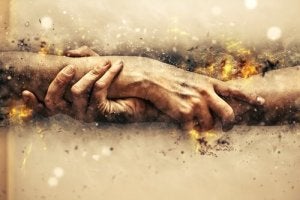 According to Collins, rituals are mechanisms that focus attention on an emotion which creates a shared reality. This new reality is temporary, but it helps generate meanings and symbols.

When you read the word “ritual,” you might think of an elaborate ceremony of some kind. However, in this context, rituals or interaction rituals can be something as simple as greeting someone on the street.

Saying “Hey, what’s up?” to someone on the street creates a new reality between you and the person you are greeting. It might only last for a few seconds, but that’s enough to generate symbols and, lastly, emotional energy.

The emotional energy that this ritual creates will lead you to greet this person every time you see them. On the other hand, if you don’t get any emotional energy from this interaction, you’ll stop doing it. So these interaction rituals are all connected. As long as your ritual keeps giving you the desired results, you’ll keep repeating it.

The elements of a ritual

Interaction rituals have four primary elements or conditions. They are:

The last two elements are the most important, and they reinforce each other. Participants in a religious service all adopt a respectful and solemn attitude, for example. Funeralgoers might all feel that their grief is shared by everyone present.

On a smaller scale, the same happens in something like a conversation. If you are having a very interesting chat with someone and you become more and more engaged, the rhythm and emotional tone of the dialogue ensnares the speakers. Durkheim called this state of shared emotion and attention “collective conscious.”

Effects of the ritual

If the elements combine properly and there are high levels of overlap in the focus of attention and shared emotion, the participants could experience the following:

In conclusion, these interaction rituals with other people motivate your actions. From this perspective, relating to other people is beneficial, especially when the aforementioned conditions are present. This all is another example of our nature as social beings.

It also illustrates how social media, in spite of the fact that it keeps us in touch with each other, does not fulfill our need for social interaction. Above all, there is no substitute for face-to-face contact with other human beings.

5 Rituals to Beat Anxiety
Anxiety is a terrible enemy. How can we deal with it? Read on and discover 5 rituals that will help you to beat anxiety whenever it comes to attack you. Read more »
Link copied!
Interesting Articles
Family
Becoming a Father Can Trigger Hormonal Changes

When we get into the subject of sexual desire, a number of stereotypical categories arise. But what characterizes sexual desire?…

Human Relationships
The Four Principles of Attraction According to H. T. Reis

According to psychologist and professor H. T. Reis, many studies and literature make it possible to establish four principles of…