All of a Sudden, You Came Along: A Story About Falling in Love

He's been secretly loving her for years. What he doesn't know is what will happen after he meets her. What he least expected was to find out that falling in love is only an illusion. 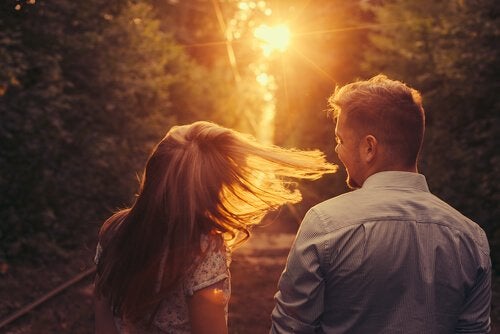 I would always see her walking through the hallways at school. I’d try to sit close to her just so that I could admire her beauty. Her face transmitted peace and serenity. Her hair was long, wavy, and dark. She was physically perfect. She was the kind of girl I always longed for.

On occasions, we’d exchange looks and sometimes greet each other. In those moments, my voice would always tremble. I never knew what to say. I finally realized I was falling in love with her. What I was yet to find out was that falling in love is only an illusion.

Patricia was the kind of girl I always wanted to be with. And there we were, in the same room every single morning. When I came across her, I smelled a delicious perfume that would invade the whole atmosphere. When she greeted me, my legs would always shake.

I’d always imagine walking through the city streets with her by my side. Talking about the beautiful and strange buildings, commenting on everything around us. We’d sit on a bench and talk and laugh. After that, we’d go somewhere to eat and have a good time. Then, one day, we’d hug and kiss. Every time I looked at her at school, all those thoughts would invade my mind.

One day, while I was eating lunch with one of my classmates, she sat next to us. How was this even possible? It seemed like they had known each other for quite some time. I had no idea! I started getting really nervous. The girl of my dreams was sitting right in front of me. She was beautiful. I thought she was perfect. I fell more and more in love each day, but I also felt scared of disappointing her.

The illusion of a special connection

We started having lunch together more often. We’d talk about many different things and laugh. We would always ask for the menu. She liked soda, but I preferred to drink water. She liked salad and I liked pasta. I would ask for fruit for dessert, whereas she’d ask for a flan. I’d look at her in the eyes and imagine us on some island sunbathing and swimming in crystal clear waters.

We kept seeing each other more and more. It seemed like she was interested in me, too. Up to this point, I had been in love with her for about a year and a half. One day, we decided to go grab a cup of coffee. We had a nice time. We had different hobbies but I didn’t mind. I realized we completed each other in spite of that. She’d do certain things that would make me think there was a special connection between us.

The time had come

Patricia sat next to me at the school cafeteria on a winter afternoon and said: “I have to tell you something.”

I started shaking immediately. The time had come.

“The thing is that I’m falling in love with someone. I hadn’t told you before because I don’t like to talk about these kinds of things, but I just don’t know what to do.”

“But what’s the problem? The person you love doesn’t love you back?” I asked.

“He lives in a different city. See, we rarely ever see each other and I don’t like long-distance relationships. People say they’re tough.”

At that moment, I stopped listening to what she was saying. I plunged into a dark, bottomless pit. I looked at her and felt a rage I hadn’t experienced in a long time.

So she’s in love with someone else? She had given me signals! What was going on? This couldn’t be true, I’m supposed to be the one she’s in love with. I had secretly loved her for such a long time but I had never shared my feelings with her.

I didn’t want to keep listening to her. In fact, I didn’t want to see her again. I was so disappointed. I was so excited about being in a happy relationship with her in the future when, in reality, I had no chance with her. Although I loved her, she loved another man. Nothing made sense anymore. I couldn’t believe she gave me false signals.

A few months later, I met an old man on the bus on my way home. We were sitting next to each other. It was an hour and a half long drive, so we definitely had time to talk.

We were talking about many different things. I decided to tell him my disappointing love story. To my surprise, the man looked at me tenderly and said with a smile: “The problem is that you weren’t really in love with her.”

“I’m sorry?” I asked, confused. I had loved her for more than a year, how could I not be in love?

We didn’t say anything for a few minutes. I didn’t understand what he meant. I didn’t know what facial expression to make. The old man continued to look out the window and smile.

Then, he turned to me and said: “You were probably interested in that girl because of her physical appearance and, from there, you started imagining a happy life by her side. You were excited and hopeful, but you didn’t actually know her. Little by little, you started idealizing her.”

When you started noticing her more and more, you paid attention to the aspects you liked. At the same time, you began to ignore her flaws. You thought that she would make you happy. You basically left your happiness in her hands. I’m sorry, my friend, but that’s not love, that’s infatuation. That’s why you were so disappointed. Love is real, authentic. True love is when you don’t expect anything from the other person and, in turn, would do anything for them to be happy.

You interpreted her signals as gestures of love because that’s what you wanted. You were the writer, director, and producer of the romantic film you created in your head. And you ended up believing it so much that you were completely disconnected from reality. However, don’t worry, that happens to all of us. It’s not uncommon for us to fall into that trap at least once. If you really loved her, you’d want her to be happy even if it’s not with you. So next time, think if you’re really falling in love with the person or if you’re just creating irrational expectations in your head.”

Falling in love is an illusion

The old man continued, “As José Ortega and Gasset said: ‘We fall in love when our imagination projects nonexistent perfection upon another person. One day, the fantasy evaporates and with it, love dies’. Interesting, isn’t it? It took me a while to memorize it, but it had such a great impact on my life that it was impossible for me to forget it. Now it’ll also help you.”

The bus ride was over. I said goodbye to the old man. I got home, greeted my parents, and sat on the couch. After that, I proceeded to think about everything the man had told me. It seemed crazy at first, but when I analyzed it, I realized he was right.

It was true, Patricia never had feelings for me. My mind had created everything. I still remember what he told me: “If you really love someone, wish them well, wish them happiness. Don’t see what they can do for you but what you can do for them. If they’re suffering, help them. That’s what love is all about: helping others and making them happy. If that person loves you too, I assure you that’ll be the greatest relationship you’ll ever experience.”

All of a sudden, everything made sense. I began to read about falling in love and found an interesting article written by Chóliz and Gómez (2002) where they affirm that attractive people have advantages over those who aren’t. We begin to attribute desirable characteristics to them just because they’re good-looking. In addition, it makes us treat them better.

Thanks to the old man’s wise words and everything I was reading, I became more and more convinced that falling in love is an illusion. That’s why it’s important to be aware of the expectations we create in our head.

Every time I meet a girl now and feel an instant emotional activation inside of me, I repeat several times: “Falling in love is an illusion”.

“Falling in love and having a relationship are two very different things.”

The Chemistry of Love: Why Do We Fall in Love?
It might not be a very poetic way of talking about the subject, but we can't avoid this question: why do we fall in love? Learn about the chemistry of love. Read more »
Link copied!
Interesting Articles
Emotions
7 Strange Emotions we all Feel Sometimes

Wellness
When We Give Everything But It's Not Enough

We live in a world in which, sometimes, customs and traditions weigh on us like requirements. At some point in our…

Fear is a completely natural human emotion that guarantees survival. But taken to the extreme, it has the power to…

Wellness
When We Let Injustice Prevail Because We're Afraid of Conflict

Our daily lives are full of situations that may lead to conflict. You're standing in line and suddenly someone sneaks into…

Wellness
Forgetting is a Word that the Heart Does Not Understand

When your love for someone is true, it leaves a lasting mark; a memory that will always be rooted to…