Some Dreams Prepare You to Face Your Fears

Many of your fears and anxieties appear in the form of bad dreams. The good news is that science now has some insight into how dreams could be a psychological mechanism to prepare you to deal with your everyday life fears. 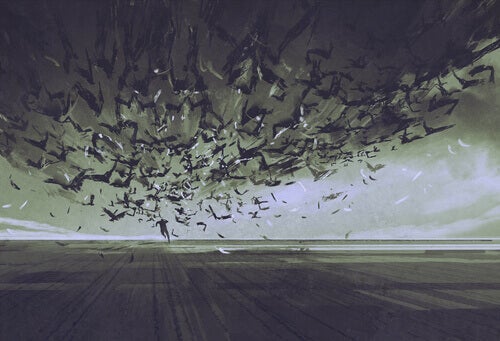 Some dreams prepare you to confront your fears. Thus, the dream universe to which your brain takes you every night sometimes fulfills a sort of therapeutic purpose. According to recent studies, many of our anxieties and fears arise in that unconscious setting to help you regulate their impact on your conscious life.

The data is striking, to say the least. For example, thinking that a bad dream or even a nightmare has a specific purpose for your balance, adaptation, and well-being is something as interesting as it is surprising. Above all, because few things are as enigmatic in the dream world as that dimension that, until not long ago, was completely beyond human understanding.

For example, bad dreams were mere diseases of the mind throughout the eighteenth century, just as those states where human suffering manifests itself. This idea changed over time. Thus, today, experts in the field such as Dr. Deirdre Barrett, a clinical psychologist at the Cambridge Health Alliance, define them as emotional responses that are part of human evolution.

Children between the ages of three and six experience more nightmares. The environment for them is full of things that they don’t understand, of dimensions that they interpret as threatening and that end up appearing in their dreams in a terrifying way. As they grow up and mature, those harrowing dream worlds fade away.

Dreams prepare you to confront your fears

A very specific type of strategy is usually used for getting patients to reduce the intensity of their emotional response to certain fears, phobias, or situations that generate high stress within cognitive-behavioral therapy. This approach is exposure therapy, in which a person is directly placed near that focus of anxiety. Yes, they’re highly controlled situations at all times.

Curiously, all humans come out of the “factory” with a similar mechanism for the same purpose. One with which to help you confront your fears. In addition, this very human resource is much more realistic. They’re dreams, of course. Everyone’s had some experience in that dream scene in which they must confront their most adverse fears.

A job interview, an exam, getting on a plane, fear of abandonment, or being betrayed by your significant other, among others. Each of these situations is, for many, a source of real anguish. The brain knows this. It’s aware of it. In fact, it often transfers it expressly to dreams for an adaptive purpose.

What a person would seek with it is to expose themselves to those fears in order to give visibility to their problem and push themselves to solve it. However, it often does so by using complex symbologies that aren’t always easy to unravel.

It may be hard to believe it. Thinking that your bad dreams would have the function of helping you face your fears is difficult to accept for several reasons. Mainly because unpleasant dreams generate discomfort. Thus, it isn’t easy to assume that something like this can help you with anything.

Secondly, there’s another circumstance: that many don’t remember their dreams. So, how do you explain such a purpose? Last year, the University of Geneva at the Geneva University Hospitals and the University of Wisconsin published an interesting study.

Something one could see through a long investigation is that fear intensely activates your cerebral amygdala. That is the structure in charge of generating the sensation of fear and alarm. In this study, participants had to write down their dreams every night and try to understand them. They had to give them meaning.

Many of those bad dreams had to do with real problems, situations of stress and anguish. Simply understanding the message of those dreams helped them reduce their emotional burden. Also, it helped them develop coping strategies.

However, those responsible for the study on how dreams prepare you to face your fears highlight that nightmares don’t serve the same purpose. These, unlike bad dreams, where fear is moderate, contain an excessive intensity of emotions, which has a very negative impact on a person’s health.

The dream world, a space to confront and understand yourself

As one of the researchers, Dr. Lampros Perogamvros, points out, a goal would be to use dreams and their understanding as a way to treat anxiety disorders. It wouldn’t be an exclusive form of therapy but a tool with which to approach the focus of the problems, as well as a way to regulate the emotional impact.

In a way, this idea fits in with what Carl Jung once said: the unconscious world and the fabric of dreams seek nothing more than to restore psychological balance. It’s one more channel to understand and use to one’s benefit. Therefore, it would be a matter of recording your bad dreams. Also, a way to understand them, accept them, and generate changes in your conscious lives to confront your fears.

It’s a complicated but interesting task that’s well worth getting involved with, no doubt.

“Hold fast to dreams, for if dreams die, life is a broken-winged bird that cannot fly.”

The Symbolism of Dreams According to Jung
The symbolism of dreams in the Jungian analysis is much richer and interesting. Carl Jung stepped far away from idea that they're about unfulfilled desires. Read more »
Link copied!
Interesting Articles
Curiosities
Cells Light Up Before They Die, According to a Study

Curiosities
Why People Become More Impatient As Time Goes By