Are young people well-informed about sex? Do films and series represent reality? Sex Education is a series that dares to speak openly about young people's concerns about sex. 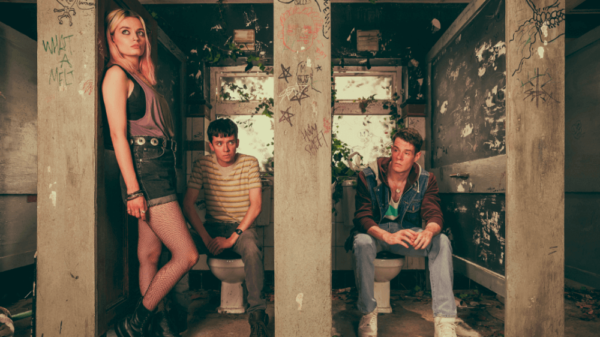 Most people love teen shows when they’re young but can’t believe they liked them as they get older. Many, many series out there fit in this category. Although some are more successful than others but no doubt this is an infinitely exploited genre. Young people consume series and make a series. However, time has taken its toll on most of the subjects they’ve explored, and there’s not much left to tell. At least that’s what everyone thought until Sex Education, a British series, premiered.

The problem with this type of series is that they thrive on the type of archetypes that have been endlessly squeezed: the all-star student, the most popular, the pretty girl, the homosexual, the nerd, etc. The explored themes don’t leave too much to the imagination either. A movie will usually have a love affair, family problems, or bullying. Including a gay character was kind of new in the 2000s but it’s quite predictable nowadays.

This series doesn’t step away from such stereotypes but it does present something that, until now, teenage series hadn’t dealt with: sex education. To this, one must add that, for the most part, teen shows tend to be about drama. Consider 13 Reasons Why, for example. It addressed suicide in the first season but then became just another teen show.

These ideas aren’t necessarily bad, it’s just that the world already knows that adolescence is a difficult stage full of changes. So why not deal with it in a humorous way? Why not laugh at your teenage self? Sex Education does a good job of not only topping audience charts but approaching adolescence from a more humane and, of course, comical perspective.

“Everyone has bodies, right? It’s nothing to be ashamed of.”

WARNING: The following part of this article contains spoilers.

This British series has had many viewers since its premiere in January 2019. It captivates teenagers, but also adults. This is because, far from focusing on love affairs and stereotypical adolescence, it takes a different direction and the result is a fun and ironic educational series. There’s a critical perspective of society and, in particular, common questions about sexuality also manifests in it.

The plot revolves around Otis Milburn (Asa Butterfield), a teenager who’s nearly invisible at school. However, this doesn’t bother him, as he enjoys his anonymity and prefers to lead a quiet life. This isn’t the case with Eric, his best friend. He’s a young man who wants to stand out and be popular but is often the target of bullies. Eric is the archetype of the gay boy whose family, of African origin, is rather traditional. Thus, he’s afraid to come out of the closet.

However, Sex Education takes it upon itself to challenge this by introducing a father who’ll end up accepting and loving his son just the way he is. The interesting part is to see how some well-positioned adult characters don’t escape prejudice either.

There’s prejudice in the character of Otis’s mother, who’s rather smothering despite her independence and openness. The same goes for director Groff, who leaves much to be desired as a father in spite of his high social standing.

Something similar happens to Jackson, the popular boy and athlete. Jackson comes from a wealthy, same-sex parent family, which would lead one to think he has no problems at home. However, he’s under enormous pressure and forced to compete as a swimmer and be the best.

Sex Education shows it isn’t easy to be a teenager. Also, that, sometimes, prejudices have little or nothing to do with social position or place of origin.

On the opposite side, there’s Maeve Wiley, a young woman forced to grow up fast. This is because she lives in a trailer park without the support of her family and is a brilliant student against all odds. The approach is different even though many of these characters are still archetypical.

Every character has fears and insecurities and “wears” a mask for self-protection. Sex Education treats every single one of them with respect and explains them in detail. This really helps the viewer understand the complexity of their realities.

Ok, so the characters are well developed and not too stereotypical, but what’s truly important here is sex. Are young people well informed? In an era when information is at everyone’s fingertips, one would think that every teenager knows all there’s to know about sex. However, Sex Education shows the other side of society, the ideal side of sex, and, as a consequence of believing people know everything, some fundamental questions are left aside.

For instance, Otis learned everything there’s to know thanks to his mother, a sexologist. With this knowledge, he sort of becomes his school’s sex therapist. The sex scenes are quite explicit but funny at the same time.

They’re insecure teenagers who have learned thanks to the Internet. However, they soon learn that real sex isn’t the same as what they’ve seen on the screen. The first sex scene is tremendously revealing: a young man faking an orgasm. And yes, a man, not a woman.

The big screen often shows women faking orgasms as if only they did it. How many men have found themselves in this situation? Based on what you’ve seen in films, none or very few. Thus, this initial scene is an act of rebellion. It indicates that the viewers are about to immerse themselves in a TV series with no sexual taboos.

Sex Education, as its name suggests, is a kind of sex education, only handled humorously. More than education, one could say it normalizes it while raising awareness.

Otis’ queries cover all kinds of issues with a common link: breaking taboos and showing reality. That fascinating and idyllic first-time idea has long gone by. On the opposite side, pornography proposes a hard-to-reach ideal that’s far from reality.

The result is likely to be catastrophic if you take either of these two ideas as a reference. This doesn’t mean people shouldn’t have some exposure to pornography, only that adults must inform teenagers that what they’re seeing isn’t real. Likewise, the first time can be beautiful but sex is something you only get right over time.

At the same time, there’s a young woman who’s obsessed with alien erotica and wanting to lose her virginity. There’s a large variety of characters but it’s a sample of the plurality of reality, of the various experiences that can occur around sex, especially during adolescence.

Adolescence is the moment of sexual awakening and first experiences. Knowing your body and tastes is essential, but it isn’t so simple in practice. Sex Education hardly leaves anything in the pipeline, though. It deals with problems such as cyberbullying, the dangers of the Internet, and the content people share. Thus, it blurs gender issues and basically makes fun of everything. It even deals with the subject of normalized and conscious abortion.

Maeve is too young to be a mother. Her family and financial situation are unstable and she can’t guarantee a future for her child. Thus, she opts for an abortion. There are protesters outside the clinic, but they end up talking to Otis and reaching an understanding. Of course, both sides maintain their ideas and won’t change them so easily, but they manage to carry out a thoughtful, respectful debate.

Likewise, the series sort of eliminates gender roles. For instance, Eric wants to dress up to go see Hedwig and the Angry Inch, a musical that deals with transsexuality. Otis is his best friend and doesn’t hesitate to do so in spite of being straight, challenging the preconceived notion that cross-dressing is a homosexual thing.

Sex Education is a necessary series young and old people can learn from. The comical tone helps keep the viewer’s attention and break the ice regarding sex. Despite the fact that we’re in the 21st century, sex is still taboo in Western society. It isn’t something people talk about on a daily basis and it isn’t easy for many parents and educators to constructively talk about it.

Even the most experienced adults don’t know everything about sex and it isn’t easy to put ourselves in the shoes of teenagers. Thus, this is a particularly entertaining show that challenges social barriers and appeals to communication and understanding. Each character experiences their sexuality in any way they can as they explore themselves and learn. Finally, Sex Education embraces people, differences, laughter, and, above all, dialogue.

Understanding Teenagers: What’s the Best Way to Work with Them?
Would you like to improve your relationship with adolescents? Here are some guidelines on understanding teenagers. Read on and find out more. Read more »
Link copied!
Interesting Articles
Cinema, Television, and Psychology
This Short Will Show You the Richness of Uniting Our Differences