It's time to reinvent yourself when confronted with a new reality. This is just what happened to the popular teenage witch Sabrina Spellman as her creators reinvented her to fit modern times. The new adventures of the young witch have a darker perspective and hide a metaphor for your own reality. It intends to reconcile cultures, changes, and new points of view. At the very least, this is what the new Sabrina proposes. 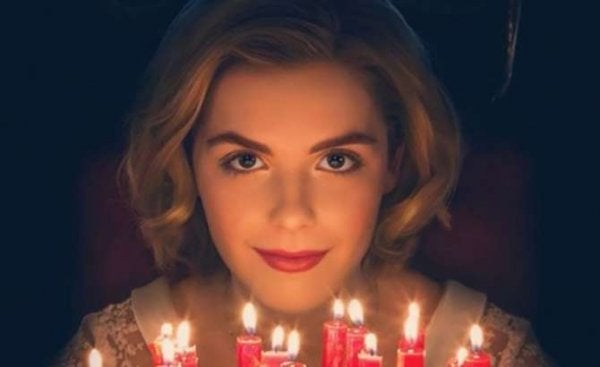 Sabrina Spellman is a character in Archie Comics. Her popularity led to various versions. Perhaps, the best-known one until recently was the TV adaptation: Sabrina the Teenage Witch (1996). During the 90s, Sabrina, played by Melissa Joan Hart, enjoyed great popularity. Currently, a new version of the young witch is once again on the screen; this time, through a Netflix series.

Times have changed in Chilling Adventures of Sabrina (2018) and the humorous and innocent tone of the 90s series is gone. The new series is darker and a bit more disturbing. Sabrina Spellman (Kiernan Shipka) must choose between two paths and worlds: being a mortal or having witch powers.

The series is full of allusions to the world of comics, popular culture, and Satanism, thus drawing a darker environment. It does have a certain retro air, however. The audience finds themselves in a very dark place, with elements from the past. Its fashion is more characteristic of the 60s than of current times and this makes it difficult to know the era.

Chilling Adventures of Sabrina sets aside the light-hearted tone of the ’90s and is no longer a family comedy, but something darker. Despite the magic and fantasy of the series, it also deals with real-life social problems such as bullying. Even though Sabrina is at the center of the series, the duality that her character embodies: a mortal who is also a witch, is also very important to the story.

“I want both: freedom and power.”

This is an era in which TV series are more than abundant and, thus, the way people consume them has changed. This is because people no longer care sitcoms with laugh tracks and want something deeper. At the same time, this series maintains the humorous tone of the 90s but it also uses dark humor. In it, death is often funny and the witches’ own religion will lead them to the most insane situations.

Salem, the warlock condemned to live in the body of a cat, is one of the missing elements in the new Sabrina series. He could speak and was rather self-centered. Eventually, he became a great mentor to the young witch, a situation that was often humorous.

The essence of that previous character is no longer present in the new adaptation. The new cat doesn’t talk, so it’s just a common cat. Witches have a “familiar”, a sort of protective animal that helps them. As you can see, this is precisely the role of the new Salem character.

Among the characters in the new series, there’s Ambrose, who’s Sabrina’s cousin. This character sort of replaces Salem’s previous role, as he’s Sabrina’s advisor. One of the innovations that the Netflix series proposes is it perfectly adapts to the current times and, therefore, to the younger audience.

Far from presenting a completely normative with archetypal, mythical characters, the series offers many types of characters. Thus, it’s believable to a certain extent. For example, Sabrina is an imperfect protagonist who often makes mistakes and must face countless moral dilemmas.

In contrast, Zelda and Hilda, the two equally iconic and unforgettable characters, are still there. Both continue to embody the values ​​they presented in the 90s series. Hilda is innocent and good-natured, while Zelda is serious and responsible. However, she shows tremendously conservative values ​​and great devotion to the Church of Night on this version. Despite the similarities of the characters, the new ones no longer live in the happy white house of the 90s but in a dark and gothic building where they run a funeral home.

Adolescence is a stage full of questions, changes, uncertainty, and decisions. So Sabrina, like any other teenager, begins to question the world around her. However, she must also fight to try to bring her two worlds together. Due to her dual witchy nature, Sabrina must go to two different schools: a regular one and a witch academy. As different as their cultures may be, the problems she must face are very similar in both institutions, bullying and segregation among them.

The audience also notices that Sabrina’s environment is different in high school. Her best friends there are Roz, a young black woman who, like Sabrina, must fight the system; and Susie, a victim of bullying because she identifies herself as non-binary. In other words, this a minority trying to find its place in the middle of a more traditional community.

These characters are really well-drawn. The series really delves into their lives, both past and present. They, along with the character of Ambrose, who identifies himself as pansexual, represent a revelation in the television universe. In the light of injustices and oppression that women feel within the institute, Sabrina and her friends start an organization by the name WICCA. This is obviously an allusion to the pagan religion linked to witchcraft.

Thanks to this organization, women have a place where they can meet, read books, and talk about them and, in turn, defend themselves against the injustice brought about by patriarchy. This image of Sabrina as an activist who’s also vindictive reflects in her witch academy. There she must also deal with her status as a minority (a consequence of her nature) and with the abuse of the “Strange Sisters”. In turn, Sabrina must decide either to give her soul to Satan and forever be a part of the Church of Night or renounce her power.

Sabrina’s new adaptation presents a metaphor for the current era where cultural and generational shocks often trigger conflicts. Even though the two worlds are completely opposite, the problems seem to the same. In the world of witches, the High Priest and aunt Zelda embody the most archaic values ​​of the Church of Night. Thus, they never question anything and become upset over the slightest change.

In the world of mortals, a large part of the inhabitants of Greendale come from families that participated in witch-hunts. Sabrina’s friends, especially her boyfriend Harvey, have a past rooted in the persecution of witchcraft. However, it seems that the younger characters aren’t prejudiced and don’t get carried away by sociocultural impositions. This is how you see it, for example, in Sabrina’s relationship with her family and in Harvey’s with her father.

The new generations grew up in a different environment where the values also changed. Sabrina doesn’t want to give up being a witch, but she doesn’t want to be mortal either. Thus, it represents a new reality and will try to reconcile both traditions even if it’s hard. It’s never easy to bring two cultures together, even less during adolescence.

The series raises an infinite number of moral questions. Sabrina isn’t always right and, sometimes, she acts without thinking about the consequences. She grew up aware of her double nature and doesn’t want to give up her identity. But why choose? And why to be one thing she must exclude being another? Instead, why not reconcile her two identities? Above all, why maintain a tradition that no longer makes sense in the present time? The series also raises questions that pertain to free will and to the young witch’s own destiny.

Sabrina Spellman denounces some of the most ancient traditions of the Church of Night, such as human sacrifices. She shows that young generations grew up differently and are open to change. In short, this is the reinvention of a classic character who, without losing her essence, adapts to the new demands of the contemporary world.

Fairies and Witches: Female Stereotypes in Fairytales
Traditional children's literature represents a sexist view of reality. The myths about fairies and witches are some of the most prominent ones. Read more »
Link copied!
Interesting Articles
Cinema, Television, and Psychology
The Hobbit: Getting Out of Your Comfort Zone

The Hobbit is a series of movies directed by Peter Jackson. Based on a novel of the same name, they're part…

Cinema, Television, and Psychology
Beauty And The Beast - Bringing A Classic Up To Date