Severus Snape: Who is Who in Harry Potter?

What began as a children's story has become a success story that has also won the hearts of adults all over the world. One of the keys to the Harry Potter saga is the depth and complexity of its characters. And, perhaps, one of the characters that best embodies the duality of human nature is Severus Snape – the heartbroken man who built a shell to hide his true goodness. 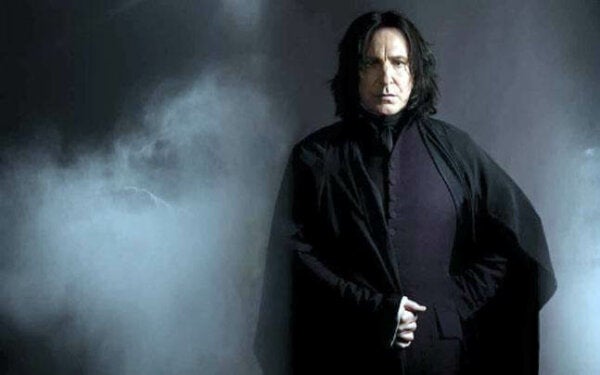 Severus Snape is one of the most intriguing characters in the Harry Potter saga. Rowling fooled us all, making us believe that Snape was a real villain and that all he wanted was for Harry to suffer. However, she had a huge secret prepared that change everything. Alan Rickman, the actor who brought the character to life, was the only one privileged to know the truth about the Potions professor.

We all shed a few tears when we discovered that, after all this time, Snape still loved Harry’s mother Lily and that, in fact, everything he had done was to ensure the young man’s safety. That part of the story where we finally understand everything Snape has done, and where we realize why Dumbledore had protected him so much, has become one of the most applauded by fans of the saga.

Snape has carved out a place for himself among the most remembered and loved characters in the saga. But those words and that moving scene hide something else, something much deeper that Rowling has let us catch a glimpse of throughout her seven books. Are some of the characters real heroes? Is there such a thing as pure goodness?

Snape works a bit like Dumbledore’s antithesis. For a long time, we thought that, without a doubt, Dumbledore was the good guy and Snape was the bad guy. However, the roles of good and evil seem to blur over time. Thus, we’re faced with the question: Who really is who in Harry Potter?

From The Philosopher’s Stone, we realize that Dumbledore never doubts his trust and loyalty; he believes deeply in repentance and second chances. Meanwhile, other characters, like Harry, try to unmask him. Harry’s plans almost always fail, and Snape comes out on top every time.

As readers or viewers, we’re surprised that no one besides Harry and his friends is aware of Snape’s evil. For this reason, it’s a much bigger surprise when we discover the truth. We’re drip-fed with information about his past bit by bit. We know that Snape has the dark mark, an indication that he was once a Death Eater. Because of this, quite naturally, we identify him as a villain.

Thanks to Lupin, we sense more about his past, discovering that the bad relationship with the Marauders comes from his stay at Hogwarts. Through the classes of Occlumency and Legilimency that Severus offers to Harry, we notice some aspects of this bad relationship. For example, we see a teenage Severus Snape being bullied by James Potter, Harry’s father.

Who are the nice people?

Rowling demystifies, in part, the heroism of Harry’s father. We don’t doubt that James was a good man, but it’s true that, during his adolescence, his mocking of Snape shows an unpleasant and cruel side to his character. We see James as the leader of his group, the popular joker who’s always looking for trouble. Somehow, Rowling is telling us that even the nicest people are capable of committing reprehensible acts.

In contrast, his relationship with Lily Potter was quite different. They met as children and became great friends. Snape already knew about the world of magic, and was, in some ways, a key figure in Lily’s childhood.

Lily’s parents were Muggles (non-magical people) and when people discovered she was a witch, then a whole world of strange names opened up to her. This relationship will be key to discovering more about Snape as an adult in the Harry Potter saga.

The Snape that we get to know in the saga shows himself as a dark, cold, and frustrated man professionally, and probably also personally. Snape is pedantic, arrogant, and lacks empathy. He seems to somewhat favor the students of the house of Slytherin, of which he is the head.

He harshly punishes “know-it-alls” like Hermione and those he considers to be stupid or unintelligent. But he saves most of his venom for Harry, whom he punishes especially harshly. Snape takes out all his past frustration on Harry, whom he sees as a reflection of his father and, consequently, as an enemy and rival.

All his actions lead us to believe that he’s on the side of Voldemort and the Death Eaters. Our suspicions are confirmed when we discover that Severus Snape is indeed one of them, and that he even murdered the person who had always trusted him: Albus Dumbledore. Behind all this darkness, however, lies a man who’s suffered, and who’s a victim of his own past.

Snape’s dual nature has been present throughout the saga. He appears to do something wrong and yet, in the end, it turns out that he was acting in Harry’s best interests. This is repeated again and again until his death.

This apparently irrational hatred hides a greater complexity than we could have possibly imagined, turning Severus Snape into a character whose evolution is one of the most significant in the whole saga. Rowling cleverly built a character that we all grew up hating, and yet one whom we would eventually end up loving.

Rowling plays around with the questions in our minds. Is Snape a repentant mortal? Is he a spy for Dumbledore or for Voldemort? Which side is he on? This shows that, sometimes, our senses deceive us. What we see in someone else, or the image they project, may not be a true reflection of what they’re really like.

The Harry Potter saga grows in perfect harmony with its main character. When we read The Philosopher’s Stone, we find a book for children, where evil and goodness seem to be the two extremes. However, as we progress, Harry grows up and, at the same time, the complexity of the books increases. What seemed to be a children’s story has now become a dark and nuanced one.

In The Deathly Hallows, the last book in the saga, we realize that there are no longer any people who we could classify as good or bad. What we do see are characters whose actions come as a result of their difficult past.

Voldemort might not be the dark wizard we thought he was as we see glimpses of his slightly happier childhood. And, in the same way, we understand that “good old Dumbledore” wasn’t quite as good as we thought he was.

As for Snape, we see that, behind his dark exterior, lies a devastated heart, a man who’s suffered, but who still loves. The revelation in the pensieve is one of the most momentous parts of the saga, a time when Harry and the reader reach maturity.

Dumbledore has been preparing Harry to die at the hands of Voldemort all this time, while Snape has been looking out for him at the risk of his own life. Does this make Dumbledore a bad guy and Snape a hero? The truth is never as simple as this; the world isn’t only made up of good people and bad people – there are nuances in between.

Snape’s story moves us deeply; he’s the repentant mortal who sacrifices his life for the son of the person he loved. Harry names his son after both Hogwarts directors: Albus Severus. In this way, he shows us his forgiveness, his acceptance of their mistakes, and his love for both of them. Because, in the end, we all make mistakes, we can all act wrongly in certain situations.

Alan Rickman was, without a doubt, magnificent as Severus Snape and a perfect guardian of Rowling’s secret. Unfortunately, he left us prematurely without being able to keep his promise to be still reading Harry Potter at the age of 80.

Thanks to him, we were able to enjoy Snape on the big screen; his memory and his perfect interpretation of Snape will live forever in the hearts of the saga’s followers. For all these reasons and more, we can say that Severus Snape is one of the most complete and fascinating characters in the Harry Potter universe.

Harry Potter Fandom: An Extraordinary Phenomenon
Harry Potter fandom is one of the largest, most active and productive in the world. We'll be asking some questions about their possible evolution. Read more »
Link copied!
Interesting Articles
Cinema, Television, and Psychology
Grease Make Sense in Today's World?