What are the most self-destructive behaviors in romantic relationships? Discover the answer to this question here! 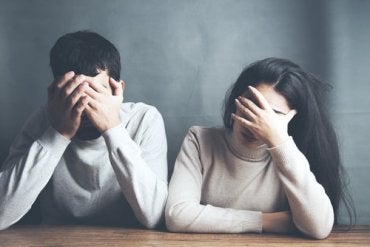 Romantic relationships typically involve a bond between two people. That bond is something you have to cultivate every day. This means being around each other a lot, which can lead to conflicts. But if one or both partners has self-destructive behaviors, it could end up destroying the relationship.

Dr. John Gottman is one of the pioneers in the study of romantic relationships. After studying countless couples for years, he states that there are some clear patterns of self-destructive behaviors that can accurately predict the failure of a relationship.

However, some relationships seem great. That is related to a series of specific ingredients and behavioral patterns that can help predict how long a relationship will last and how good it’ll be. No matter the type of relationship, there has to be respect, affection, trust, and communication.

If you find yourself in a relationship with those ingredients, you’ll probably be happy in it. Although you may have the occasional argument or conflict, it won’t rock the boat too much. On the other hand, if you feel like any of those ingredients are missing, you may need to try to work on those aspects with your partner.

“Love isn’t something natural. Rather, it requires discipline, concentration, patience, faith, and the overcoming of narcissism. It isn’t a feeling, it’s a practice.”

Self-destructive behaviors in a relationship

As we mentioned above, some self-destructive patterns of behavior predict that a relationship won’t last. In this article, we’re going to talk about the ones that seem especially relevant and directly affect the basic pillars that hold any healthy relationship together: respect, affection, trust, and communication.

Feeling contempt towards your partner means considering them inferior to yourself. This could also lead to other behaviors such as humiliating, criticizing, insulting, and simply not showing your partner respect.

If someone acts this way towards you quite often, the honest truth is that they don’t really love you. In that scenario, you need to ask yourself whether you should stay in the relationship.

This is one of the most self-destructive behaviors out there. Ignoring your partner when you’re having an argument means turning a blind eye to the fact that the person you supposedly love needs communication and to feel supported.

Being ignored can make a person feel extremely humiliated. In the long-term, that ends up affecting their self-esteem. They may even start to believe that they don’t deserve their partner’s attention because they did something wrong.

If you’re in a relationship with a partner who tells you who you need to be, what you should like, and who you should be friends with, among other things, they’re trying to destroy your individuality.

When you love someone, you accept them for who they are. Thus, if your partner is trying to change you, they don’t really love you.

It’s really important to watch out for codependent behavior. Some people can’t get out of a relationship because they feel like they need the other person. They’d rather put up with their constant criticism and indifference for the sake of not being alone.

But that also acts as a reinforcement for the other partner because they see just how much the other person depends on them. This is one of the most self-destructive behaviors out there and it can be devastating for a relationship.

You should always be sincere with your partner and be who you really are around them. But there are also times when you need to be able to give in. For example, if your partner wants you to go to an event with them, you can make the effort even if you don’t really feel like it or don’t find it interesting. Your partner should also do the same for you. This way, you both show each other that you love each other.

Why do people stay in toxic relationships?

People often put up with self-destructive behaviors for far too long. However, you need to remember that everyone makes mistakes sometimes, which is why it’s good for you to be flexible and tolerant with your partner.

The problems start when this becomes a recurring issue and something that defines your relationship. Stop and think about how you’d draw yourselves together. Would you be holding hands? Kissing? Arguing? The image that comes to mind will say a lot about what you really think about your relationship.

If you notice even small signs of toxicity in your partner, you need to weigh the pros and cons and be ready to get out of the relationship if it’s really necessary.

In most cases, people have a hard time breaking things off because they fear being alone. People tend to believe that they’re going to end up totally alone, even though there are tons of people around them for support.

“Why do people avoid being alone? Because only few are in good company when left with themselves.”

Also, people resort to certain thought patterns to trick themselves into staying with their partner. A couple of common examples are: “I’m sure they’ll change” or “If I break up with them, I’m sure they’ll find someone else who’s better for them”.

You have to try to ignore those kinds of thoughts. They’re just a product of your deep fear of abandonment and being alone.

The best thing you can do is stop deceiving yourself and look at things objectively. Observe your relationship. Once you do that, you can try to make a firm decision to either stay in the relationship or break things off.

The Excuses that Prolong Emotional Dependence
There are many excuses that can prolong emotional dependence and make us stay in relationships that are hurting us. Read on! Read more »
Link copied! Next
Interesting Articles
Romantic Relationships
Commitment in Relationships

Romantic Relationships
We Need to Talk: The 4 Words Every Partner Dreads

It feels like the world is going to end when your partner says, "we need to talk." For a second your…

A relationship needs more commitment and less sacrifice. However, many people believe that true love requires sacrifices and constant concessions…

Romantic Relationships
Similar or Complementary: What's the Best Partner for You?

Similar or complementary? That's the question that many people ask when looking for a partner. While some think that "opposites…