Scopolamine or "The Devil's Breath", the Drug that Nullifies Your Will 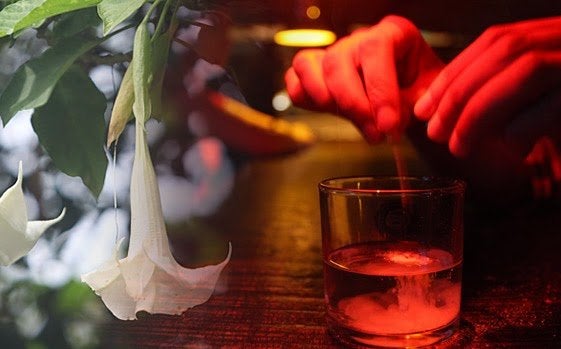 Scopolamine, also called The Devil’s Breath, or burundanga, is a powerful substance almost always associated with crime. Unlike other similar substances, there is no known problem with addiction, and only very few people in the world consume it for recreational purposes. Instead, it is a dangerous substance used primarily to harm others.

However, it does also has some medical applications. Clinically, it’s used to treat tremors caused by diseases like multiple sclerosis. It also has uses in antispasmodic, anti-Parkinson’s and local analgesic medicines.

“Drugs are the enemies of ambition and hope — and when we fight against drugs we are fighting for the future”.

The name burundanga has a Caribbean and Colombian origin. The word comes from the word “morondanga”, which in turn comes from “morondo”, meaning “bald or bare”. This in turn derives from the Latin root “mundus”, which means “clean” plus the suffix “anga”, which is derogatory. So, burundanga means “something that leaves the mind clean or blank.”

The origin of Scopolamine or The Devil’s Breath

Scopolamine is actually an extract from several plants, almost all of them from the nightshade family. There are references to scopolamine use in the Middle Ages. We know that then they used it as a way to learn about love or relationships, as well as in interrogations. Many saw an association between it and the “mandrake”, a plant witch doctors used.

There are also references of it in pre-Colombian times in the Americas, both for ceremonies and healing rituals. There is also evidence that it played a role in voodoo rituals and other ceremonies.

This drug was only rarely used for a long time. However, in Colombia criminal cases began to appear where scopolamine had been used to commit some crime. This began to happen in the 1970’s. Unfortunately, this practice has spread to other countries.

What is this hallucinogen and how does it work?

In addition to going by the names burundanga or Devil’s Breath, scopolamine is also known by other names. It’s called “hyoscine”, “robot drug” “zombie drug” or “Colombian Devil’s Breath”. These negative connotations allude to the awful ways it’s used, as well as its terrible effects.

Scopolamine is a tropic alkaloid, a substance that depresses the central nervous system. In the Americas, it is extracted from a plant popularly known as “borrachero”, or “drunken binge tree”. The name of its fruit is “cacao sabanero” and each contains around 30 seeds. Just a single seed is enough to poison an adult.

Currently, it is rare to see plant-based scopolamine. Now it is possible to synthesize it in a laboratory. Molecules are manufactured chemically and have the same effect as natural ones. On the black market, it is often combined with all kinds of substances. Sometimes, benzodiazepines are added to enhance its effect.

Scopolamine’s main characteristic is that it inhibits a person’s will, affecting their memory and behavior. It blocks certain neurotransmitters and causes the victim to mechanically follow any orders given to them. For this precise reason it has been used in robberies, kidnappings and rape.

Scopolamine sets off many reactions in the body, including:

The consequences of ingesting this substance depend on the amount of scopolamine absorbed and the person’s health. It also depends if it is pure or combined with something else. In general, an overdose is an estimated at 10 milligrams for children, and more than 100 milligrams for adults.

An overdose of scopolamine could lead to seizure, coma or even death. In all cases, the victim of this terrible drug becomes highly suggestible. Likewise, they suffer from amnesia. They are never able to remember what happened while they were under the substance’s influence. That’s why it’s an ideal drug for crimes. The victim will never be able to give details that could lead to the perpetrator’s capture.

Something very disturbing is that scopolamine has effects even after the poisoning occurs. Among the main effects are:

The line that separates a dose from an overdose of scopolamine is very small. When a person crosses that line, it easily leads to coma or death.

The most common ways scopolamine is taken

Scopolamine is taken and absorbed into the body in different ways. One of the most common is orally. Usually, scopolamine is a fine, white, crystalline powder. It odorless and has a bitter taste. Often it is dissolved in a drink that is then given to the victim.

In Colombia, most cases are when young women engage men in conversation in high-end bars. The men offer to buy them a drink and at the slightest carelessness of the victim, the man pours the powder into the drink. Then the perpetrator gets the victim’s credit cards and passwords in order to empty their bank accounts.

There have also been cases in which the substance is injected, in its liquid form, into soft drinks or juices sold commercially. The mechanism is the same: the offender earns the victim’s trust and gets them to drink it.

Other ways to scopolamine is taken

Now we also frequently see cases where people have inhaled scopolamine. The person will inhale some other element that also contains scopolamine. In these cases, the drug works faster and is also more dangerous.

One way it is done is by introducing a dose of scopolamine into a cigarette and getting the victim to smoke it. While inhaling, the effects begin. Also, there have been several cases in which a person simply approaches the victim with scopolamine on a piece of paper and blows it towards their nose. That’s all it takes for the victim to inhale it and become intoxicated.

Scopolamine can also be administered through the skin. People can be tricked into allowing the perpetrator to apply it to their skin in a cream. For example, the perpetrator would pretend to be giving out samples of lotion sold on the street. Taking it like this doesn’t produce immediate effects, but they’re just as powerful once the victim has absorbed the substance.

Authorities recommend taking precautionary measures to avoid being a victim of this type of poisoning:

Criminals use the substance to get children to agree to have sex, but also to record pornographic videos or allow them to take pictures of them naked. Records also indicate that sex workers have used scopolamine to steal from their clients.

Do You Know the Effects of Marijuana on the Brain?
A few minutes after smoking marijuana, your heart rate increases, your blood vessels dilate, your eyes get red, and your blood pressure rises... It is quite obvious that marijuana causes changes in your body.  Read more »
Link copied!
Interesting Articles
Culture
31 Tips from Tibetan Wisdom

What do we seek in the world? Health, peace, money, love? The wisdom of the Tibetan monks provides a possible answer: we seek happiness within ourselves in order to experience it with others.…

We spend most of our days working. Therefore, we should make being happy where we work a priority. If we aren't happy at work, this unhappiness and dissatisfaction can begin to…

Culture
What are the Causes of Gender Inequality?

Culture
Egas Moniz and the Amazing History of the Lobotomy

The lobotomy is one of the most controversial procedures in the history of mental health. It was "invented" by Egas…