The brain multiplies problems as a result of a cognitive bias that leads to the creation and development of patterns, which are then generalized or over-applied without any real reason. 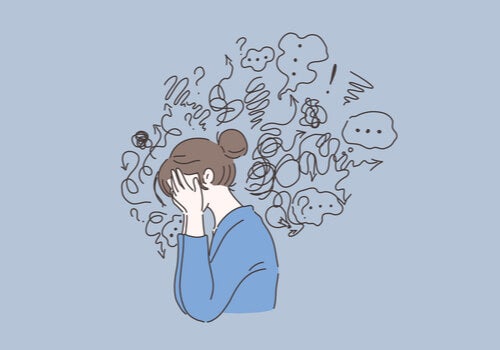 Many people complain that problems always come in twos or threes. They believe that, once the problems start, they never seem to end. In many ways, they’re right. However, this isn’t some unkind twist of fate. Rather, we can attribute this to a cognitive bias because scientists have shown that the brain multiplies problems.

They reached this conclusion when they conducted several different experiments. Thus, why does the brain multiply problems? Well, despite the fact that it’s such an amazing and complex organ, it also has its limitations.

Such limitations stem from the fact that that the mind tends to create patterns for everything to save energy. However, these general patterns can lead to misunderstandings.

The important thing about the fact that the brain multiplies problems is that information allows us to be critical and attentive to how thought works and to impose limits where necessary. Otherwise, the difficulties and emotional expense the brain create could cause unnecessary stress and problems.

“We can’t solve our problems with the same thinking we used when we created them.”

To explain the mechanism that makes the brain multiply problems, psychologist David Levari from Harvard University used an illustrative comparison. He said that, in the face of danger, the brain acts in a similar way to neighborhood watch systems.

Such systems activate when neighbors start to feel unsafe in their community for a number of reasons. The role the neighbors play is to warn the neighborhood about the presence of strangers or suspicious actions that could result in robberies or other crimes. When they detect that something isn’t right, they immediately alert the police so that they can take action.

These systems usually work and allow neighbors to feel relatively safe. However, it’s logical to think that the security alerts would also diminish, but this doesn’t happen. What usually happens is that the neighbors begin to see danger in situations or actions that previously didn’t arouse that suspicion.

It’s as if an alarm that’s been set off can’t be turned off. The brain functions in a similar way. Once alerts are triggered by the presence of a problem (and every problem implies an implicit danger), it fails to “turn off” or block them on its own and tends to feed them back.

After conducting several experiments, experts concluded that the brain multiplies problems. One of the best known ones, which later became a viral test on social networks, was published in the prestigious journal Science.

To conduct the experiment, researchers gathered 1,000 participants with completely normal vision. The researchers showed the participants an image composed of 1,000 dots of colors ranging from a very intense blue to a deep purple. The different shades were distributed at random.

Then, they asked the participants to say which dots were blue and which were purple. During the first session, most identified the blue dots without any problem.

However, in the following sessions, the concept of blue seemed to grow more and more. Thus, in the end, the participants believed that the spots that were clearly purple were blue. What does this mean?

The experiment shows that the brain actually tends to establish patterns in an increasingly rigid manner. That’s why the participants, who at first clearly distinguished blue and purple, then believed that all the spots were blue.

Why does this show that the brain multiplies problems? When we face a problem, a subjective warning signal appears. Then, we make an effort to solve the problem. However, even after we solve the problem, the brain continues to apply the recent risk factors to other phenomena that don’t fall into that category at all.

Here’s an everyday example. A person argued with their boss and the argument affected them. Then, they go to their desk and can’t find their pen, not because it’s lost, but because they’re still affected and confused by the recent argument. It’s not unusual for this person to say, “Nothing’s going well today,” even though that isn’t the case at all.

This happens during pandemics as well, simply because of the size of the problem. It’s not unusual for a violent hurricane or earthquake to be interpreted as a sign of the end of the world, even though this isn’t the case. The brain is simply in alert mode, which is why negative thoughts come to the fore.

In short, you need to be vigilant so that this bias doesn’t hijack situations in your life.

Solving Problems: Why Do We Always Do Things the Same Way?
When solving problems, have you noticed how you often apply the same solutions over and over again, even if the results aren't effective? Why do we do this? Read more »