When Saying Goodbye Is Learning To Do Without 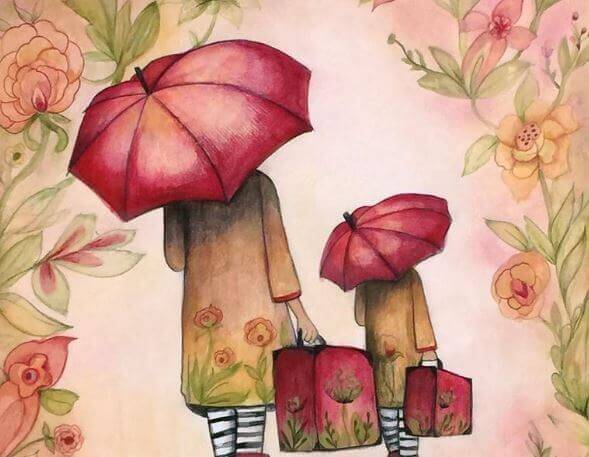 It’s over. Real life is not a happy love movie that the whole world talks about, nor is it that book in which relationships are forever: eternal love, inseparable friendship, family united until the end…In real life, love, in all its aspects, is not always enough, and saying goodbye is often part of the plot.

The difficult part of saying goodbye is when there is no longer room for a possible return; all that is left are empty holes between two or more people. Sometimes, saying goodbye even comes as a fact of life. In other words, the complicated thing about saying goodbye is not the action of saying “goodbye,” it is learning that this goodbye means doing without and continuing on.

We have been told many times that life is like a roller coaster and we have to adapt to the highs and lows that it brings with it. On the other hand, we are often made to believe that a happy life is one where things last forever.

In that contradiction, we find the damage. We feel vulnerable when we discover that our truth is continuously modified, that happiness is not constant, and that sooner or later, we are all obligated to lose so that we can keep on winning.

“Life is often a matter of letting go of what once saved us, letting go of the things that we cling to intensely, believing that having them is what is going to keep saving us from the fall.”

The people who come can also leave, just like when we ourselves come, we can leave. And when they leave or we leave, what is left is what they have taught us and what we have taught them, for better or worse. We have to release what is no longer here, accept, and learn to keep living with the part that they have left us and that makes us be who we are.

Everything that saying goodbye implies

Saying goodbye is one of the hardest moments that we will ever go through, given that it implies many things that alienate us from ourselves and make us lose ourselves. Saying goodbye implies freeing something that we do not want to free and that we want to keep being there.

“Making light even if it costs the night, even if death is the sky that opens and the ocean nothing more than an abyss created blindly.”

In the face of all this, we are left with the strength, sacrifice, and courage that we all possess, even if we do not believe this. We are all able to look at the future, as dark as it may be, and have the courage to confront the mourning, for this is the only way that life will know that we are ready to be happy again.

By learning to say goodbye we grow

Sometimes, we do not even have time to say goodbye: as a fact of life, someone that we loved a lot has to leave, even if they keep being with us. Other times, we are saying goodbye before we realize it: nobody is more vulnerable to believing something false than the one who wants a lie to be true, as Jorge Bucay would say again.

The test of a goodbye, as we said at the start, is in seeing ourselves being happy after saying “goodbye.” When this happens, we will have gone through an entire process of slow inner healing, of the search for what we were, want, and can be for ourselves.

The most well-known and widely-used self-esteem test is, without a doubt, the Rosenberg scale. While the test is over five…

Wellness
8 Things You Have to Stop Doing to Feel Good

We usually make countless promises to change our lifestyle and to feel good about ourselves. It is important to follow through…